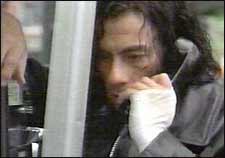 Yes, yes, we know all about 'em mounds of muscle on his body, but guess what? We've found a few Mr. Damme hasn't exercised in ages - those on his face. However, going in gleefully for another round of Damme-bashing, I was admittedly pleasantly surprised to see that muscle boy still had a little something up his sleeve.

Retiring (as in getting tired repeatedly) cop Jake Riley has a small run-in with his long-time nemesis, Torch, on his last day (wow, how ironic!). Now Torch is a notorious serial killer with a small, niggling preference for young moms. And guess why he's called Torch? Yeah - he burns 'em. Pyromania rocks! You can hardly bear to listen to Jake talk 'cos his voice is just a little more irritating than fingernails on glass.

Anyway, Riley is lured by the 'National Security Force' promising to help catch Torch. Now hear this. The NSF has cloned Torch from a strand of hair, and this 'replicant' is going to lead them to the original because...well, you're sorta supposed to be so boggled by the mindnumbing genius of this achievement that how exactly this helps is somewhat lost. So Replicant is chained to Riley because they want them to 'bond'. Raspy treats him like shit, and he loves it. Oh yeah - it's these twin characters, Torch and the Replicant, that are played by Van Damme! He's not the cop - break out the bubbly!

So Riley puts Repli through the basic paces in life, and the Muscles from Brussels does a damn good job as the expressionless, dialogue-less clone. Ah, no wonder he did such a good job. Anyway, Claude the clone - meet the real McCoy Torch. They start having those 'twin' feelings about each other. The main reason you're still sitting there is to see what happens to clone boy - does he succumb to his true genetic identity, or does he do what he was created for? 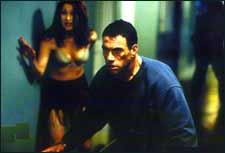 The science is absolute crap. For example, how can a clone 'remember' things he's never seen or done? But then, if Hollywood were to stay scientifically correct, I think one Mr. Issac Newton would like to have a little chat with one Mr. Jet Li about that crazy little thing called gravity. That apart, ol' JC has done really well because you actually feel sorry for Replicant and can believe Torch's character. Of course, the script was tailor-made to his talent for non-acting, but it was quite refreshing to watch Van Damme in a double role and as a baddie. And for once, he wasn't able to use his martial art skills - yay! Michael Rooker is decent as the cop Jake, except for that voice... shudder!

ADVERTISEMENT
This page was tagged for
The Replicant english movie
The Replicant reviews
release date
Jean-Claude Van Damme, Michael Rooker
theatres list
Follow @fullhyderabad
Follow fullhyd.com on
About Hyderabad
The Hyderabad Community
Improve fullhyd.com
More
Our Other Local Guides
Our other sites
© Copyright 1999-2009 LRR Technologies (Hyderabad), Pvt Ltd. All rights reserved. fullhyd, fullhyderabad, Welcome To The Neighbourhood are trademarks of LRR Technologies (Hyderabad) Pvt Ltd. The textual, graphic, audio and audiovisual material in this site is protected by copyright law. You may not copy, distribute, or use this material except as necessary for your personal, non-commercial use. Any trademarks are the properties of their respective owners. More on Hyderabad, India. Jobs in Hyderabad.