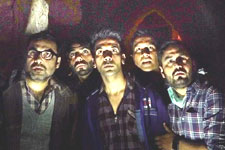 T J Reddy / fullhyd.com
EDITOR RATING
6.0
Performances
Script
Music/Soundtrack
Visuals
7.0
7.0
4.0
7.0
Suggestions
Can watch again
Yes
Good for kids
No
Good for dates
Yes
Wait for OTT
No
Every group of film lovers has a that one "smart" filmgoer. That one guy/girl whose sole reason for existence it is to point out that every single new release we common folk admire has at least one scene that was "stolen" from a film made in Korea or America or, in some cases, Norway. He/she is bound to either feel a sense of pride by displaying their know-how of the global cinematic landscape or dismay in pointing out the state of Indian cinema today.

We here are a conflicted bunch. We broadly agree that most art is derivative to a certain degree, but in the same breath tend to ask, "If you're going to 'steal', why not steal Indian? Do we not have a plethora of homemade cinematic classics? Or have we mined those few accessible classics so endlessly that looking to them for inspiration is akin to trying to pull water out of an empty borewell?"

In that vein, we can see the conundrum writers Raj and DK and director Amar Kaushik find themselves in. Attempting to make a self-referential horror comedy a la Cabin In The Woods is a noble cause, but they seem to have come to a realisation that the only half-decent horror films the wider Indian audience are familiar with involve jilted lovers looking to fulfil their romantic desires or stories that have a quirky bunch of idiots obliviously walking into an obviously haunted mansion or, God forbid, Naagin.

The makers of Stree take the first two tropes to heart and craft a story where a trio of lovable goofballs, Vicky (Rajkummar Rao), Bittu (Aparshakthi Khurrana) and Jana (Abhishek Banerjee), find themselves battling a supernatural jilted lover termed Stree with the aid of the town's modernized witch doctor Rudra (Pankaj Tripathi) and a mysterious out-of-towner played by Shraddha Kapoor.

To the movie's credit, it knows both its inherent limitations and the limitations of the genre in general. For example, it gives Shraddha Kapoor a character that gells with her limited acting range. It also refrains from trying to scare its audience simply because the filmmakers are smart enough to realise that neither their script nor their ghost lend themselves to fear. The film takes its seat next to its viewers and laughs with them way before they have a chance to laugh at it. Through shameless exposition dumps, cleverly-staged irreverent toilet humour and an adherence to meaningful commercial filmmaking, Stree acknowledges its blatant homages to Shaun Of The Dead and spins a message of female empowerment that is both timely and far removed from the slack-tivist, soundbite-filled, gobbledly-gook present day cinema feeds us.

There is a certain level of sensitivity required in your prose when addressing the inherent bias of a town which is supposed to be a microcosm of the world itself. A town that protects the son of a sex worker from knowing his origins also vehemently reviles a beautiful woman simply because she marries a man of her choosing. These small and shiny pieces of clever social commentary adorn a tapestry of easily consumable gender-swapped humour, self-referential line readings, meta jokes about the state of horror in Bollywood and mothers crying over their missing sons treasuring said son's briefs.

To the film's determent, all this intelligence comes to the fore only in the second half. The talented cast tries valiantly but fails to rise about the paint-by-numbers first half. Rao, Tripathi, Khurrana and Banerjee are all in fine form, but the sub-standard love story shared by Rao and Kapoor anchors the first hour to the bottom of the ocean's floor, and come hell or highwater, won't let the movie sail with the tides.

In an effort to make the first hour engaging, the film stuffs itself with a bombastic score, an item song and a romantic track. The gimmickry is obvious, and the results are less than pleasing. The movie's soul rises out of the mountains of deafening noise only in the second half, and inhabits the gorgeous and detailed sets built by the production designer. There is painstaking care put into everything from a match box to a pressure cooker brand, which adds to the authenticity of the small town. Even though the camera moves might not be from the top drawer, the look and feel of the film is uniquely its own.

For all its originality, Stree is crippled by the sins of its cinematic fathers. Without a plethora of horror cinema to draw inspiration from, Stree's writers have enough material to craft only one half of a truly entertaining horror comedy. What carries the film over the threshold of mediocrity is its message. The movie takes the bold stance that objectification is a fact of life but respect for the opposite sex should walk shoulder to shoulder with it. This is the base level of maturity most people look for from their cinema. The answer seemed to lie not with any goddess but with a witch.
Share. Save. Connect.
Tweet
STREE SNAPSHOT 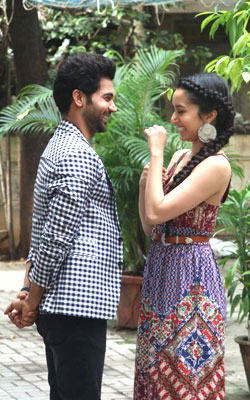 ADVERTISEMENT
This page was tagged for
Stree hindi movie
Stree reviews
release date
Rajkummar Rao, Shraddha Kapoor
theatres list
Follow @fullhyderabad
Follow fullhyd.com on
About Hyderabad
The Hyderabad Community
Improve fullhyd.com
More
Our Other Local Guides
Our other sites
© Copyright 1999-2009 LRR Technologies (Hyderabad), Pvt Ltd. All rights reserved. fullhyd, fullhyderabad, Welcome To The Neighbourhood are trademarks of LRR Technologies (Hyderabad) Pvt Ltd. The textual, graphic, audio and audiovisual material in this site is protected by copyright law. You may not copy, distribute, or use this material except as necessary for your personal, non-commercial use. Any trademarks are the properties of their respective owners. More on Hyderabad, India. Jobs in Hyderabad.