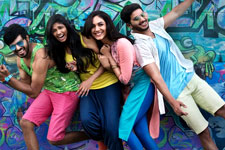 Neema Pramod / fullhyd.com
EDITOR RATING
6.5
Performances
Script
Music/Soundtrack
Visuals
7.5
6.5
6.5
5.5
Suggestions
Can watch again
Yes
Good for kids
Yes
Good for dates
Yes
Wait for OTT
No
There are three things that can happen when you go to watch a movie after watching its trailer. One - and this is the most common occurrence - is that the movie is exactly what the trailer promised. Nothing more, nothing less. Two, you realize that the trailer had included all the best parts of the movie, and the rest is a total drab. And then there is the third thing, which doesn't happen too often unfortunately - the movie proves to be much better than what the trailer promised. It is in this category that Kanulu Kanulanu Dhochaayante (dubbed from Tamil) falls.

The first half of the film does not deviate much from the contents of its trailer. You are introduced to the hero Siddharth (Dulquer Salmaan) and his best friend Kallis (Rakshan) as they wake up at noon and rush in a tearing hurry to attend a pool party. Yes, they are the cinematic representations of those urban youth whose lives are all about parties, booze and girls.

Soon enough, you discover that Siddharth has been "truly, madly and deeply in love" with Meera (Ritu Varma) - a beautician who he has been stalking for a while. One fine day he proposes to her in classic Gautham Menon fashion (the filmmaker plays a role in the film, too - more on that later), and she immediately accepts. Kallis, too, by default, falls for the heroine's best friend Shreya (Niranjani Ahathian). So far, so cliché.

Until suddenly, it is not. And that is when Kanulu Kanulanu Dhochaayante begins to soar.

It is impressive how Desingh Periyasamy takes every rom-com cliché in the textbook and uses them to subvert your expectations by calling them out for what they really are. A major twist around the interval makes you look back at everything you saw until then, and you realize why things had to be done the way they were.

Post-interval is when Kanulu Kanulanu Dhochaayante really comes into its own. What was a rom-com transforms into a heist film, and the writing in these portions keeps you hooked. It is nice to see two movies in the same week - HIT and this one - respect the intelligence of the audiences. Kanulu Kanulanu Dhochaayante deals with technology-inspired crime, but the technical portions are neither over-simplified nor over-complicated. It is both interesting and unnerving to see how our increased dependence on technology has made us and our lives naked to the world.

The writing is wonderful in terms of plot - after a point you cannot really guess which direction is the movie going to take - but we do wish that the same focus had been extended to developing the characters, too. Surprisingly, this time it is the men who get the shorter end of the stick. The motivations of Meera and Shreya are understandable and even relatable to an extent - especially if you are a woman yourself. But you are not really allowed to get into the heads of Siddharth and Kallis - especially that of the former.

Kallis at least gets one scene where we learn why he is so attached to Siddharth, but you barely get to know enough about Siddharth except for something about divorced parents. Siddharth and Kallis come across more as stereotypes of urban youth than actual flesh-and-blood people. Yes, not knowing much about these people helps in amping up the surprise quotient. But at the end of the day, you do need something to form an emotional connect with the characters to want to root for them.

But that is where the presence of someone like Dulquer Salmaan comes in handy. The man's effortless charm makes it incredibly easy to warm to his character. The fact that he dubbed for himself in Telugu is a huge plus, despite the slight Malayalam twang. Rakshan, however, can be a little too loud and grating at times, but his comedy works more often than not.

It is a pleasure to see Ritu Varma of Pelli Choopulu fame back on screen in a strong role, and she more than delivers, making you wonder why you don't see more of her. Her styling is awesome, too, making her look ethereal. Niranjani Ahathian is also apt in her role.

However, it is a sportive Gautham Menon who walks away with the film. He essentially plays a cop straight out of his own films like Gharshana, but with an unexpected (and extremely amusing) twist which we will leave you to find out for yourselves. Watch out for that rip-roaring nods to Ye Maya Chesave and Surya S/o Krishnan, which had the theater in splits.

Visually, the movie is a pretty picture, but there is nothing in the staging or the cinematography that makes you go wow. Masala Coffee's peppy songs and score amplify the mood of the film. We must also mention here that even after three years of delay, the film still feels fresh and new.

Overall, Kanulu Kanulanu Dhochaayante is 162 minutes of pure fun, with lots of humour, some romance and also some fodder to keep your brain engaged - you just need to wait out the cliché-ridden first half. 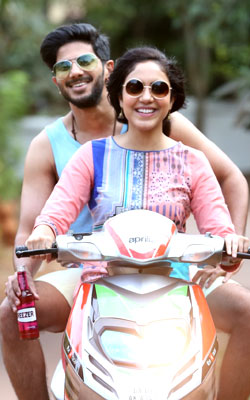 ADVERTISEMENT
This page was tagged for
kaanulu kan
Kanulu Kanulanu Dhochaayante telugu movie
Kanulu Kanulanu Dhochaayante reviews
release date
Dulquer Salmaan, Ritu Varma
Follow @fullhyderabad
Follow fullhyd.com on
About Hyderabad
The Hyderabad Community
Improve fullhyd.com
More
Our Other Local Guides
Our other sites
© Copyright 1999-2009 LRR Technologies (Hyderabad), Pvt Ltd. All rights reserved. fullhyd, fullhyderabad, Welcome To The Neighbourhood are trademarks of LRR Technologies (Hyderabad) Pvt Ltd. The textual, graphic, audio and audiovisual material in this site is protected by copyright law. You may not copy, distribute, or use this material except as necessary for your personal, non-commercial use. Any trademarks are the properties of their respective owners. More on Hyderabad, India. Jobs in Hyderabad.