Guardians Of The Galaxy (3D) Review 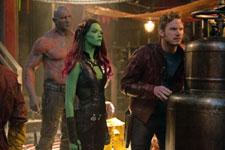 Kritika Deval / fullhyd.com
EDITOR RATING
8.0
Performances
Script
Music/Soundtrack
Visuals
7.0
8.0
7.0
8.5
Suggestions
Can watch again
Yes
Good for kids
Yes
Good for dates
Yes
Wait for OTT
No
It was hard, very hard, but we managed to control our laughter from scene to scene to make sure we could give our dear readers the objective review that you deserve for Guardians Of The Galaxy. So, here it goes.

Squeeeeeeeee! This movie was so awesome! All the aliens looked so amazing and there were all these '70s songs that made us want to sing along and...

OMG! We absolutely could not stop laughing! Rocket Raccoon is soooooooo cute when he pulls out his enormous guns, and there's this tree person that keeps going "I AM GROOT" and when Chris Pratt says metaphors go over Batista's head Batista goes like, "Nothing goes over my head, my reflexes are too fast" and then we can't hear anything 'coz everybody is laughing just way too hard.

Okay, you guessed it. That wasn't quite it either.

Now, seriously, Guardians Of The Galaxy has two things in common with The Lego Movie - Chris Pratt, and the fact that they are easily the two most subversively hilarious films of the year. The establishing flick to a series set in the Marvel universe, GOTG tells the tale of four of the unlikeliest heroes imaginable whose responsibility it is now to save the whole galaxy they currently inhabit.

Peter Quill (Chris Pratt) is a Terran (aka Earth dweller) who was abducted by space pirates called The Ravagers during his childhood, and was brought up to be a part of them. Gamora (Zoe Saldana) is an assassin belonging to the Kree race who no longer supports its ideology. Rocket (Bradley Cooper) is a raccoon who has been genetically tinkered with, and his buddy Groot (Vin Diesel), an ancient sentient tree creature which doesn't say much but which has all kinds of tricks up its sleeves (literally). Drax the Destroyer (Dave Bautista) is out to seek revenge for the death of his family, and, as we mentioned above, does not get metaphors.

These four unlikely creatures are brought together by entirely tangential motivations but are eventually united by the sole aim of keeping an immensely powerful object called The Infinity Stone out of the hands of Ronan (Lee Pace), the fanatical leader of the Kree race who wants to destroy every other species.

There never really is a moment of reckoning where all four magically decide to give up on all of their agendas so they can single-mindedly pursue the goal of saving the galaxy. Rather, the whole thing just sort of comes together even as our heroes strive to go off in entirely opposite directions. They bicker the whole while, actively try to sabotage the "mission", and sometimes nearly do it unintentionally. However, they make for such an organic team that you can't help but accept that this is what they are meant to do, together.

From start to end, GOTG is tightly packed with all kinds of asides, with the story taking you from one imaginative place to another, and from one enchanting adventure to another. Although the plot does have a tendency to meander, and confuse if you're not paying attention, it doesn't matter because you're being thoroughly entertained all through.

The casting is pure genius, with each actor matching their character by virtue of the people they are, rather than actually acting. Chris Pratt's deadpan immaturity neatly complements Zoe Saldana's femme fatale act. Bradley Cooper infuses the character of Rocket Raccoon with an infectiously raucous enthusiasm. We couldn't really figure out what Vin Diesel does with Groot, but we do know that the next time we plant something, it will be called Groot. Bautista is basically just Bautista with a different name and lots of make-up. You don't really come across the rest of the cast very often, but whenever you do, they shine.

The music and the visuals, both of which are stunning, seem to have started at one point and then grown together to a natural conclusion. The screenplay utilizes both of these excellently executed elements to great effect, putting in little Easter eggs for you to discover and delight in all along the way.

Guardians Of The Galaxy is that rare action movie that mixes reckless fun with an equally reckless penchant for blowing things up, and can even drag a tear or two out of you if you let your defenses down enough. Whether you are a fan of the series (which tends to be a rare occurrence), or someone who's just along for the ride, you will walk out of the theatre hoping for more.
Share. Save. Connect.
Tweet
GUARDIANS OF THE GALAXY... SNAPSHOT
GUARDIANS OF THE GALAXY (3D) SNAPSHOT 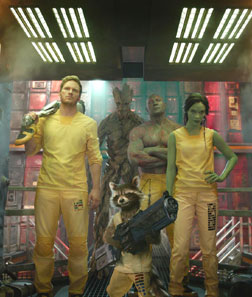 ADVERTISEMENT
This page was tagged for
Guardians Of The Galaxy (3D) english movie
Guardians Of The Galaxy (3D) reviews
release date
Chris Pratt, Zoe Saldana
theatres list
Follow @fullhyderabad
Follow fullhyd.com on
About Hyderabad
The Hyderabad Community
Improve fullhyd.com
More
Our Other Local Guides
Our other sites
© Copyright 1999-2009 LRR Technologies (Hyderabad), Pvt Ltd. All rights reserved. fullhyd, fullhyderabad, Welcome To The Neighbourhood are trademarks of LRR Technologies (Hyderabad) Pvt Ltd. The textual, graphic, audio and audiovisual material in this site is protected by copyright law. You may not copy, distribute, or use this material except as necessary for your personal, non-commercial use. Any trademarks are the properties of their respective owners. More on Hyderabad, India. Jobs in Hyderabad.