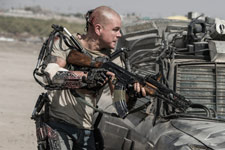 Swayamsrestha Kar / fullhyd.com
EDITOR RATING
6.5
Performances
Script
Music/Soundtrack
Visuals
6.5
7.0
6.0
7.0
Suggestions
Can watch again
Yes
Good for kids
No
Good for dates
Yes
Wait to rent it
Yes
Even when humans achieve the ability to be invincible, there are going to be people who want all of it to themselves. Even when we are poised on the brink of immortality, we'd rather shun the company of those we deem inferior while we embrace the enticing possibility of eternal life. Even when we have everything, we'd rather share nothing.

This is the premise that Elysium seeks to tackle. This is the horrifying truth (shake your heads in disagreement, o champions of human kindness, but you cannot deny the fact that people stood aside and watched African Americans being lynched by mobs) that the film seeks to unveil. It's an issue that delves into the messy corners of human psyche, and we're well off disavowing it. But this is what the director, Neill Blomkamp, chose to grapple with (albeit loosely) in his earlier venture, the Oscar-nominated District 9, and this is what he handles in his latest vision of a dystopian future.

It is the year 2154. The environmentalists' predictions have come true, and the planet is too overpopulated and polluted to hold all its inhabitants. The wealthiest of humans have escaped this ravaged world, and now sneer at the rest from behind their temperature-controlled, powered-by-advanced technology settlement in space - Elysium. The dregs of mankind - the poor, mostly - are left behind to survive in squalor, governed by robots, and denied crucial medical attention that they so desperately need.

The people of Elysium are equipped with Medbays - tanning-bed-like devices which can cure any disease known to man. And they guard them zealously and jealously. There's no perceptible danger, if you don't count their fellow humans on Earth who have medical conditions that are more serious than sagging skin or a curly mop of hair.

The defence system of Elysium is led by an icy blonde and icily pre-disposed Madame Delacourt (Jodie Foster). Max D'Costa (Matt Damon) is a convict-on-parole back on Earth. He's a worker at the robot building factory.

Ironically, the robots that the humans build are then assigned to act as law-enforcers on their creators. It's an unbearably bleak world, and Blomkamp portrays it with a relentless intensity.

After a freak accident which exposes him to a whole lot of radiation, Max is told that he has five more days to live. A childhood dream of going to Elysium one day becomes a desperate necessity, and Max approaches Spider (Wagner Moura), the guy who has been trying to by-pass Elysium's defence machinery and get people to the Medbays for years.

Spider fits Max with an exoskeleton that's wired to the latter's nervous system, thus giving him the strength that dwindles rapidly due to the radiation.

Max's childhood sweetheart Frey (Alice Braga) has a leukemic daughter whom she needs to get to the Medbays. Then, there's the mercenary Krueger (Sharlto Copley) who's employed by Delacourt to hunt Max down.

Neill Blomkamp's a genius. No seriously, he is. He blends the CGI grandeur of Hollywood sci-fi with the earthy entrenchment of the hand-held camera. Elysium might be the shinier-ly packaged cousin of District 9, but at heart, it has the same raw nerve; at the core of the premise lies a desire to provoke, to confront, and to sensitize us to atrocities that we comfortably ignore on a daily basis.

While we cannot help but be affected by the starkness and the novel conceptualisation of Blomkamp's vision, we also cannot help but notice that in Elysium, he seems to have pandered to the overwhelming Hollywood-esque need to churn out action blockbusters. Somewhere along the line, the screenplay seems to lose that edge, that relentless desperation that seems to be driving it in the beginning.

Matt Damon puts in a half-baked performance as Max. The emotional oscillations that the character goes through, the mental turmoil that must obviously be seizing a man who has been told that he'll die in five days; all of these layers never come to fruition through Damon's tired face and furrowed eye-brows.

Jodie Foster is adequately cold, shrewd and villainous, though we were a little thrown off by the accent. Sharlto Copey, on the other hand, is deliciously malevolent as Krueger. His rugged hulking body language, his gleefully Russian diction and his menacing mercilessness are such a departure from his earlier turn as a bureaucrat-turned-alien in District 9.

The cinematography is impeccable. Blomkamp's technique, at least, remains unsullied from mainstream ambitions. The editing though could have been tighter, as the script, and the mortal-deadline-driven quest of the protagonist required a tauter screenplay.

Elysium will probably not have a lot of takers, seeing as to how the main issue here is our own faults as a people, and the fact that Blomkamp has steadily refused to ease up in the execution of his perspective. But then again, we never did like looking into a mirror, did we?
Share. Save. Connect.
Tweet
ELYSIUM SNAPSHOT 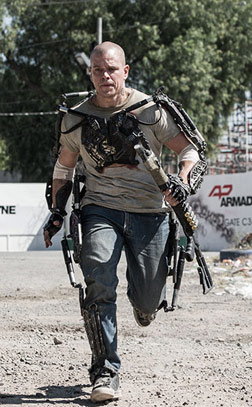 ADVERTISEMENT
This page was tagged for
Elysium english movie
Elysium reviews
release date
Matt Damon, Jodie Foster
theatres list
Follow @fullhyderabad
Follow fullhyd.com on
About Hyderabad
The Hyderabad Community
Improve fullhyd.com
More
Our Other Local Guides
Our other sites
© Copyright 1999-2009 LRR Technologies (Hyderabad), Pvt Ltd. All rights reserved. fullhyd, fullhyderabad, Welcome To The Neighbourhood are trademarks of LRR Technologies (Hyderabad) Pvt Ltd. The textual, graphic, audio and audiovisual material in this site is protected by copyright law. You may not copy, distribute, or use this material except as necessary for your personal, non-commercial use. Any trademarks are the properties of their respective owners. More on Hyderabad, India. Jobs in Hyderabad.