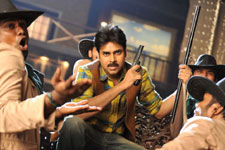 Deepa Garimella / fullhyd.com
EDITOR RATING
5.5
Performances
Script
Music/Soundtrack
Visuals
8.0
4.0
6.5
7.0
Suggestions
Can watch again
No
Good for kids
No
Good for dates
No
Wait for OTT
Yes
Today, there is a thin line between Puri and Posani. Puri is perhaps a couple of films away from crossing it.

For one, the only reason some of his recent movies keep you on the edge of your seat is that you're unsure of which expletive/"personal insult passing off as hard-hitting dialogue" lies around which corner. And if you're a woman, well, you're not even invited to the party.

Cameraman Ganga Tho Rambabu, a supposed civil outrage package a la Arvind Kejriwal meets Rang De Basanti meets just about every other Telugu movie, suffers from related flaws, even if it doesn't have anything explicitly offensive.

The fast-paced title montage of grainy footage from AP's television news channels plays out with a frantic background score, setting the stage for what you think will be a powerful, nuanced look at what goes on behind the scenes. Pawan Kalyan's entry is suitably sleek, and equally awesome is his first scene as hero - Rambabu (the journalist he plays) starts out by making peace between two warring castes of hostellers who have been instigated into fighting by a scheming politician.

What plays out is a pretty ordinary story of evil politician vs the general public. Rambabu, a mechanic-turned-journo, is the kind who (surprise, surprise) cannot stand injustice. He asks powerful politicians gutsy questions, humiliates them on screen, and beats them up if required.

There's nothing new, upredictable or even subtle about CGTR. There aren't many great lines either. The netas are either black or white. Jawahar Naidu (Kota Srinivasa Rao) and his son Rana Babu (Prakash Raj) are wicked and power-hungry in the way that every Telugu film villain has been.

A lot of emotional speeches are made, but there's neither anything issue-based about Rambabu's agitation against the wrong-doers, nor any specific agenda. In the end, things become so unrealistic that it's not even funny. It is preposterous, for instance, to assume that a crowd of lakhs of agitated people (assembling OVERNIGHT) on the streets is capable of conducting itself in more organized a manner than a school assembly. This is wishful thinking - the kind of arbitrary crusading you expect from a B-grade movie, and not from what you assume is a team of responsible entertainers who have been around for a long time.

And Puri Jagannadh stops short of calling his characters by their real names - the benevolent CM (Nasseer) is called Chandrasekhara Reddy, and the failed and frustrated opposition leader is called Jawahar Naidu (who, however, is dressed like Karunanidhi).

Flashes of brilliance do exist, the most visible being the scene in which Rambabu rebukes a newsreader (Brahmanandam) for overly colouring facts. It's a brave, brave scene, given that Pawan Kalyan is laughing at himself (so is Prakash Raj, but he isn't in the scene); and it is well-written. Then, there is this scene in which Rambabu (actually Pawan Kalyan - who are we fooling here?) chides the general public for its readiness to watch its favourite star's movie at unearthly hours (FYI, there was a fans' show of CGTR screened at 5am in the city, like most big releases nowadays) and its total apathy at social problems.

The other kind of scene that Puri films are good at drawing applause for is one in which the hero gives the heroine a long speech "putting her in her place" for no apparent fault of hers. CGTR has one like this as well, that would have branded Puri a misogynist but for the fact that he ended the speech with a dialogue glorifying the charm of an "ordinary woman".

Pawan Kalyan's star power is helping a lot, but he looks bored. Tamannah is as spirited as ever, but her characterization is shrill and annoying, so much that she actually brings down the watchability of the movie by a notch. The second female lead is supposedly hot, but only leaves everyone wondering why she was even brought in. Prakash Raj, Kota and Tanikella are a superb bunch made to do what they've always done in a traditional Telugu film.

Mani Sharma's socio-political tunes are pretty rousing, but his other songs lack charm. The visuals are all right.

Watching CGTR is as useful as watching the news. It is high on emotion and politically-laden, but has little to say. Luckily, for the fans, Pawan Kalyan plays both the newsreader and the commercial break.
Share. Save. Connect.
Tweet
CAMERAMAN GANGA THO RAMBABU SNAPSHOT 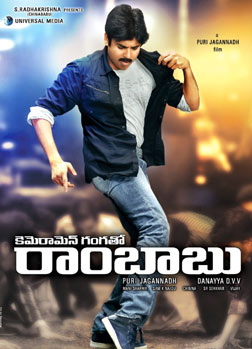 Any way thankyou ..!
SANJAY DESHMUKH - 9966723698 on 25th Oct 2012, 7:15pm | Permalink
Its a Nice Movie... Ppl Must Realise who ever are fighiting with each other for pieces of state..... For them it has been made excellent movie....
alaganikumar on 27th Oct 2012, 8:40am | Permalink
wen seema andhra was separated from madras . y u did nt think like this only . as u hv commented
SANJAY DESHMUKH on 19th Nov 2012, 10:53pm | Permalink
I hope we were not born in those years.. (when andhra was separated....)
SANJAY DESHMUKH on 19th Nov 2012, 10:50pm | Permalink
Ya I Do Agree.... But It Is Necessity @ dat time. I Prefer not now mistakes can be correct now onwards & i believe dat Unity is Strength.
prince#fans club on 23rd Oct 2012, 10:19pm | Permalink
movie is good, second heroin is boaring, puri dilogues from pawan voice sounds gud.. Overall movie is satisfactory.
RK on 23rd Oct 2012, 9:34am | Permalink
5.5 overall rating is poor. Don't understand how 5.5 rating came if you calc AVG of all the performances, script, music, visuals. It should be 6.3 or above atleast. Promoting the movie negatively...you can't do this for this type of msg movies...sad you to be an Indian :(
Yuvakumar on 22nd Oct 2012, 6:06pm | Permalink
first half passable and second half good.
Mice message oriented movie.
Saradhi on 22nd Oct 2012, 12:39pm | Permalink
A very good movie. Cut the scence of heroine which are really absurd. All the political sequences involving Prakash Raj, Kota and Pawan are superb. The dialogue sequence at the Khairatabad Police station is outstanding. Excellent satire on telangana separatists. Questioned the purpose of separation in extremely logical and convincing way which might have irked the people. A critic must be accepted. Cutting off these scence from the film is criminal. It is a film with message. Don't miss the film and watch it with complete footage.
jay on 22nd Oct 2012, 4:52am | Permalink
This is one of the best political movie in recent times.Inspiring and haunting.
I do belong to Telangana region, but do not see any comparision between movie scences and real fight for telangana.One thing is sure that these so called separtists are creating unnecessary problems just to hilight themselves. There are many people like me oppose bifurcation but if we talk you expect same reception as Rambabu got.
gadam AVINASH on 21st Oct 2012, 7:29am | Permalink
Good meassage movie
V. L. Seethamsetty on 20th Oct 2012, 1:05pm | Permalink
I fully agree with deepa garimella. The only positive thing about the movie is some message has been given and i am praying God atleast one person will change for good after seeing the movie
anonymous critic on 19th Oct 2012, 10:07pm | Permalink
Another excellent reivew. Movie is not as horrible as I was expecting from the grossly overrated director. Here he tried to intelligently leverage contemporary issues without making it too obvious, but as news reports suggest it has irked some sections. Some dialogs may sound funny, but it is hard to ignore his disdain towards women. Rambabu's Ganga was not maili, but she was quite annoying. The producers may be hoping this will be a windfall, but hope this doesnt result in the fall of the wind (Pawan)!
RATING
4
RK on 23rd Oct 2012, 9:30am | Permalink
poor review...wasting ur time for promoting negative review...Already it broke several records & will break his own records for GS...
Srikanth Signature on 21st Oct 2012, 4:34pm | Permalink
"but hope this doesnt result in the fall of the wind (Pawan)!," - no way sir!.
vinay on 19th Oct 2012, 8:43pm | Permalink
awsum mvie
prakash on 19th Oct 2012, 5:47pm | Permalink
super cinema
Choni on 19th Oct 2012, 11:21am | Permalink
Hmm a genuine attempt from both the director and the actor to resembles what exactly is happening in AP....one of the best scenes where hero questions the politician about "Jana Gana Mana" ...was awesome...
babu on 19th Oct 2012, 10:18am | Permalink
ok
Common man on 19th Oct 2012, 1:15am | Permalink
Excellent movie as per current hot situations on localism and divisioning of India. RAMBABU - Anger of a common man. All political parties dumb on these isssues except the daring Powerstar. Except some scenes ,movie is excellent.
1 - 15 OF 21 COMMENTS  |  NEXT  |  LAST
LEAVE A COMMENT
fullhyd.com has 700,000+ monthly visits. Tell Hyderabad what you feel about Cameraman Ganga Tho Rambabu!
MORE MOVIES
Latest Reviews
Sita Ramam
DC League Of Super-Pets
Bimbisara
Bullet Train
Ramarao On Duty
more
The Legend
Shamshera
Thank You (Telugu)
Gargi
My Dear Bootham
Shabaash Mithu
HIT: The First Case
The Warriorr
Happy Birthday (Telugu)
Kaduva
Contemporary Reviews
Student Of The Year
Delhi Safari (3D)
Premium Rush
Argo
Denikaina Ready
more
Chakravyuh
Paranormal Activity 4
Taken 2
Makkhi
Aiyyaa
Brothers
Bhoot Returns
Bhoot Returns (3D)
Resident Evil: Retribution (...
Random Reviews
East Phir Bhi Hai East
Shrek
Devdas (Telugu)
S W A T
Andagaadu
more
Pride And Prejudice
Hawas
The Golden Compass (Telugu)
X-Men Wolverine (Telugu)
Super Model
Into The Storm
Courier Boy Kalyan
Ghost In The Shell
Ko Ko Kokila
HIT
SEARCH MOVIES
Dissatisfied with the results? Report a problem or error, or add a listing.
ADVERTISEMENT
SHOUTBOX!
{{todo.name}}
{{todo.date}}
[
ip{{todo.ip}}
]
{{ todo.summary }}... expand »
{{ todo.text }} « collapse
First  |  Prev  |   1   2  3  {{current_page-1}}  {{current_page}}  {{current_page+1}}  {{last_page-2}}  {{last_page-1}}  {{last_page}}   |  Next  |  Last
{{todos[0].name}}

ADVERTISEMENT
This page was tagged for
CAMERAMANGANGATHORAMBABU MOVIE REVIEW
Cameraman Ganga Tho Rambabu telugu movie
Cameraman Ganga Tho Rambabu reviews
release date
Pawan Kalyan, Tamannah
Follow @fullhyderabad
Follow fullhyd.com on
About Hyderabad
The Hyderabad Community
Improve fullhyd.com
More
Our Other Local Guides
Our other sites
© Copyright 1999-2009 LRR Technologies (Hyderabad), Pvt Ltd. All rights reserved. fullhyd, fullhyderabad, Welcome To The Neighbourhood are trademarks of LRR Technologies (Hyderabad) Pvt Ltd. The textual, graphic, audio and audiovisual material in this site is protected by copyright law. You may not copy, distribute, or use this material except as necessary for your personal, non-commercial use. Any trademarks are the properties of their respective owners. More on Hyderabad, India. Jobs in Hyderabad.