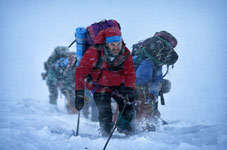 Here's the twist. Kormakur has infused all of these elements with the stolid spirit of a creation akin to a documentary, all in the name of verisimilitude. This will most likely polarize the viewers of Everest; some will find Kormakur's approach refreshing while others might feel disappointed with the toned down treatment of a big story. Complicating matters further, the trailer of Everest is rather misleading. The film has been marketed like any disaster movie, but it's a different beast altogether.

For those who are unfamiliar with Jon Krakauer's book Into Thin Air, or the TV movie adaptation of the book, Everest is inspired by the true story of the tragic trek to the mountain in 1996 that went horribly wrong. Rob Hall (Jason Clarke) runs Adventure Consultants, an expedition-guiding company whose business it is to take its clients to the top of Mount Everest. Rob is assisted by Helen (Emily Watson), his base camp coordinator, and good friend Guy (Sam Worthington) who is also a guide.

In April 1996, an interesting array of people signed up with Rob and Co. for the grueling trek. Beck (Josh Brolin) is a yee-haw Texan, struggling to mask depression with his loud charm. Doug (John Hawkes) is a mailman who has attempted the trek earlier but failed, while Yasuko, a Japanese woman, has already scaled six of the seven tallest peaks in the world, and has saved the best for last. Jake Gyllenhaal plays Scott, a rival guide who harbours a grudging respect for Rob. Adding a little tension to the mix is Jon Krakauer (Michael Kelly), a journalist from Outside magazine who will write a piece after the trek is over that could potentially bump up business for Adventure Consultants.

The scriptwriters give us just tantalizing glimpses of these interesting characters, but refrain from a psychological exploration of them or their relationships with each other. Under these constraints, the ensemble has done laudatory work. Clarke draws you in with his decent, dependable likeability, while Watson's performance balances the emotional quotient in the second half of the film, which also sees stellar work by Keira Knightley and Robin Wright, the wives of Rob and Beck respectively, who portray how these women suffer in their own terrible way at home.

However, you don't feel deeply invested in any one particular character, which is a definite drawback but also inevitable since there are too many characters jostling for space on that snowy peak, and simply because the mountain is the protagonist. Everest is magisterially indifferent, and it looms over the characters and events in the film throughout.

Salvatore Totino's camera work is a real treat, and it blends seamlessly with Dadi Einarrson's visual effects. The USP of this film is that it gives the closest experience of Everest that the average movie-goer can hope for - there are moments in the film when you can almost taste the snow, or reel at its vertiginous heights. However, there aren't indulgent sweeps of otherworldly vistas, or sensational CGI geared towards cheap thrills. The focus is on the real beauty of Everest, and that is intelligent filmmaking simply because that reality is so far removed from our experience anyway.

The last one hour of Everest, which details the tragic loss of lives, is quite harrowing. The expedition heads north, but circumstances go south, suddenly and dramatically. A freak storm hits the group, and they start dropping like flies. Death comes quickly to some, and very slowly to others. The CGI here is brilliant; the elemental malevolence of the storm is glorious. Special mention must also be made of the amazing sound design, which adds another layer to the oppressiveness of the experience.

However, there are no heroes in that storm - there are only human beings making crucial errors of judgement. The film's refusal to resort to braggadocio is almost monk-like. There is no heroic bouncing around and no grinning while hanging on by a thumb from a ridge. Kormakur keeps the attention on what would have actually transpired - people putting one frostbitten foot in front of the other, and trying not to die due to lack of oxygen.

However, lack of heroism is one thing, but lack of meaning is another. There is a crucial scene in the beginning when Rob is briefing the group on possible problems, and throwing words like cerebral and pulmonary edema around. Krakauer asks the group why they want to scale Everest despite it being so perilous, and they jokingly resort to the famous "Because it's there" quip. Seriously? That scene, and a nagging feeling, stay with you.

That nagging feeling rears its head again at the end of the movie when you see awful suffering in pretty graphic detail. Why did these people put themselves in such serious danger? What was the point of it all? For those of us who can view life through the lens of a Camus-like existentialism, perhaps it's easy to shrug our shoulders and say "shit happens" and take Everest's startling lack of overarching thematic meaning in our stride. However, for those of us who enjoy cinema as an exploration of the human experience, and enjoy watching stories about the triumph of the human spirit, Everest is an underwhelming work when viewed in totality. It's safe to say that viewers and critics will most likely be divided on Kormakur's treatment of this topic.

So, catch the movie this weekend and join the debate.
Share. Save. Connect.
Tweet
EVEREST (3D) SNAPSHOT 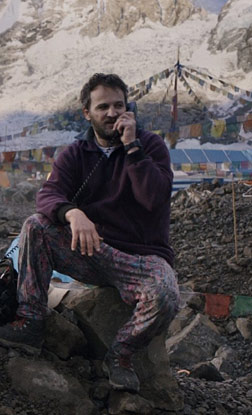 Pitching in for the debate - the true answer for 'Why?' is in fact 'Because it's there'. There'll always be the handful of people wanting to attempt something solely because the possibility exists. And as the rest of us watch, they go into murky waters. Most suffer but sometimes they discover new things hitherto unknown to humanity.

It could come in any form, this reason. Like trying to mask depression as for Beck. Or wanting to inspire children as for Doug. For some though, it isn't easy to rationalise or even articulate, like for Yasuka. She has to climb it because it's the only thing left to do after climbing the rest of the big seven.

ADVERTISEMENT
This page was tagged for
Everest (3D) english movie
Everest (3D) reviews
release date
Jason Clarke, Josh Brolin
theatres list
Follow @fullhyderabad
Follow fullhyd.com on
About Hyderabad
The Hyderabad Community
Improve fullhyd.com
More
Our Other Local Guides
Our other sites
© Copyright 1999-2009 LRR Technologies (Hyderabad), Pvt Ltd. All rights reserved. fullhyd, fullhyderabad, Welcome To The Neighbourhood are trademarks of LRR Technologies (Hyderabad) Pvt Ltd. The textual, graphic, audio and audiovisual material in this site is protected by copyright law. You may not copy, distribute, or use this material except as necessary for your personal, non-commercial use. Any trademarks are the properties of their respective owners. More on Hyderabad, India. Jobs in Hyderabad.