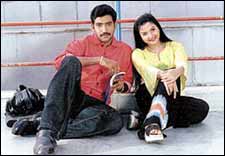 Here's Tarak as a single act, scripted play. First, we let the characters introduce themselves:

Taraka Ram (Tarakaratna): I may look like just another scrawny teen, but actually I'm just scrawny! I'm also a model student showing everyone how to become a hero - shun ragging, distribute business cards of adoption homes and, more importantly, mention bloodline i. e. grandfather & uncle, as many times as possible!

Varsha (Sharmili): I'm the one you'd see Tarak dancing with in all the numbers. I love him and chocolates, both of which are more than obvious. But I'm sure the staff at fullhyd will not do any fat jokes on a newcomer. Fat chance! 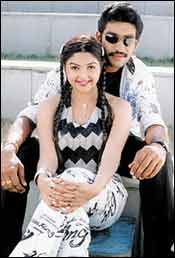 Jaganmohan Rao (Krishna): - I'm the editor of Punya Bhoomi daily, looking for a journalist who will lead the rowdy youth of today into some productive purpose i. e. buying our newspaper! That journalist should also be able to write inspiring columns, but that's not as important. By the way, I'm Varsha's dad, and that's my contribution to the yucky twist in the flick.

Evil Lecturer (Babji): I'm half-lecturer, half-lecher and a complete jerk! I'm waiting to get back

at Tarak who insulted me in front of that girl I was trying to force myself onto.

Main Baddie: I'm the editor of a competing newspaper who will stop at nothing to increase my sales. Better even, decrease the others' sales.

Tarak's sister: I'm the last meaningful character in this cast of 900 people. I'm brainy enough to get a medical seat but not to have passed inter. Or so I thought...

Tarak: My ultimate ambition in life is to become a journalist. That's why I did my B. Tech.!

Jaganmohan: Great! I was looking for a single-track minded person like you to

guide the confused youth, through my paper. You're hired!

Tarak: But I need to mingle with the youth to know their real problems. So I'll join college again, stay undercover and write under the pseudonym 'Tarak'. But wait, that's my real name itself! I'll just call myself Ram from now! Clever? Maybe. Brilliant? Possibly. Stupid? Definitely!

Jaganmohan: Whatever, as long as you keep my circulation going...

Main Baddie: The sales of that wretched newspaper have gone up, thanks to that Tarak. I have to buy him or at least fry him. Goons, thugs and fellow men, find him and grind him!

Tarak: Varsha, don't you think we would remind people of Laurel & Hardy? 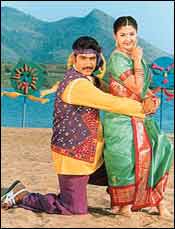 Jaganmohan: I'm planning to get Varsha hitched to a rich guy.

Tarak: Does he know the number of times her refrigerator bulb goes on and off in half-an-hour?

Tarak: All right. I'll just have to make Varsha hate me then.

Tarak to a friend: I never really loved

Varsha (to herself, in the background): Damn! All those steps in the sunny afternoons, wasted.

Varsha (aloud): I hate you, Tarak!

(In the general assembly of the college)

Evil Lecturer: I told you all that this Tarak is a shady guy. He's already completed his B. Tech. Why has he again come back if not to feed on young virgin flesh?

Tarak: Stop it, already! I am the columnist, the man, the Tarak you all love so much. My sister killed herself thinking that she flunked when she had actually got a distinction in inter. My parents couldn't survive the shock. And all this was because of a newspaper misprint. That's when I decided to counsel juveniles through a newspaper. You all know the saying: Pen is mightier than sword!

Evil Lecturer & Baddie: You have opened our eyes! Forgive us!

Varsha: Before my last dialogue, I want to thank the director for giving me such a 'meaty' role. Daddy, Tarak left me because of you. Please give a full page in the matrimonials of your paper.

Tarak (reading the paper): Wow! Goodbye poverty! I'm gonna be the owner of the highest circulated daily of our state.

ADVERTISEMENT
This page was tagged for
tarak telugu full movie heroine photos
tarak telugu movie
Tarak telugu movie
Tarak reviews
release date
Follow @fullhyderabad
Follow fullhyd.com on
About Hyderabad
The Hyderabad Community
Improve fullhyd.com
More
Our Other Local Guides
Our other sites
© Copyright 1999-2009 LRR Technologies (Hyderabad), Pvt Ltd. All rights reserved. fullhyd, fullhyderabad, Welcome To The Neighbourhood are trademarks of LRR Technologies (Hyderabad) Pvt Ltd. The textual, graphic, audio and audiovisual material in this site is protected by copyright law. You may not copy, distribute, or use this material except as necessary for your personal, non-commercial use. Any trademarks are the properties of their respective owners. More on Hyderabad, India. Jobs in Hyderabad.