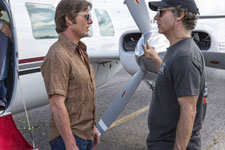 T J Reddy / fullhyd.com
EDITOR RATING
7.0
Performances
Script
Music/Soundtrack
Visuals
9.0
7.0
5.0
9.0
Suggestions
Can watch again
Yes
Good for kids
No
Good for dates
Yes
Wait to rent it
No
There is a trend emerging in the world of cinema. While Bollywood continues to be enamoured with Dawood Ibrahim, his cohorts, his sister and his rivals, Hollywood is busy milking the life and times of Pablo Escobar and his drug cartel for their movies and Netfilx shows. Following the herd, director Doug Liman, the man behind Edge Of Tomorrow, The Bourne Identity and Swingers, picks up the true life story of Cuban cigar smuggler turned CIA enlisted mole turned drug mule turned money launderer turned CIA secret operative Barry Seal as the basis of his latest project.

The ageless wonder Tom Cruise essays the role of Barry Seal as we follow his life and times from 1978 to 1986. The last line from the previous paragraph works as an adequate description of the plot of a film which takes Seal and the audience on a wild ride which seems too crazy to be true and is peppered along the way with humour, more information than you'd want to know about flight mechanics and Cruise's enduring charm and smile.

American Made is a movie somehow boosted and hindered by Cruise's presence and the Seal's story. The film, while being set smack-bang in the middle of the most tumultuous time in US history and being fuelled by stupidly high amounts of cocaine, neither becomes a brash, uncompromising look into a world of men with lax morals like The Wolf Of Wall Street was, nor falls into the category of paint-by-numbers biopics where filmmakers attempt to justify a man's decent into a shady world with unconvincing motives. American Made stays in the cushy position between the two extremes snuggled up next to The Big Short.

Coming in at a conservative runtime of 117 minutes and using '80s-era non-widescreen filming and projection techniques, the film separates itself from its contemporaries with its look, feel and colour palette. The frames seem slightly grainy, the colours are a wee bit saturated and the exposition dumps come as droves of unintelligible jargon to aid the movie in keeping its runtime low. While the movie uses crude animation to make these big piles of expositing seem palatable, the story being told and the details it needs to cover necessitate that the film use conventional story-telling techniques from time to time, and that leaves a chink in the film's goodwill armour.

The aforementioned armour of goodwill is built and held together by the levity and likability Tom Cruise brings to his role as Barry Seal. While never as complex and intelligent as a Walter White, Seal, as portrayed on screen, is a man of simple tastes and needs. He'd rather fall asleep than cheat on his wife with random women; he wants to fuel his insatiable need to have the finer things in life by earning truckloads of money, he wants to listen to the men who'll keep his family fed initially and the men who'll keep him alive eventually. Seal is a simple man who knowingly does a terrible thing sporting a smile worth a million bucks.

While committing the cardinal sin of not having Tom Cruise run in his film - I mean what sort of god allowed that to happen - Doug Liman uses every other aspect of what makes Cruise a bankable star to its fullest extent. Films and performances like this one are when I gladly forgive Cruise for his less than stellar turns in The Mummy or Jack Reacher and follow good old Maverick as he glides along the skies in a movie whose entertainment quotient drops below Top Gun owing only to its lack of quotable one-liners and homoerotic beach volleyball scenes.

While adequate, the supporting cast can rarely upstage Cruise. The supporting cast member could be playing Pablo Escobar or a lingerie-clad wife - the viewer's focus stays on Cruise and Cruise alone. If there is one aspect of the film Tom does not overpower, it is the excellent cinematography reminiscent of films of a bygone era. Employing some distinctive techniques which result in some excellent and tense shots, cinematographer Cesar Charlone (who shot the inimitable City Of God) creates a lush portrayal of the world the film inhabits. In a narrative that rarely offers any room for you to breathe, it's shots that linger for a few seconds over stoic backdrops that offer you some respite from the breakneck pace.

When the movie does not even do you the service of slowly winding down, and sticks to paralleling Barry Seal's meteoric rise to and crushing fall from being the richest man of a Podunk town in Arkansas, it checks the final box on the list to making a wholly enjoyable crime-drama-entertainer. The film rarely affords you any time to question its story or characters or their actions. All it wants to do is quickly tell a tight-knit entertaining tale bolstered by a charming leading man without putting much heed into things like emotional centres and sloppy tearful melodramas. And at that, it succeeds in spades.
Share. Save. Connect.
Tweet
AMERICAN MADE SNAPSHOT 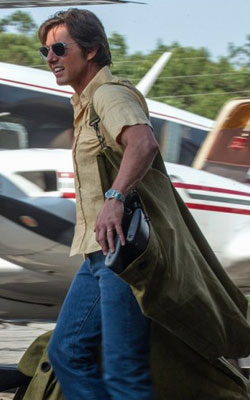 See American Made full details
AMERICAN MADE USER REVIEWS
1 - 1 OF 1 COMMENTS
POSITIVE  |  NEGATIVE |  NEWEST  |  OLDEST  |  MOST HELPFUL  |  LEAST HELPFUL
USER RATING
8.0
1 USER
Performances
Script
Music/Soundtrack
Visuals
10.0
7.0
4.0
10.0
Can watch again - No
Good for kids - No
Good for dates - Yes
Wait to rent it - No
The Common Movie Goer on 1st Oct 2017, 4:56am | Permalink
Caught this movie yesterday. It was amazing. I love Tom Cruise movies, but this movie more about Tom Cruise the actor rather than Tom Cruise the movie star. It's as light-hearted as political satires can get without sacrificing realism. I saw this in the US, and the hall was pretty empty yesterday. He's lost most of his mojo here, but I hope this movie goes on to earn a lot of money at the international BO. Tom Cruise has been on a roll in the last few years (except for the horrible Mummy and the B-Movie JR-Never Go Back).

The director's previous collab with Tom Cruise was definitely on the best movies I had ever seen (Edge of Tomorrow). MI6 and Jack Reacher (the first one) were amazing and the set pieces were enthralling. I am quite sure those who like fast paced, story focused, and smartly written movies will dig this. Just don't expect a left-handed gun toting Tom Cruise, and you're good to go. Watch it for some (slightly made-up) history lessons and great character insights.
RATING
8
TJ Reddy on 1st Oct 2017, 7:37am | Permalink
Working in the film's favor is the fact that it's a mid-budget movie. Going by the rule of thumb it has to make 100 million to be considered a success and its easily going to make that. Good for Cruise, he's one of those actors who commit to giving his audience a good time at the theatres.
LEAVE A COMMENT
fullhyd.com has 700,000+ monthly visits. Tell Hyderabad what you feel about American Made!
MORE MOVIES
Latest Reviews
Akhanda
Satyameva Jayate 2
Ghostbusters: Afterlife
Eternals
Eternals (Telugu)
more
Eternals (Hindi)
Dune
Venom: Let There Be Carnage
No Time To Die - Telugu
No Time To Die - Hindi
No Time To Die
SR Kalyana Mandapam
Ippudu Kaaka Inkeppudu
Thimmarusu
Kadhanika
Contemporary Reviews
Chef
Blade Runner 2049
The Lego Ninjago Movie
Raju Gari Gadhi 2
The Foreigner (Telugu)
more
The Foreigner
Victoria And Abdul
Judwaa 2
Mahanubhavudu
Spyder
Kingsman: The Golden Circle ...
Kingsman: The Golden Circle
Newton
Bhoomi
Random Reviews
Naughty Love (Number One Fan...
Chiranjeevulu
The Bourne Identity
XXX 2 (Telugu)
Disclosure
more
Murari
Blood Diamond
Roadside Romeo
Shambo Shiva Shambo
Rajani (Upendra)
Safe House
Django Unchained
Gunday
I (Tamil)
Hellboy (2019) Hindi
SEARCH MOVIES
Dissatisfied with the results? Report a problem or error, or add a listing.
ADVERTISEMENT
SHOUTBOX!
{{todo.name}}
{{todo.date}}
[
ip{{todo.ip}}
]
{{ todo.summary }}... expand »
{{ todo.text }} « collapse
First  |  Prev  |   1   2  3  {{current_page-1}}  {{current_page}}  {{current_page+1}}  {{last_page-2}}  {{last_page-1}}  {{last_page}}   |  Next  |  Last
{{todos[0].name}}

ADVERTISEMENT
This page was tagged for
American Made english movie
American Made reviews
release date
Tom Cruise, Sarah Wright
theatres list
Follow @fullhyderabad
Follow fullhyd.com on
About Hyderabad
The Hyderabad Community
Improve fullhyd.com
More
Our Other Local Guides
Our other sites
© Copyright 1999-2009 LRR Technologies (Hyderabad), Pvt Ltd. All rights reserved. fullhyd, fullhyderabad, Welcome To The Neighbourhood are trademarks of LRR Technologies (Hyderabad) Pvt Ltd. The textual, graphic, audio and audiovisual material in this site is protected by copyright law. You may not copy, distribute, or use this material except as necessary for your personal, non-commercial use. Any trademarks are the properties of their respective owners. More on Hyderabad, India. Jobs in Hyderabad.