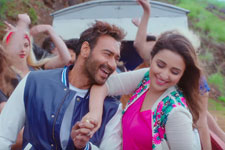 As I heard her laugh on the other side, I said to myself "TJ, dude! So this is what things have come to - two idiots on either side of a call but for once I was idiot-est and she was idiot-er."

Let's be honest here, her laughing at my trepidation was warranted. What did I have to look forward to? Golmaal "the beloved franchise" returning after 7 years? No! Watching Tusshar Kapoor onscreen doing his aa-ee-ae-oo bull****? NO! The fact that I'm going to be watching a Rohit Shetty film? NOO! The fact that Rohit Shetty and co dragged one of the finest actresses of our time and my teenage dream Tabu into this mess? FRACK, NO!

Literally every sign pointed towards this movie being an unfunny, unfocused, talent-wasting mess, including a song that bellowed "Hum Nahi Sudhrenge" and Tabu's opening voiceover where she said these ironic lines poetically, "If God's will is on your side, you don't need logic, because everything is magic." I sat there thinking, "Yeah. Look at your director's inexplicable career."

The movie laid its cards firmly on the table, and the fear that this film would not even surpass the lowest of my expectations surged through my spine. One screening of Golmaal Again later, I was pleasantly surprised. Even though I cracked a smile as much as two whole times, the film itself had a concise story, and in place of needless excess, unfunny gags and genuine tone-deafness (though there was some of all of that), it had decent writing, direction and acting. I walked away quietly choosing not to pinch myself, because if this was a dream, it was a damn near perfect one, and if I'm wrong with this review, don't tell me. Ignorance is bliss indeed.

Golmaal Again's plot is a Rohit Shetty-flavoured mesh of The Blues Brothers and Karz. 5 orphans Gopal (Ajay Devgn), Lakshman (Kunal Khemu), Lakshman (Shreyas Talpade), Lucky (Tusshar Kapoor) and Madhav (Arshad Warsi) reside in an orphanage in Ooty. On one not-so-cold and not-so-rainy night, they find a baby at the doorstep of their not-so-humble abode. Taking this baby in and naming her Khushi, the boys form an unbreakable bond with both the house and the girl.

While their early upbringing is monitored by librarian Ana "I see dead people" Matthew (Tabu) and the owner of said orphanage, the boys get too big for their britches as they constantly indulge in fights that disrupt the peace. After being chided for their misdemeanours, all five leave the orphanage only to return 25 years later after being informed of the death of their beloved orphanage's owner.

While most things seem hunky-dory on the surface, evil is afoot as the fivesome's peace is plagued by a ghost and the orphanage's very existence is in peril thanks to a real estate deal that reeks of more fouls playing that a chicken coop. The men join forces with Ana, Khushi (Parineeti Chopra) and returning cameos Vrijesh Hirjee, Johnny Lever, Sanjay Mishra and more to save their orphanage and overcome their fear of the supernatural and enable me overcome mine of Rohit Shetty films.

Almost going against type, Rohit Shetty holds himself to a higher standard by focusing on the plot (for the most part) and not cramming the film with unnecessary bouts of slapstick comedy and cheaply written character development. While the latter results in five leads with no discernable distinction (even the wardrobes and beards of all five are the same), the film manages to avoid becoming another one of Shetty's 150-minute long practical jokes played on the audience.

I rarely judge actors by the performances they turn on in movies like this one as I know, as well as they do, that they're in it for the fun of it. Except for Ajay Devgn who lacks comic timing and delivers occasional stilted line readings, every man, woman and child in the cast delivers on what is promised. While no one steals scenes or breaks new ground, they, like the film they are in, are passable, entertaining and non-annoying, even if two of the leads have grating speech impediments.

Like any half-decent South Indian mass movie (which is literally what Rohit Shetty's films are) the songs are composed by S Thaman and a few of his cohorts. Like the cinematography, the music is loud, bright and colourful, but rarely will any of it register in the grand scheme of things as there are no stylistic choices and changes made in accordance with changing scenes and acts.

And that half-hearted critique of the film's technicalities is where I stand. No, I was not rolling in the aisles laughing like a few of the people in my hall were, but I cannot say the movie is unwatchable either. There is a charm to seeing Shetty and crew not rest on their "laurels" as they try to deliver something fresh to their audiences. There is excess but there is restraint, and there are pacing issues but there is enough going on screen to keep one entertained at all times. Baby steps for Rohit Shetty here, and who knows, he might make an unironically good film after a few more attempts.

When the most offensive part of a Bollywood comedy is two men insensitively wearing Klu Klux Klan robes as ghostly garb (sure most Indians won't get the context, but you are releasing this film worldwide right?) instead of crude sex jokes and copious amounts of inane sequences, you've done something right.
Share. Save. Connect.
Tweet
GOLMAAL AGAIN SNAPSHOT 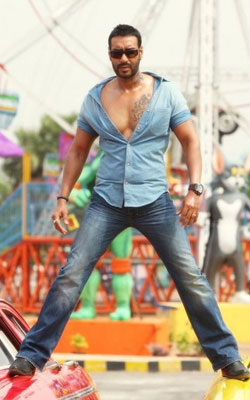 ADVERTISEMENT
This page was tagged for
golmaal again movie in hindi
Golmaal Again hindi movie
Golmaal Again reviews
release date
Ajay Devgn, Parineeti Chopra
Follow @fullhyderabad
Follow fullhyd.com on
About Hyderabad
The Hyderabad Community
Improve fullhyd.com
More
Our Other Local Guides
Our other sites
© Copyright 1999-2009 LRR Technologies (Hyderabad), Pvt Ltd. All rights reserved. fullhyd, fullhyderabad, Welcome To The Neighbourhood are trademarks of LRR Technologies (Hyderabad) Pvt Ltd. The textual, graphic, audio and audiovisual material in this site is protected by copyright law. You may not copy, distribute, or use this material except as necessary for your personal, non-commercial use. Any trademarks are the properties of their respective owners. More on Hyderabad, India. Jobs in Hyderabad.