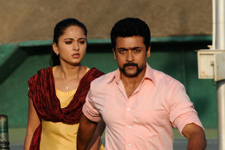 Ravi Kandala / fullhyd.com
EDITOR RATING
7.0
Performances
Script
Music/Soundtrack
Visuals
7.0
5.0
5.0
7.0
Suggestions
Can watch again
No
Good for kids
No
Good for dates
No
Wait for OTT
No
We could end it in one line - if you liked Yamudu (unofficially Singam 1) then you will like Singam (officially Yamudu 2). And if you thought Yamudu was one of those flicks that hit the jackpot because it was a smartly packaged Tamil film being sold to Telugu audiences, then Singam is more of the same. The one thing we could infer for sure is what the "2" in Yamudu 2 means - that this Yamudu will kill two things dear to you - your eardrums. Both of them.

Singam starts off where Yamudu left off. And takes the decibel levels to the next level, actually a few levels up. Narasimham (Surya) has now gone undercover. He is working as an NCC teacher in a school in Kakinada. His plan is to carry out a secret surveillance of the arms being smuggled from the coast, and to take charge as DSP of the town when he has full information about the network, and then to destroy the network once and for all.

He then finds out that there is an entire drug racket being run from the town, by Bhai (Mukesh Rishi) and Thyagaraju (Rehman).

The rest of Singam deals with the man-lion ("nara-simham") taking charge of the town and arresting not just Bhai and Thyagaraju, but also an international drug dealer, Danny. Danny is a dreaded don who's not set foot on land for the last 12 years, and has made a ship his home. The first time he sets foot on land, after twelve years, is not in any exotic location - it is in Kakinada, for a party thrown by one of his partners!

The film has minor deviations into Narasimham's love life and family life, with some character actors including Nasser and the heroines Anushka and Hansika, and some small comedy bits involving current Tamil-favourite Santhanam and old Tamil-favourite Vivek.

Anushka has shed the flab, and is a treat to the eyes for the short while that she's there, while Hansika squeezes into dresses three sizes smaller and manages to appear non-flabby.

Which brings us to the man of the moment - of all moments of the film actually - Surya. Surya is his usual intense self, and portrays the character with great ease. But he is incredibly loud. He screams out all his lines, and his goody-two-shoes bit gets to you after a while. He will, however, bring the moustache back into fashion, and he shows off his body just enough to keep his female fanbase happy.

Hari manages to put some thought into the story, which is credit-worthy, but the film's deviation into foreign territory in the end defies all logic and convention, even though we were not looking for any. For one, arresting an international drug dealer in an alien nation is not as easy as it is made out to be. And when the said drug dealer is brought back to India, you would hardly expect him to be locked up in the 2-Town Police Station in Kakinada! Our man-lion does all this with consummate ease.

The music is strictly of the filler-variety, and you even have a song that goes "Let's Do The Singam Dance". Devisri Prasad dishes out tunes from his cupboard, and the producer shells out enough money to shoot them in a glitzy manner.

The technical aspects are all good. One complaint though, is about the inconsistency in trying to show Telugu locations and names. In some scenes, utmost care is taken, with all vehicles being given Andhra Pradesh number plates, while in other scenes, the name plate on the Chief Minister's table spells his name out in Tamil. We wouldn't normally rant about these, but when you've taken so much care for a large part of the movie, such exclusions rankle. 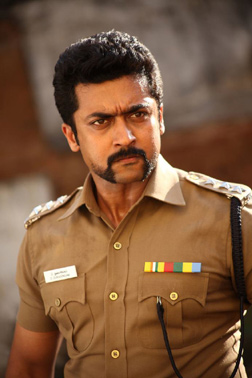 ADVERTISEMENT
This page was tagged for
singham 1 movie in telugu
yamudu 2 charater names
Singam (Yamudu 2) telugu movie
Singam (Yamudu 2) reviews
release date
Follow @fullhyderabad
Follow fullhyd.com on
About Hyderabad
The Hyderabad Community
Improve fullhyd.com
More
Our Other Local Guides
Our other sites
© Copyright 1999-2009 LRR Technologies (Hyderabad), Pvt Ltd. All rights reserved. fullhyd, fullhyderabad, Welcome To The Neighbourhood are trademarks of LRR Technologies (Hyderabad) Pvt Ltd. The textual, graphic, audio and audiovisual material in this site is protected by copyright law. You may not copy, distribute, or use this material except as necessary for your personal, non-commercial use. Any trademarks are the properties of their respective owners. More on Hyderabad, India. Jobs in Hyderabad.