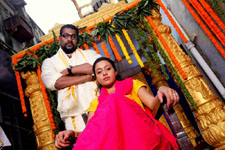 Ajay Kumar R / fullhyd.com
EDITOR RATING
3.0
Performances
Script
Music/Soundtrack
Visuals
5.0
3.0
5.0
6.0
Suggestions
Can watch again
No
Good for kids
No
Good for dates
No
Wait to rent it
No
Director S J Chaitanya, in his new venture Aavu Puli Madhyalo Prabhas Pelli, tries to make light of the mystery surrounding Tollywood actor Prabhas' bachelorhood ever since the runaway success of the latter's blockbuster Baahubali: The Beginning by incorporating the rumour into a dark comedy about an actor who goes by the name Prabhas (Ravi Teja).

Protagonist Prabhas is a short-film actor and a Prabhas impersonator. He breathes in the actor in every role he takes up (or so we are led to believe). He is on the job of searching for an actress suitable for his next venture. While on it, he falls in love with colleague Anushka (Bhanu Sri). But he soon finds out that she is getting married to someone else offering her family a huge amount of money. And so Prabhas decides to earn the amount himself and free her from the impending marriage.

Meanwhile, he stumbles upon a distraught Amrutha (Aswini Chandra Sekhar), sister to dreaded Nalgonda factionist Nagaram Nani. Amrutha wants to elope with her lover as she fears her brother's wrath. Prabhas strikes a deal with her that he will help her elope, provided she pays him a hefty amount, which he can then use to free Anushka.

In a pretty formulaic way, the film then showcases Prabhas putting his acting skills to use to help Amrutha escape, basing his attempts on the whole Prabhas bachelorhood gossip.

Using antagonist Nani, played by Baahubali fame Prabhakar (Kalakeya), S J Chaitanya attempts to create a dark comedy, but fails to blend violence, fear and laughter in the precise proportions. The story puts you in plenty of confusion, especially if you are unaware of the gossip surrounding actor Prabhas' marriage. Also, the entire exercise of duping a factionist and eloping with his sister seems reckless and pointless, when all that was needed was reasoning with him, given that Prabhas is shown as having amazing powers of persuasion.

However the movie does have oodles of comedy, with the writers having put plenty of thought into it. The antagonists are all hilarious and have impressive comic timing. Teja and Aswini, too, showcase an admirable flair for comedy in several scenes. But it is difficult to mix genres that are polar opposites (comedy and gravitas) and execute them perfectly, especially when there isn't much material to look up to in the regional industry. And this is where the movie starts falling apart. Chaitanya needs to look to Bollywood, which has managed to produce a few good black comedies in the past with above average success.

Ravi Teja emotes well, but you can barely notice any Prabhas in him anywhere in the entire two-hour film. That does injustice to his role as an impersonator. Neither Aswini Chandra Sekhar nor Bhanu Sri takes off in her debut, and their performances are average. Baahubali fame Prabhakar does a poor job as a feared mafia kingpin, and is totally wasted - the director clearly relies too much on him, but he cannot be expected to do a Bahubali in every venture he takes up.

The visuals (Ganesh Arti) are typical of dark comedies with the rendering of colours in sepia, but are good enough. Kavi Shankar's music however doesn't add much grimness to the narrative. 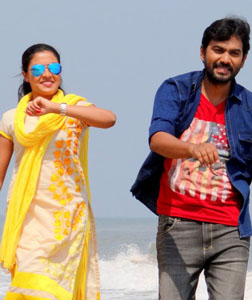 ADVERTISEMENT
This page was tagged for
aavu puli madhyalo prabhas pelli geners
telugu aavu puli prabhas pelli
Aavu Puli Madhyalo Prabhas Pelli telugu movie
Aavu Puli Madhyalo Prabhas Pelli reviews
release date
Follow @fullhyderabad
Follow fullhyd.com on
About Hyderabad
The Hyderabad Community
Improve fullhyd.com
More
Our Other Local Guides
Our other sites
© Copyright 1999-2009 LRR Technologies (Hyderabad), Pvt Ltd. All rights reserved. fullhyd, fullhyderabad, Welcome To The Neighbourhood are trademarks of LRR Technologies (Hyderabad) Pvt Ltd. The textual, graphic, audio and audiovisual material in this site is protected by copyright law. You may not copy, distribute, or use this material except as necessary for your personal, non-commercial use. Any trademarks are the properties of their respective owners. More on Hyderabad, India. Jobs in Hyderabad.