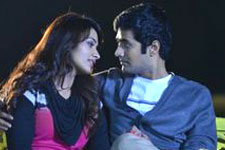 Daphne Rose / fullhyd.com
EDITOR RATING
2.0
Performances
Script
Music/Soundtrack
Visuals
2.0
1.0
2.0
2.0
Suggestions
Can watch again
No
Good for kids
No
Good for dates
No
Wait to rent it
No
While channel surfing as a kid once, I remember chancing upon a Telugu film which looked like it had been made in the mid-eighties. The scene I inadvertently landed upon was one wherein some boss man, a cruel, joker sort, unkind to his aides, asks his assistant for a glass of water. In a bid to get back at him for his mean spirit, the assistant brings him "water" from, get this, *inside* a western commode, with the scene actually showing the former drinking it up amidst background music that indicated that this was supposed to be a funny scene. Needless to say, I was scarred for life, and have had a deep and abiding anathema for toilet humour ever since.

Imagine my luck then when I end up smack-dab in the middle of a movie that abounds in such sort of ridiculous humour.

Director Satya's Hyderabad Love Story was in the cans for four years apparently, and even after securing a release date, has seen no publicity drives from its lead cast of Rahul Ravindran and Reshmi Menon. Sit through just five minutes of the movie and you'll know why.

Touted as a rom-com, this is the kind of film that peddles women taking calls mid-coitus, a businessman trying to secure a project by pimping women out, loose motion and fart jokes, and straight men mistaken for being gay just because they won't indulge in hanky-panky of any sort, as "humour".

All of which you might still forgive and forget given ample time (give or take a few centuries), but then the movie goes on to appropriate the tag Hyderabad for its title, and that's when you know that you'll never make your peace with each other. Not that Hyderabad or any of its landmarks play any pivotal role in this story - they don't. The movie could've been shot in Wanaparthy, Gajuvaka or Ho Chi Minh City, and no one would've been the wiser.

The story, not that there's one, revolves around Bhagyalakshmi (Reshmi Menon), a woman who doesn't know the difference between being naive and downright stupid, and is frankly too dumb to survive in any century, forget the 21st. She's a klutz, communes with the moon as "Chandamama" and "dude", and pirouettes as she shouts "yayyy" to exclaim her happiness. The last time I saw any self-respecting woman do the latter was myself in kindergarten - lower, at that.

Bhagyalakshmi chances upon Karthik (Rahul Ravindran) in a hangover-laden drive back home one night and promptly falls in love. Karthik is the Chief Engineer of the Metro Rail Project underway in Hyderabad (this is 2014, remember?) and is the sole bright spot in this miserable tale. He's stalked day in and out by Bhagyalakshmi, but to no one's surprise ends up reciprocating her feelings.

Trouble arises with the entry of Karthik's ex-girlfriend Vaishnavi (Jiya) who convinces Bhagyalakshmi that Karthik is more interested in men than women. And how, pray, has she arrived at this conclusion? Because Karthik makes no move on her or Bhagyalakshmi (goodbye, chivalry). And Bhagyalakshmi being the airhead that she is, actually believes her and accuses Karthik of "not being a gentleman". Why? Because "gentlemen" in our dear Bhagi's definition only like women (this is where I blow my brains out).

Thereafter follows the flashback with some semblance of a story. But it doesn't matter because people are already leaving the theatre by this point. Not me, though, since I have to sit through it to write my "honest review". There are a doctor, loving parents, an ailing brother and a hurriedly put together climax on this side of the interval should you really care to stay and watch, which IMHO, you shouldn't.

The movie might've been passable fare but for the vomit it tries to stuff down your throat in the name of comedy. I give this one two stars solely for Rahul Ravindran's earnestness and Reshmi Menon's cuteness - in that order. But other than that, there's absolutely nothing to recommend in this travesty of a movie.
Share. Save. Connect.
Tweet
HYDERABAD LOVE STORY SNAPSHOT 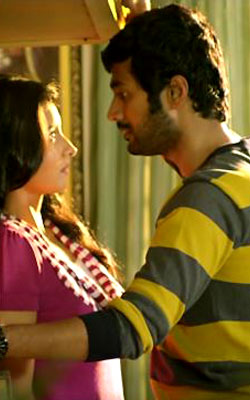 ADVERTISEMENT
This page was tagged for
download hyderabad love story telugu movie jiorockers
love story movie telugu jio rockers
Hyderabad love story full movie download in jio rockers
Hyderabad love story full movie download jio rockers
rdx love full movie in jio rockers
Follow @fullhyderabad
Follow fullhyd.com on
About Hyderabad
The Hyderabad Community
Improve fullhyd.com
More
Our Other Local Guides
Our other sites
© Copyright 1999-2009 LRR Technologies (Hyderabad), Pvt Ltd. All rights reserved. fullhyd, fullhyderabad, Welcome To The Neighbourhood are trademarks of LRR Technologies (Hyderabad) Pvt Ltd. The textual, graphic, audio and audiovisual material in this site is protected by copyright law. You may not copy, distribute, or use this material except as necessary for your personal, non-commercial use. Any trademarks are the properties of their respective owners. More on Hyderabad, India. Jobs in Hyderabad.