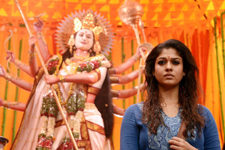 Ravi Kandala / fullhyd.com
EDITOR RATING
5.5
Performances
Script
Music/Soundtrack
Visuals
6.0
7.0
7.0
7.0
Suggestions
Can watch again
No
Good for kids
No
Good for dates
No
Wait to rent it
No
Kahaani is a modern-day classic. The dark thriller had enough layers that people talked about it days after watching it. The fact that Sujoy Ghosh did not think that the audience was dumb or take them for granted and explain every single nuance or detail in the script was appreciated.

That it would be remade was almost inevitable - who does not want to cash in on success? But that Sekhar Kammula, the feel-good, slice-of-life movie maker, would remake it was completely unpalatable to many Tollywood buffs. And coming off a dud like Life Is Beautiful, Kammula could not build up any kind of hype for Anamika. In fact, the completed film had to wait for a couple of months in the cans before it could even find a release. Counter-intuitively, all of this might just help Anamika get a decent run, due to the low expectations of it.

Anamika takes the skeleton of Kahaani as its core - a lonely NRI arriving from the US in search of her "missing" husband. Anamika (Nayantara) arrives from the US and takes a taxi directly to a police station. There she files a missing complaint about her husband, Ajay Shastri (Harshavardhan Rane).

She befriends an inspector, Saradhi (Vaibhav), and tries to trace her husband. Everyone who is connected to the case starts dropping dead, and Anamika is left cornered. What happens next is something everyone who's seen Kahaani expects to know. And that is where Kammula takes you by surprise.

Kammula had promised that after the first 10 minutes, you would forget that you were watching a Kahaani remake. And he come through on that. He succeeds to a fair extent in pouring the essence of Kahaani into a completely different mould. The dark atmosphere of Kolkata is replaced with the congested bylanes of the Old City. The interspersed Namaaz and Durga Puja chants that greet our heroine every morning provide a beautiful background to the story, and lend either loudness or calm as demanded by the current scene.

The film is shot quite well, and the viewer is pulled into the suffocation that the heroine feels in the rundown room she stays in. The lighting and other aspects are also handled quite well. Where Anamika fails is in keeping up the suspense. Though the movie unfolds at a decent pace and has quite a few twists, the audience can pretty much guess the end right at the beginning of the second-half. The rushed ending to the police track in the end and the drawn out conclusion to the main track spoil the impact created through the movie.

Keeravani's background score, though a bit loud at places, elevates the film all through. Nayantara conveys the vulnerability of a lonely woman and the resilience of a cornered one with ease, while Vaibhav plays the smitten young police officer with a hitherto unseen level of comfort. Pasupathi is good as the senior officer, though you miss Nawazuddin Khan's rough performance. The actor who plays Bob Biswas is not a patch on the original either.

Anamika is a bunch of hits and misses put together. The film succeeds in drawing you in irrespective of whether or not you've seen Kahaani, but falls flat in maintaining the suspense till the end. Nonetheless, it is a brave attempt that deserves some applause.
Share. Save. Connect.
Tweet
ANAMIKA SNAPSHOT 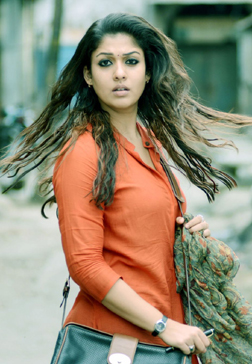 ADVERTISEMENT
This page was tagged for
Anamika telugu movie
Anamika reviews
release date
Nayanthara, Vaibhav
theatres list
Follow @fullhyderabad
Follow fullhyd.com on
About Hyderabad
The Hyderabad Community
Improve fullhyd.com
More
Our Other Local Guides
Our other sites
© Copyright 1999-2009 LRR Technologies (Hyderabad), Pvt Ltd. All rights reserved. fullhyd, fullhyderabad, Welcome To The Neighbourhood are trademarks of LRR Technologies (Hyderabad) Pvt Ltd. The textual, graphic, audio and audiovisual material in this site is protected by copyright law. You may not copy, distribute, or use this material except as necessary for your personal, non-commercial use. Any trademarks are the properties of their respective owners. More on Hyderabad, India. Jobs in Hyderabad.