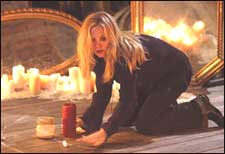 Ghazala Rizvi / fullhyd.com
EDITOR RATING
5.0
Performances
Script
Music/Soundtrack
Visuals
NA
NA
NA
NA
Suggestions
Can watch again
NA
Good for kids
NA
Good for dates
NA
Wait to rent it
NA
The Skeleton Key is among the lesser of the juicy yarns that scare-flicks go by. For all those who believe in extracting their money's worth in terms of panic-perspire-spine-chill reaction, this is not a movie to indulge in. It builds-up little in terms of adrenaline, targeting your curiosity more than your senses. But based on its logical presentation, and good performances, it makes a good watch, especially for the novices who want to dabble in the horror-genre.

As the movie's tagline goes, if you believe, you can believe yourself into getting goose-bumpy by the flick - there are black-magic spells that make you ill, lynchings that almost feel justified, and mumified human organs bordering on gore. However, if you choose to brave on with a pinch of salt, then you'll land up staring at abundant but harmless Hoodoo paraphernalia, lab-specimens, dewy-eyed old hags, and a house that's like, well, any other you've seen before.

The story goes this way. Carolina Ellis (Kate Hudson) is a young energetic hospice worker, who gets a call to look after the paralytic Ben Devereaux (John Hurst) at a countryside house in Louisiana. The job is finalized through Luke (Peter Sarasgaard), who is the lawyer and acquaintance of the Devereauxs.

Violet Devereaux (Gena Rowlands) is a dominating wife who likes to keep things, including her husband Ben, under her thumb. Carolina and Violet gel like napalm and charge - there are fireworks whenever the duo meet on screen. Violet has patented interesting aversions, like ensuring a mirror-free house, and declaring her attic a do-not-disturb area. For Carolina, mirror-shunning and minding-her-own-biz are too much to ask for from someone as attractive and as inquisitive as herself.

Ignoring the rule that going against the wishes of one's employer is an easy route to unemployment, Carolina sails forth on her own journey of exploration. She sees her dead father in Ben, at least emotianally. Hoodoo or not, she also feels the palpable vibes that Ben directs at her - and correctly assumes them to be cries for help. Her quest to help the dying man leads her across doors kept tightly locked. She stumbles over the in-house assembly-line of Hoodoo end-and-by-products - human dolls with their eyes and lips sewed, jars of pickled heads and hands, assortment of bones, powders, conjurer records and chalk...

While ordinary mortals would have developed cold feet, Carolina goes trotting all over town in search for counter strategies for what she believes ails Ben - his wife's desire to cut and paste a few years of his life to her own life-span, via Hoodoo. Carolina's rescue endeavors slowly make her a believer - and that's when the real trouble begins.

Kate Hudson has proved that there is more to her than what can be hidden in her panties - though she does look good in her scanty nightwear. Matching wits with Gena Rowlands (who herself, at 75 years, has surpassed all conventions and rules of acting), Kate has given a credible performance, blending the right mix of fear, curiosity and anger in her act. Peter Sarasgaard, as the sweet and subtle Luke, throws you off-track by appearing redundant in the first half. The man, as the movie, pick up pace slowly.

The Skeleton Key ends with a climax which will hit you harder than any assets requisitioned to scare you throughout its reel. Not only is it unconventional, it will also make the entire flick flash back across your eyes with chunks of revelations falling in places where there were gaps before. It certainly falls short of a nail-biting and spine-tickling pace - with the fear factor entirely left to your imagination. It is an entirely new genre within the genre of scare-flicks - not wanting to harass your senses with peripherals, but enigmatic enough for you to feel satiated in the end.
Share. Save. Connect.
Tweet
THE SKELETON KEY SNAPSHOT

See The Skeleton Key full details
THE SKELETON KEY USER REVIEWS
1 - 1 OF 1 COMMENTS
POSITIVE  |  NEGATIVE |  NEWEST  |  OLDEST  |  MOST HELPFUL  |  LEAST HELPFUL
USER RATING
9.3
3 USERS
Performances
Script
Music/Soundtrack
Visuals
NA
NA
NA
NA
Can watch again - NA
Good for kids - NA
Good for dates - NA
Wait to rent it - NA
Sunil Bhardwaj on 11th Dec 2005, 6:16pm | Permalink
A good movie who r in love with occult sciences. The story revolves around a 25-year old girl (Kate Hudson)who gets a job as a caretaker living in a plantation home in Terrebone Parish, Louisiana. She soon discovers the scary attic in the house,with all sorts of hoodoo recipes, spells, books, etc. She starts to investigate and uestion Violet (Gena Rowlands), the owner of the house, about the secrets.

But if she believes in what she discovers, it will all become real!

The movie gets more interesting towards the end....

ADVERTISEMENT
This page was tagged for
The Skeleton Key english movie
The Skeleton Key reviews
release date
Kate Hudson, Gena Rowlands
theatres list
Follow @fullhyderabad
Follow fullhyd.com on
About Hyderabad
The Hyderabad Community
Improve fullhyd.com
More
Our Other Local Guides
Our other sites
© Copyright 1999-2009 LRR Technologies (Hyderabad), Pvt Ltd. All rights reserved. fullhyd, fullhyderabad, Welcome To The Neighbourhood are trademarks of LRR Technologies (Hyderabad) Pvt Ltd. The textual, graphic, audio and audiovisual material in this site is protected by copyright law. You may not copy, distribute, or use this material except as necessary for your personal, non-commercial use. Any trademarks are the properties of their respective owners. More on Hyderabad, India. Jobs in Hyderabad.