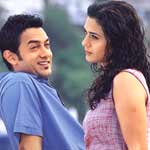 Chinmayi Sirsi / fullhyd.com
EDITOR RATING
7.5
Performances
Script
Music/Soundtrack
Visuals
NA
NA
NA
NA
Suggestions
Can watch again
NA
Good for kids
NA
Good for dates
NA
Wait for OTT
NA
After watching tons of movies with promos that promise the earth, the sky and everything in between but give you boredom, or worse, inanity, a reviewer tends to get kind of cynical. As movie after movie crashes expectations, he begins to expect very little - you know, that "once bitten..." thing. So when a film comes along that actually delivers what it promises, you are pleasantly surprised - and how!

Dil Chahta Hai is a wonderful example of what the largest film industry in the world can do if it only puts its mind(s) to work. A tale of three young men, their young and not-so-young women, their disappointments and their victories, their joy and their pain - Dil Chahta Hai warms you with its honesty, its intensity and its commitment to telling a tale. The entire story is upper-class, yes, but it is endearingly so. No pretenses here - no cheap tricks to keep the audience involved, no careless (non-)sequences, no slapstick comedy, and very few unnecessary scenes.

Akash (Aamir Khan), Sameer (Saif Ali Khan) and Siddharth (Akshaye Khanna) are the best of friends, though that doesn't mean they are anything like each other. Akash laughs at the world and does not believe in love, Sameer falls in love with every other girl he meets, and Siddharth, a painter, lives an intense inner-life. The first half of the movie deals solely with the characterization of the three and their relationship with each other and the world. With the help of a large and efficient support cast, backgrounds are brought in with subtlety, and individual characteristics are grounded so well, you begin to think you know these guys personally.

Siddharth meets and falls in love with Tara Jaiswal (Dimple Kapadia), a divorcee much older than him. The treatment of this relationship is sensitive and quite believable, and though the film chooses not to portray reciprocation on Tara's part, this could be the beginning of other Bollywood directors going down these roads less traveled.

To move on, the three friends go on holiday to Goa and have a ball. Sameer finally meets his true love, Pooja (Sonali Kulkarni). All goes well until a chance remark about Tara made in jest by Akash gets Siddharth wild at him, and the two part ways. Akash leaves for Sydney to take care of his dad's business, and Siddharth leaves town to attend a long painter's workshop.

Akash (re)meets Shalini (Preity Zinta) on his flight to Sydney, and the two strike an enviable friendship. Being engaged to the irritating Rohit (Ayub Khan) does not stop Shalini from being friends with Akash, and before long our non-believer is deeply in love. The relationship between the two is handled exceedingly well, and the inevitable melodrama that follows takes very little away from the essence of the movie. Inevitable also is the reconciliation between Akash and Siddharth, which, thankfully, happens without melodrama.

One valid complaint one might have of Dil Chahta Hai is its length - it runs for more than three hours. A rather silly song between Saif and Sonali could easily have been avoided and the second half could have been made tighter, more intense. There are times when the movie sags rather badly, making the audience stretch in their seats and goad the guys on screen to get on with it, please. This puts a hitch in an otherwise great movie, and also gets Dil Chahta Hai a lower rating than it would otherwise have deserved.

Aamir Khan gets the best lines, and does a wonderful job with his timing and style. He does get a little more mileage than the other two, but just a little. Saif Ali Khan does a good job, though it is Akshaye Khanna who surprises you with a terrific, understated and warm performance - here's one actor who doesn't get his due in Bollywood. Preity Zinta and Dimple Kapadia give intelligent performances. The songs, some of them quite popular, are nice too.

Dil Chahta Hai is a warm, sensitive and intelligent film, one that restores your faith in Bollywood's ability to make enjoyable cinema. And that's precisely why you should watch it.
Share. Save. Connect.
Tweet
DIL CHAHTA HAI SNAPSHOT

ADVERTISEMENT
This page was tagged for
Dil Chahta Hai hindi movie
Dil Chahta Hai reviews
release date
Aamir Khan, Akshay Khanna
theatres list
Follow @fullhyderabad
Follow fullhyd.com on
About Hyderabad
The Hyderabad Community
Improve fullhyd.com
More
Our Other Local Guides
Our other sites
© Copyright 1999-2009 LRR Technologies (Hyderabad), Pvt Ltd. All rights reserved. fullhyd, fullhyderabad, Welcome To The Neighbourhood are trademarks of LRR Technologies (Hyderabad) Pvt Ltd. The textual, graphic, audio and audiovisual material in this site is protected by copyright law. You may not copy, distribute, or use this material except as necessary for your personal, non-commercial use. Any trademarks are the properties of their respective owners. More on Hyderabad, India. Jobs in Hyderabad.