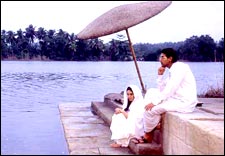 Samrat Sharma / fullhyd.com
EDITOR RATING
6.0
Performances
Script
Music/Soundtrack
Visuals
NA
NA
NA
NA
Suggestions
Can watch again
NA
Good for kids
NA
Good for dates
NA
Wait for OTT
NA
Call me a heartless fathead, but despite the noble intent of Deepa Mehta's Water, her last film in the self-designed elemental trilogy, despite the obvious plight of widows shown and very clearly despite all the universal acclaim the film is getting, it just didn't overwhelm me the way it should have. The film has some very strong points and some things that work beautifully, but as noble as the intent may be, as a film it takes as many missteps as it makes right decisions.

This is Mehta's tour de force, and she whips up a very tight film, true, but the end product is what I would like to call firang-friendly. As an Oscar aspirant, it is required to spell out a lot to the audience, which may be slightly disconcerting to people who already know what they are talking about, but more than that it plays to the western voyeurisms of Third World problems, and their fascination with certain aspects of our culture, to tell its story. Riot of colors, songs, traditions, Gandhi - it's all in here.

To top it off, the screenplay of the film is nothing but an excuse for Mehta to show vignettes of the horrors of the widows in a series of events, only to have a third act over-brimming with plot-point denouements. At times it feels like a Madhur Bhandarkar film, only gentler in pace and nicer to look at. Where the film shows that it is miles ahead of Bhandarkar, is his weakest, and Mehta's strongest, point as directors - the film is full of rich, interesting characters, well-etched with masterful acting.

Let's begin with Chuhiya (Sarala). She is an 8-year-old who is sent to the widow ashram after her husband dies, to live a life of quiet penance and renunciation. It's 1938, and these ashrams, and the religious sanction of the oppression of widows, is commonplace.

She is a cheerful child oblivious of the murky goings-on around her, and quickly strikes a friendship with the lovely Kalyani (Ray), and the strong and intelligent Shakuntala (Biswas). Madhumati (Manorma), the resident matriarch, with the help of a eunuch Gulabi (Yadav), pimps out the widows to rich landlords.

These are the strongest characters, and lead to some pretty fine filmmaking on Mehta's part in etching them out beautifully. Shakuntala questions the belief system that has led her here, but is afraid of being shunned altogether. The arrival of Chuhiya awakens a sense of déjà vu as well a long dormant feeling of rebellion and protectiveness in her. When her seething rage erupts in a dignified manner, you awe at the bravado of the moment.

In direct opposition to her is Madhumati, who has a symbiotic relationship with Gulabi, her only window to the outside world. Their relationship is beyond that of business, and it is apparent that they would have been better people had they not been dealt the cruel hands they have to play with. Manorama is fantastic here, and together with a dependable Yadav, they manage to bring a three dimensionality to their roles, thereby emphasizing that there are no bad guys - just bad times.

In the middle of this is the central strand of the film, and the weakest character segment of the film - the forbidden love between Kalyani and Narayan (Abraham), the idealistic son of a rich landlord, whom she meets in a chance encounter. Not only is this a plot we have all seen in different avatars, this is also inhabited by two of the most cipher characters in the film. Ray is beautiful - she just illuminates the screen with her presence - and Abraham looks stately, but both of them have been given characters that are directly out of Bollywood masala.

Their love is also dealt with a very Bollywood inevitability. There are no reasons for their attraction, it just is (to be fair, anyone would be attracted to Lisa Ray). Even as their arc progresses, they keep getting clichéd. The boy transforms from inactive romantic to someone who is willing to follow his ideals, and the girl shuns her turmoil to accept the promise of a better life. Although kept at a minimum, and supported by restrained performances by both, it is this deliberate shoehorning of Bollywood sensibilities in an otherwise Charles Dickensian film that is most jarring.

Both the symbolism that Mehta is aspiring for, and the plot machinations she employs to that effect, are indeed tired by now, but she has a graceful, poetic quality to her storytelling that she still hasn't lost - despite the Oscar pandering, the film has a ring of earnestness to it.

Her control over the production is total, and it shows in the almost lyrical way it is shot by Giles Nuttgens, and the controlled background score and masterful music. There are solid performances all around too, but young Sarala and Biswas own the moments they are on screen, and Manorama and Yadav are especially effective. The overall competency of the production is hard to be missed, really.

*Sigh* And yet, it just didn't work entirely, at least for me. From the mixed sensibilities the film tries to play to the oversimplified manner of presentation, it just seemed to be a bit undercooked. The nobility of the act, the thought behind the tale are to be applauded, surely, but when the screenplay gets overtaken by the very subject it seeks to address, it just serves to disconnect you from the film. Maybe this time, it's not the thought that counts, or maybe I am a heartless fathead.
Share. Save. Connect.
Tweet
WATER SNAPSHOT

ADVERTISEMENT
This page was tagged for
Water hindi movie
Water reviews
release date
Seema Biswas, Lisa Ray
theatres list
Follow @fullhyderabad
Follow fullhyd.com on
About Hyderabad
The Hyderabad Community
Improve fullhyd.com
More
Our Other Local Guides
Our other sites
© Copyright 1999-2009 LRR Technologies (Hyderabad), Pvt Ltd. All rights reserved. fullhyd, fullhyderabad, Welcome To The Neighbourhood are trademarks of LRR Technologies (Hyderabad) Pvt Ltd. The textual, graphic, audio and audiovisual material in this site is protected by copyright law. You may not copy, distribute, or use this material except as necessary for your personal, non-commercial use. Any trademarks are the properties of their respective owners. More on Hyderabad, India. Jobs in Hyderabad.