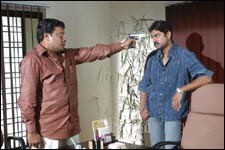 EDITOR RATING
3.0
Performances
Script
Music/Soundtrack
Visuals
NA
NA
NA
NA
Suggestions
Can watch again
NA
Good for kids
NA
Good for dates
NA
Wait to rent it
NA
It helps to plug your movie in the intervals of other films’ screenings. To an extent, at least. Since so few Telugu films are promoted through trailers in movie theaters, you move to the center of the radar screen of upcoming films very fast.

It is an especially good idea if your movie is made like Samanyudu. It brings more people to the theaters before the truth about the film is sufficiently out.

Samanyudu is one of those films that look good in a trailer. They should have ideally stopped making it after they had enough scenes for a trailer – it would have saved money and time, and people would anyway feel it’s a good film based on the trailer. It’s like killing two birds with one bush (or whatever the saying is).

Samanyudu’s problems start right at the beginning – i. e., the drawing board. The screenplay is so poorly thought-out, we are sure they must have messed up even on the font they used for it. The film simply doesn’t grip you anywhere, and there’s not one compelling scene for a movie that is supposed to be a political thriller. And the pace makes you think of a snail that is making up its mind on which way to turn.

Chandra (Jagapati Babu) returns to India after an attack on his father Chandrasekhar (Ranganath) by men belonging to the home minister Bhagawan Raju (Saikumar), who punishes Chandrasekhar for exposing the latter’s misdeeds through his newspaper. When Chandrasekhar does not relent, he is killed by Bhagawan. And Chandra and his brothers (Rajiv Kanakala and Vinod Kumar) and sister Aparna (Archana) take over the paper, determined to expose Bhagawan.

They record some incriminating videos of the minister and his key accomplices, and start blackmailing Bhagawan into spending the hundreds of crores that he has illegally accummulated as minister, to deliver on his election promises. However, soon they realize that there is a spy among one of them who is reporting their plans to Bhagawan, because of which the latter is able to foil their plans, and is on the verge of gaining possession of the videos they shot.

The main plot might have been converted into an excellently narrated tale by a more competent writer-director team. This particular execution is full of logical holes, and progresses at a painfully slow pace. For example, at the end, Chandra leaves Bhagawan to continue as minister because he has transformed. What about all the zillions of crimes he’s committed? And the reasons for the mole, who is one of them, grudging them are so half-baked, you want to personally meet the script-writer, just to see what he looks like.

Then, Chandra is no Samanyudu – he can beat up 10 armed people with bare hands. The romance thread between him and Kamna looks like it targets people with an IQ or an age of 6, whichever is lower. Kamna does not look heroine-material – it’s a surprise they chose her over Archana to be the leading woman. And there’s no explanation for why she runs crying at the end of a comic scene when she discovers Chandra is the boss of the newspaper.

Jagapati works with what he’s got, and Saikumar does not have much scope for his potential, the way his character is written. The music is ordinary, though a song or two have the potential to be hits if the film itself did well. The only mentionable part of the film is some decent look, which is what strikes you in the trailers.

Don’t bother with this one – and if you’ve already watched it, don’t watch it again.
Share. Save. Connect.
Tweet
SAMANYUDU SNAPSHOT

ADVERTISEMENT
This page was tagged for
Samanyudu telugu movie
Samanyudu reviews
release date
Jagapati Babu, Kamna Jetmalani
theatres list
Follow @fullhyderabad
Follow fullhyd.com on
About Hyderabad
The Hyderabad Community
Improve fullhyd.com
More
Our Other Local Guides
Our other sites
© Copyright 1999-2009 LRR Technologies (Hyderabad), Pvt Ltd. All rights reserved. fullhyd, fullhyderabad, Welcome To The Neighbourhood are trademarks of LRR Technologies (Hyderabad) Pvt Ltd. The textual, graphic, audio and audiovisual material in this site is protected by copyright law. You may not copy, distribute, or use this material except as necessary for your personal, non-commercial use. Any trademarks are the properties of their respective owners. More on Hyderabad, India. Jobs in Hyderabad.