Forget cigarettes, booze and colas - it's films like Tere Naam that should come with warning labels. Here's a definitive guide to the various illnesses, disorders and abnormal conditions that come as a package deal with Tere Naam.

Bad-hair-day-osis: (A condition that is generally known to crop up when you have an important meeting/interview/date.)

Case study: Unfortunately (for us and him), Radhe Mohan (Salman Khan) suffers this condition all through the movie. Initially it's with eye-length strands of gelled hair. If that's not a wig, it must be all the hair transplanted from his chest. In the latter part of the film, he sports an indefinable crop that proves to be a worse eye-sore than the first hairstyle (?). Dudes at Habib's, your services are desperately needed! 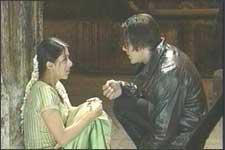 Doormat-itis: (Patients suffering this disease tend to believe that they are rectangular pieces of rubber/jute strategically placed at doorsteps to allow people to rub their muddy shoes clean before entering premises.) Case study: Nirjara (Bhoomika Chawla) is afflicted by this rare condition. She allows the men in the movie (her lover - the goon, the lover's goons, her fiancé and her father) to walk all over her, showing that Hindi cinema's version of the Bharatiya Nari is still alive despite the efforts made by Lara Dutta, Mallika Sherawat, Bipasha Basu et al.

Where's-the-story-algia?: (Disease that audiences catch while catching a flick made by Satish Kaushik, David Dhawan and the entire B-grade Bollywood bandwagon)

Case Study: A theater showing Tere Naam is currently the hotspot for germs carrying this disease. It starts out as a college flick with Nirjara, daughter of a pundit, as a fresher, and Radhe as hanger-on-round-college who passed out years ago. Radhe, the stereotype goon-with-a-heart, falls for Nirjara, who for most part of the film is scared of him. The movie meanders between being an obsessive love story and a Robin Hood take-off. 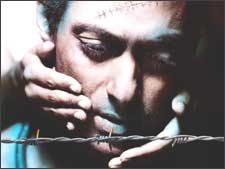 A few good deeds later, she falls for him too. There's time for just one songful of romance between the two, 'cos soon Radhe's head is used as a battering ram by some people he took panga with. A few weird images of the cerebral cortex are flashed on screen, and Radhe is written-off to the loony bin. He doesn't seem to recover, so the doctor recommends that he be sent to a loonier-bin (that looks like a cross between the conventional Bollywood paagal-khana, a prison, The Stonehenge and a shady Ayurvedic massage parlor).

The audience would be on the verge of pulling out their own cerebral cortices at this point, but the story (or the lack of it) gets worse - right down to the very last nerve-grating scene. Blood and gore dominate the screenplay. 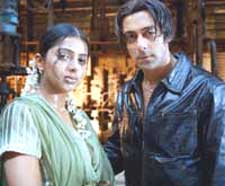 Case Studies: Salman Khan has lost it... the acting skills he possessed during the days of HAHK, Saajan and, more recently, Hum Dil De Chuke Sanam. He looks stoned for most part of Tere Naam. Almost as if he knew right from the start that a remake of a tragic (in more ways than one) South Indian film (Sethu in Tamil, Seshu in Telugu) would flop anyway. He would have preferred to invest energy into activities like chasing models-turned-actresses, which Bhoomika is not.

Bhoomika makes a rather wishy-washy debut in Hindi. Her quivering lips and unglamorous look might have worked in Okkadu, but they look sad in Tere Naam. If Sallu fetches more whistles from the men in the theaters, don't doubt their sexuality... Bhoomika does nothing that elicits even a faint tweet. This disorder afflicts the supporting cast, too - mostly played by unidentifiable actors.

Cacophonia: (Experienced by people who don't "get" heavy metal at a head-bangers' concert)

Finally, a condition that was observed among all those who staggered wearily out of the theater...

Splitting Headache: (Can occur as a side-effect of various diseases, including watching movies with less than a three-star rating.)


i love it really


a story which came from heard


every one loves the way salman khan dress and the way he act,i just think salman khan got the spirt. GO FOR IT SALMAN KHAN YOU DESERVE IT.[ GOOD LUCK FOR THE FUTURE WITH YOUR FILMS.] I JUST LOVE WATCHING YOUR FILMS AND I AM A BIG FAN OF YOURS.


your hairs is best

RATING
10
Sohail Akhtar on 7th Oct 2003, 7:34pm | Permalink
A must see movie for my crazily loved hero Salman. I wish him all success.
RATING
2
Sneha D on 14th Sep 2003, 5:18am | Permalink
Salman Khan acted at his best. No matter what you say, people need to go see the movie. IT'S GOOD!
RATING
8
Vivek Oberoi on 23rd Aug 2003, 4:24pm | Permalink
C'mon, it is a good movie. I liked it very much. You should have seen the person beside me who was crying buckets. Keep up the good work Salman. I don't have any problem with you.
RATING
6
Faiyaz Faiyaz on 19th Aug 2003, 5:31pm | Permalink
Bad films deserve to be criticized. I myself don't see anything wrong with this review.
RATING
2
Victim Of The Review on 19th Aug 2003, 10:36am | Permalink
:(((... Why did I read such a dumb review? fullhyd seems to have gathered some immature writers!!!
RATING
4
Worst Review on 18th Aug 2003, 9:33pm | Permalink
I did not see the movie, but I felt I wasted lot of time by reading the review. You seem to be a good writer, at the same time you seem to have wasted so much time on a stupid movie.
RATING
2
Eagle Eagle on 18th Aug 2003, 5:51pm | Permalink
I don't understand one thing. See, if you want to write a review, write in a good manner. And don't act like a good reviewer. ONE CAN BE SMART BUT YOU ARE OVER SMART. I think this is the worst review I have seen in fullhyd. Of course, the movie is not good, I know that.
RATING
4
Mushy Mushy on 18th Aug 2003, 5:08pm | Permalink
What a dumb review. We know Deepa hates Salman. Go and see the theaters which are showing the film.
RATING
8
Vivek Vivek on 18th Aug 2003, 4:34pm | Permalink
This would have been a punishment, had you seen the Tamil original 'Setu'.
RATING
2
LEAVE A COMMENT
fullhyd.com has 700,000+ monthly visits. Tell Hyderabad what you feel about Tere Naam!
MORE MOVIES
Latest Reviews
Bloodshot
Angrezi Medium
Baaghi 3
Palasa 1978
Sonic The Hedgehog
more
Kanulu Kanulanu Dhochaayante
Thappad
Local Boy
HIT
Kannum Kannum Kollaiyadithaa...
The Invisible Man
Shubh Mangal Zyada Saavdhan
Bheeshma
Bhoot - Part One: The Haunte...
Fantasy Island
Contemporary Reviews
The Marine
Balu
10th Class
Oke Okkadu
Pirates Of The Caribbean - A...
more
Red - The Dark Side
Perfect Stranger
Takkari Donga
Bheja Fry
Double Cross
Water
The Departed
Samanyudu
Maharadhi
Random Reviews
Annala Rajyam
The Mummy Returns (Hindi)
Matrix Reloaded (Hindi)
Krishnarjuna
7 G Brindavan Colony
more
Ek Vivaah Aisa Bhi
Yuganiki Okkadu
Anukshanam
Mr. Nookayya
Badshah (Telugu)
Pompeii (Hindi)
Baby (2015)
Gentleman (2016)
Detective
X-Men: Dark Phoenix (Hindi)
SEARCH MOVIES
Dissatisfied with the results? Report a problem or error, or add a listing.
ADVERTISEMENT
SHOUTBOX!
{{todo.name}}
{{todo.date}}
[
ip{{todo.ip}}
]
{{ todo.summary }}... expand »
{{ todo.text }} « collapse
First  |  Prev  |   1   2  3  {{current_page-1}}  {{current_page}}  {{current_page+1}}  {{last_page-2}}  {{last_page-1}}  {{last_page}}   |  Next  |  Last
{{todos[0].name}}

ADVERTISEMENT
This page was tagged for
bhumika chwala tere naam unseen
tere naam film ka photo
tere naam movie review hindi
salman khan in tere naam
tere naam reviews
Follow @fullhyderabad
Follow fullhyd.com on
About Hyderabad
The Hyderabad Community
Improve fullhyd.com
More
Our Other Local Guides
Our other sites
© Copyright 1999-2009 LRR Technologies (Hyderabad), Pvt Ltd. All rights reserved. fullhyd, fullhyderabad, Welcome To The Neighbourhood are trademarks of LRR Technologies (Hyderabad) Pvt Ltd. The textual, graphic, audio and audiovisual material in this site is protected by copyright law. You may not copy, distribute, or use this material except as necessary for your personal, non-commercial use. Any trademarks are the properties of their respective owners. More on Hyderabad, India. Jobs in Hyderabad.