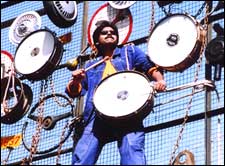 EDITOR RATING
6.0
Performances
Script
Music/Soundtrack
Visuals
NA
NA
NA
NA
Suggestions
Can watch again
NA
Good for kids
NA
Good for dates
NA
Wait for OTT
NA
What do people go to a Pavan Kalyan film for? Flamboyant production values, self-worthy music, jaw-cleching stunt-sequences, and strictly nothing else. Balu comes built-in with all these. At least in one half. Half a movie is mostly enough, and so, after 3 years of unsuccessfully trying to disprove the law of averages, Pavan Kalyan finally has a much-needed success in Balu.

Mahankali Market is a neighbourhood terrorized by Nayudamma (Jersey Singh). In here dramatically steps street-smart Balu (Pavan Kalyan), a man who looks like he has a flashback and is going to give it to you. He spends the first half implacably experimenting with comedy, with a mission to do his best to act funny and leave the results to God. In the process he wins the heart of Sweta (Shriya), in a soulless romance characterized by end-to-end creative bankruptcy.

As the film reels in, it shows more facets to Balu, like his single-minded dedication to overthrowing Nayudamma, his mysterious health problem, his apathy for love and his disastrous dress sense (those khakis-cum-cargoes-cum-Jeans-cum-whatever - just what was he wearing in front of so many people?).

Anyway, Balu skunks Nayudamma to reacquire the Mahankali Market deeds for their rightful owners, but has an accident and lands in bed. It's time for the flashback, narrated by his mother Rajeswari (Jayasudha).

Balu is actually Guni, a 100% ethics-free hitman for Khan (Gulshan Grover), Delhi's big underworld don. One day he sees Indira (Neha Oberoi), a brilliant but flaky medical student, attempting suicide, and sermonizes her on being brave and taking on life. Indira takes this literally and turns over a complete new leaf, and idolizes and eventually falls in love with the reclusive Guni.

A situation arises when Khan asks Guni to murder Indira for being a tad too brave, but Balu commits the 101 error for a crime professional by getting involved with a damsel-in-distress, and so has to turn renegade to protect Indira. But she is killed nevertheless, and now Balu is in Hyderabad trying to fulfill Indira's last wish, which is giving ownership Mahankali Market to its poor dwellers.

The climax serves up a booby-trapped marketplace that requires you to be completely involved, since if you aren't you'll start to think logic. Yet, the 2nd half is on the whole quite palatable, thanks to some rare actual acting by a heroine in a Telugu film movie, in the form of Neha Oberoi. The debutante is easily the best performer in the film, and is either really good for a first-timer or we have significantly lowered our standards and are easily impressed.

Appreciating the first half requires you to be a total Pavan Kalyan fan, since there is too much to ignore and forgive. Shriya does what she can in an ill-conceived rich-spoilt-brat role that you've seen upwards of 21,729 times, but ends up just looking good. The film picks up in the second half due to the indifferent superhero - awe-struck teen girl routine. Brahmanandam, Dharmavarapu Subrahmanyam and M S Narayana all have completely uninspired roles.

The music is on the whole good, with the Inthe Inthinthe song particularly hummable, and the background score deserving a mention. The dances are well-choreographed, and Pavan Kalyan matches up. The stunts are neat, too, as are some dialogues in the second half ("Neeku Guni Telusa?"). On the whole, passable fare, worth a visit.
Share. Save. Connect.
Tweet
BALU SNAPSHOT

RATING
6
Rrr on 22nd Sep 2005, 11:20am | Permalink
it is an excellent movie with thrilling stunts.costumes r highlight of the film
RATING
10
Haresh Potluri on 22nd Jun 2005, 3:07am | Permalink
it is excellent picture. the way pavan dressed was really superb. no one else can do this character

dance in first song was highlight of the movie.

And who the hell wrote this bad review here??? For gods sake, please get some real movie fans/critics to write the reviews. This guy/girl seems to have been submerged in the tasteless sarcasm, rather than actually writing about the film. DOnt be a blind PK critic. this is what i hate about FH people, they r blind Chiru Fans, and totally against PK. Very prjudiced they are... Please change for God's Sake.

ADVERTISEMENT
This page was tagged for
balu movie review
Balu telugu movie
Balu reviews
release date
Pavan Kalyan, Neha Oberoi
Follow @fullhyderabad
Follow fullhyd.com on
About Hyderabad
The Hyderabad Community
Improve fullhyd.com
More
Our Other Local Guides
Our other sites
© Copyright 1999-2009 LRR Technologies (Hyderabad), Pvt Ltd. All rights reserved. fullhyd, fullhyderabad, Welcome To The Neighbourhood are trademarks of LRR Technologies (Hyderabad) Pvt Ltd. The textual, graphic, audio and audiovisual material in this site is protected by copyright law. You may not copy, distribute, or use this material except as necessary for your personal, non-commercial use. Any trademarks are the properties of their respective owners. More on Hyderabad, India. Jobs in Hyderabad.