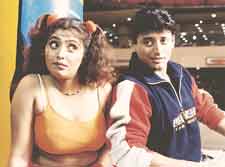 Kiran Nadella / fullhyd.com
EDITOR RATING
3.0
Performances
Script
Music/Soundtrack
Visuals
NA
NA
NA
NA
Suggestions
Can watch again
NA
Good for kids
NA
Good for dates
NA
Wait to rent it
NA
What makes Chocolate difficult to watch is the fact that you can see exactly how the story was designed around the "the theme", which was basically to make a movie. A sequence of staged situations that somehow connect together jokes and ideas culled from the boys' bathroom at an arts college is what this small time (Tamil) moviemaker's modus operandi is in a nutshell, and criticizing him for the very thing he thrives on would seem to make little sense.

Still, the tale goes like this: Arvind (Prashant) is the hero of two colleges - VOC College and Bharathi College. No, he is not attempting a dual degree - it is just that the students of both colleges are so casual that they attend any college of their choice... now that's what I call true emancipation!

Some goons come into the VOC college campus and try to rough up a student. Arvind beats them black and blue, and then quite appropriately there is a song. Now enter Anjali (Jaya Chandran). She enters the screen with Urmila's "Kambaqt Ishq" in the background, dressed like Urmila in Rangeela, and looking like Urmila's mom in real life (I am still wondering who chose her Miss Goa).

Arvind meets Anjali and falls head over heels for her, and vice versa. And since all nice things need to come to an end, they split 'cos Anjali accuses Arvind of misbehaving with Nirmala alias Nimmi (Mumtaz).

To add to the story, Suha (Suhasini), Anjali's psycho mom estranged from her husband, is making arrangements to get her daughter married to a software engineer settled in London. She begs and convinces Arvind not to marry Anjali, reminding him of his poor economical status. Arvind, like any normal dumbo, agrees, but to boldly go where no dumbo has gone before, even agrees to help in the arrangements for the marriage. A day before the wedding, though, Suha doubts Arvind's sincerity, and poisons him to get rid of him.

The songs are average, but that is without including the lyrics in the calculation. The latter are either incomprehensible or raunchy or worse. And as far as the humor in the flick is concerned, it's easier to die laughing at the sight of a doorknob.

The film makes you wince so hard and so continuously that the muscles in your face might be impaired forever. For instance, there's this scene where Prashant narrates an analogy between a pair of people and a pair of chappals to convince Suhasini to go back to her husband - it gives reuniting a bad name. What beats me is, I am a reviewer, but why were there other people sitting till the end?
Share. Save. Connect.
Tweet
CHOCOLATE (TELUGU) SNAPSHOT

ADVERTISEMENT
This page was tagged for
Chocolate (Telugu) telugu movie
Chocolate (Telugu) reviews
release date
Prashant, Jaya Chandran
theatres list
Follow @fullhyderabad
Follow fullhyd.com on
About Hyderabad
The Hyderabad Community
Improve fullhyd.com
More
Our Other Local Guides
Our other sites
© Copyright 1999-2009 LRR Technologies (Hyderabad), Pvt Ltd. All rights reserved. fullhyd, fullhyderabad, Welcome To The Neighbourhood are trademarks of LRR Technologies (Hyderabad) Pvt Ltd. The textual, graphic, audio and audiovisual material in this site is protected by copyright law. You may not copy, distribute, or use this material except as necessary for your personal, non-commercial use. Any trademarks are the properties of their respective owners. More on Hyderabad, India. Jobs in Hyderabad.