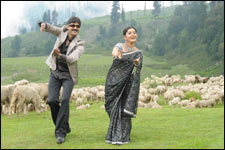 Deepa Garimella / fullhyd.com
EDITOR RATING
3.0
Performances
Script
Music/Soundtrack
Visuals
4.0
3.0
4.5
4.0
Suggestions
Can watch again
No
Good for kids
No
Good for dates
No
Wait for OTT
Yes
Hari is a junkie with enough rage to cause heat waves on Pluto. He turned out this way because he's never seen his dad, who unceremoniously ditched his unmarried mother, who then died some years later. Now Hari's going around getting doped up with ganja etc., and beating up lecturers.

His college wants to expel him, but Ravindra (Jagapathi), chairman of the board, declines to do so. He wants to reform Hari and make him top the college. A de-addiction session makes Hari behave like a bull that just saw Govinda's pants, but Ravi plods on.

Meanwhile, in a soggy romantic track, Ravi gets hitched with Meera (Meera Jasmine) when he sees her at a traffic light. Now, Meera's complaint is that Ravi keeps dashing away to attend to Hari. The last straw is when Ravi bunks his engagement to be with him.

Even Ravi's family (Jayasudha, Sonu Sood, Hema etc.) is dead against such behaviour. They don't want him, the chairman of a few dozen companies, getting so close to a wastrel. Maybe because Hari, a supporting character, is eclipsing him with his acting skills.

Now Ravi is forced to tell everyone his secret - Hari's father is none other than Ravi's deceased father. Apparently, the dying gentleman (Murali Mohan) had revealed many secrets in a VCD which he gave Ravi. At this, his mother (Jayasudha) faints. How could her husband do this? He gets away with being in a garlanded photograph and a couple of flashback scenes, whereas she is stuck with this smelly script.

However, she decides she can do nothing but join Ravi in paying for her husband's mistake. She, Ravi and her daughter (Hema) go all out to help the 'other' family in every way they can. But Ravi's elder brother (Sonu Sood) is still cheesed off at the whole thing. He just delivered an all-time blockbuster, and now, this? He makes sure Hari gets to know the murky truth, albeit in a very tasteless way.

But unlike what we expect, Sood's not the villain. Nor is Sayaji Shinde, the greedy land-grabber who uses Hari's vengeance to get at Ravi's family. The real meanies are the script-writers. They fished this one out of the 'Discarded Scripts 1976 BC' pile.

It sure beats us how a film that centres around an illegitimate family, can be a '100% Family Entertainer'. One factor could be that there's zero exposing. The elegantly draped Jayasudha and the suave Sonu Sood are the only ones who make this flick marginally watchable. It is certainly nice to see them act. And it would have been really nice to see Jagapathi and Meera act. The comedians have a few decent lines, though. Gowri Munjal has a completely forgettable role.

The washed-out songs are accompanied by some tacky visuals, but the rest of the film seems to have been made with respectable production values, what with Tollywood's regular family cast appearing after ages.

Bangaru Babu is in no way related to its title. Even if it were, were you really going to find out how?
Share. Save. Connect.
Tweet
BANGARU BABU SNAPSHOT

ADVERTISEMENT
This page was tagged for
Bangaru Babu telugu movie
Bangaru Babu reviews
release date
Jagapathi Babu, Meera Jasmine
theatres list
Follow @fullhyderabad
Follow fullhyd.com on
About Hyderabad
The Hyderabad Community
Improve fullhyd.com
More
Our Other Local Guides
Our other sites
© Copyright 1999-2009 LRR Technologies (Hyderabad), Pvt Ltd. All rights reserved. fullhyd, fullhyderabad, Welcome To The Neighbourhood are trademarks of LRR Technologies (Hyderabad) Pvt Ltd. The textual, graphic, audio and audiovisual material in this site is protected by copyright law. You may not copy, distribute, or use this material except as necessary for your personal, non-commercial use. Any trademarks are the properties of their respective owners. More on Hyderabad, India. Jobs in Hyderabad.