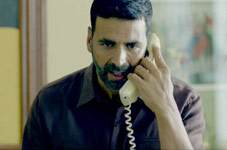 Josh / fullhyd.com
EDITOR RATING
6.5
Performances
Script
Music/Soundtrack
Visuals
8.0
6.0
6.0
8.0
Suggestions
Can watch again
Yes
Good for kids
Yes
Good for dates
Yes
Wait to rent it
No
Psychology says that the most recent part of an event is most likely to stick in memory. This makes itself evident in the movies because the movies that start off with a bang but taper off gradually are far less likely to be evaluated favourably as opposed to movies which have dull beginnings but take off eventually. Airlift is one of the latter. It has a sadly unimpactful first half but hey, it takes off after that. And in some ways, it soars.

Touted to be based on real-life incidents, Airlift follows the efforts of Kuwaiti Indian Ranjit Katiyal (Akshay Kumar) trying to arrange the exodus of about 1,70,000 Indians from Kuwait to India during the Iraqi attack on Kuwait in 1990. Air India still holds the Guinness World Record for this tremendous feat. And that is fact. The rest of the movie is largely fictional, though. Like how the actual Katiyal was not one, but two men. And Malayalis at that. Unlike the very Punjabi hero we get.

There are a number of other factual problems with the film but you don't go to the movies expecting documentaries - you want engaging cinema. And for a large part of the first half, you feel shortchanged. Not for the lack of ambition but for the lack of fulfilment of that ambition. Raja Menon doesn't seem to be half the director he wants to be.

Atmosphere is crucial for disaster films - you have got to feel the bite. The tension has to pervade the frames, the score, and the action. But in Airlift it doesn't. The happenings on screen essentially feel distant, and none of the disaster particularly registers. Menon seems to be trying to do a Neeraj Pandey (of Special 26 and Baby) but with little of his results.

The film isn't without effort, though. There's a nice bit of cinematography when Katiyal is driving through the war-ravaged streets, and the camera (from within the car) does a panorama of what's happening outside and lands on Akshay Kumar's weeping face. The weeping gets to you and the shot is well done, but what happens outside the car is quite amateurly played out (the junior artistes are inexperienced and very under-directed).

But this underwhelming stops after a while. The movie stops trying to establish the disaster atmosphere and focuses on the human element. We now see the efforts to help the refugees, the complications involved, and the resolutions obtained. And this is where the drama begins. The stakes become clear and you are now involved.

Akshay Kumar is excellent. The man, the star and the actor - all three facets of him. For a star used to churning out hits off the most inane flicks, he is man enough to sometimes pick up these offbeat scripts and unleash the actor within him. He is the only thing that works in the first half of Airlift (Nimrat Kaur ably supports but doesn't lead). The hero he plays isn't bashing anybody up, is often weeping, and feels demotivated sometimes, but still keeps doing what he's got to do.

Raja Menon's script team comes up with some nice human touches, and almost all of those are executed very well. The supporting cast rises to the occasion, and there are some exceptional performances (Kumud Mishra and Prakash Belawadi in particular).

The film signs off with a heart-tugging patriotic feeling. Suddenly it feels so right - you forgive (and possibly forget) the first half and walk away feeling light-headed. It's a splendid feeling to love one's country and it's even better to love it without having to hate anyone. That is perhaps the biggest achievement for Airlift.

For an audience used to templates, formulae and stereotypes, it is interesting to see a hero who isn't about landing blows on the enemy but about taking blow after blow and still trudging on. It is even more interesting where patriotism isn't about hating someone with a passion but loving our own people and doing something, anything, for them.
Share. Save. Connect.
Tweet
AIRLIFT SNAPSHOT 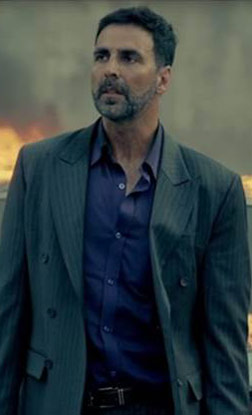 See Airlift full details
AIRLIFT USER REVIEWS
1 - 2 OF 2 COMMENTS
POSITIVE  |  NEGATIVE |  NEWEST  |  OLDEST  |  MOST HELPFUL  |  LEAST HELPFUL
Rajiv hari om bhatia on 25th Jan 2016, 6:23pm | Permalink
No disrespect...but i feel your comment on prakash being excellent is not true in my opinion...he was very annoying....so was the guy playing the iraqi general....but kumud was really good
Josh on 25th Jan 2016, 9:25pm | Permalink
Well, the point of Prakash's character was to be annoying, wasn't it? Your annoyance is perhaps a validation on some level. Or I might be biased because of his superb presence in Talwar. And Imanulhaq was plain miscast.

ADVERTISEMENT
This page was tagged for
Airlift hindi movie
Airlift reviews
release date
Akshay Kumar, Nimrat Kaur
theatres list
Follow @fullhyderabad
Follow fullhyd.com on
About Hyderabad
The Hyderabad Community
Improve fullhyd.com
More
Our Other Local Guides
Our other sites
© Copyright 1999-2009 LRR Technologies (Hyderabad), Pvt Ltd. All rights reserved. fullhyd, fullhyderabad, Welcome To The Neighbourhood are trademarks of LRR Technologies (Hyderabad) Pvt Ltd. The textual, graphic, audio and audiovisual material in this site is protected by copyright law. You may not copy, distribute, or use this material except as necessary for your personal, non-commercial use. Any trademarks are the properties of their respective owners. More on Hyderabad, India. Jobs in Hyderabad.