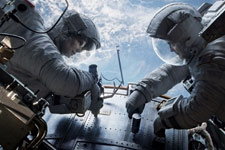 A slow hum originates from within relentless emptiness. It gathers into a rumble. It expands, seemingly aeonian. Until, it explodes into... nothing.

As you process the mind-bending silence, the jewel tones of the rock we call home fill your range of vision, and the silence is cut through by the sound of banter - human, even though the POV seems to be that of an invisible alien with a hidden cam.

Then, as you process this intrusion into your brain's me-time, you spot the source of the banter as being newbie astronaut Dr. Ryan Stone (Sandra Bullock), giddy veteran on his final spacewalk Matt Kowalski (George Clooney), and a smart alec at Mission Control, Houston (referred to as 'Houston'). They talk about vomit, blue eyes vs. brown, zero gravity - just strangers getting to know each other.

And then, Kowalski utters these words: "Houston, I have a bad feeling about this mission."

Oh, come on. You know what's coming next. With those words, he practically inscribed the prediction of disaster in a cryptic stone calendar 6,000 years ago.

Long story short, the Russians do something stupid, thus causing a cataclysmic chain reaction of satellite debris to go hurtling round the planet, which eventually leads to one of the most terrifyingly fantastic visuals you will ever see in your life - that of Stone hurtling into space, alone, un-tethered.

The thing about space is, there is no way to stop unless you apply force, which is the exact opposite of how things work under the influence of gravity. This is the scene where you'll first notice the sheer genius of shifting POVs. Here, the camera is a distant observer who is at once petrified and fascinated by the spectacle of Stone spinning endlessly into endlessness (endlessness is a big theme in the movie - as they say, it's not over until it's over).

Within the blink of an eye, you are now Stone, and your barrier of detached awe is now a bunch of useless splinters floating aimlessly as you force your brain to take stock of the horror unfolding around you.

When Kowalski finally catches up to you, you are determined to hold on no matter what the cost. You have experienced what it means to fall into an abyss, and you do not want to go there again, even if it means your death. Just like ad infinitum, the idea of holding on and letting go is one that constantly occurs throughout the film.

In various situations across the 90-minute-film Gravity, Stone holds onto and lets go of her fears, her stability, various floating objects, her regrets, and, at one point, life.

As do you, the viewer, because this movie refuses to let you take on the inactive role of a spectator (this might have to do something with the fact that you'll have to keep fighting the impulse to duck every time you see a piece of metal shooting towards you). The shifting perspectives take care of that. You could find yourself being the alien spy one minute, Stone the next, a reality TV viewer after, and even an escape pod during a particularly disorienting sequence.

And that, dear readers, is the catch. Gravity is a film as exhausting as it is exhilarating. It is as totally immersive as a really well-designed RPG. It is also just as skimpily plotted. About the third time Bullock has to escape somewhere safe because something went ridiculously wrong, your schizophrenified mind is vacillating between thinking she's either the luckiest woman on the planet, or the unluckiest.

On this 0-G ride, everything that can possibly go wrong, goes wrong. And, while the cinematography does everything right, what come in the way of your eventually connecting with the leads are the ridiculously campy dialogue and character sketches. The moment you realize that the plot is mostly a tool for the makers to display all the truly amazing things they can do with their computers is when the disenchantment begins.

Just like Stone who gets over her feeling of powerlessness after above incident, we too found the strength to unite the voices in our head long enough to notice that, no, "My father wanted a boy" is not a particularly original way of explaining away the heroine's manly first name (Ryan, for those who are too lazy to scroll all the way back up), and the daddy issues it entails.

Stone's character has two dimensions less than the film's fantastically rendered three. Since the character is that of a strong female lead, and since it is played by Sandra Bullock, it of course must be a lonely, high-powered career woman whose only thought during several possible last minutes is the fact that there will be no one back home to pray for her.

Don't get us wrong. Bullock is a fantastic actor. She's done so much with just silences, whimpering and the play of expressions on her face that we can't help but wish that she had something worthwhile to say when she actually spoke.

George Clooney, who plays the only other alive person in the film, is cheesy, goofy, charming and slightly irritating (think "every rom-com he's ever been in").

Please note: None of the above is an attempt to undermine the gravity of Gravity (in our defense, the pun was standing on the curb, drunk and waiting to be picked up). This is a film that refuses to be trivialized by the sheer force of its CGI will, just as it refuses to let you think long enough for you to even attempt to do so (that only comes after you go home).

In fact, the movie makes it redundant to talk about computer graphics as being separate from its other aspects. Reportedly, they constitute of 90% of the film. The epic scale of computerized imagery is humbling. It supersedes even the performances. In one scene where you find Bullock tearing up in the comfort of a space station cabin, it is individual teardrops flowing off of her face that really bring home the sense of desolation, rather than the look on her face or her fetal body language.

Which brings us to our second biggest gripe. The film belongs to the science-fiction genre, which essentially means that immensely talented director Alfonso Cuaron actually wrote the story. This is the same man who made the intricate 2006 movie Children Of Men, and brought to delightful life the novel A Little Princess.

He could've written anystory to display the kind of imagery he painstakingly spent 5 years creating. He could've spent a little while longer to make this story something other than a debris-dodging survivalist video game, which, though brilliantly made, lacks the depth projected by its packaging.

P. S. Ignore the drama. Go shell out whatever it takes to watch this wonder in 3D. This writer even managed to flick a pair of glasses for herself.

P. P. S. fullhyd.com does not condone theft, no matter how lax the theatre personnel are or how well the glasses go with your outfit.
Share. Save. Connect.
Tweet
GRAVITY SNAPSHOT 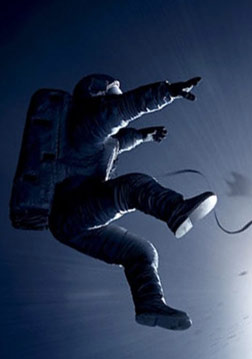 ADVERTISEMENT
This page was tagged for
Gravity english movie
Gravity reviews
release date
Sandra Bullock, George Clooney
theatres list
Follow @fullhyderabad
Follow fullhyd.com on
About Hyderabad
The Hyderabad Community
Improve fullhyd.com
More
Our Other Local Guides
Our other sites
© Copyright 1999-2009 LRR Technologies (Hyderabad), Pvt Ltd. All rights reserved. fullhyd, fullhyderabad, Welcome To The Neighbourhood are trademarks of LRR Technologies (Hyderabad) Pvt Ltd. The textual, graphic, audio and audiovisual material in this site is protected by copyright law. You may not copy, distribute, or use this material except as necessary for your personal, non-commercial use. Any trademarks are the properties of their respective owners. More on Hyderabad, India. Jobs in Hyderabad.