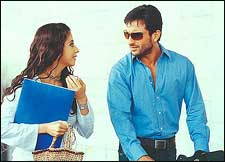 Mithun Verma / fullhyd.com
EDITOR RATING
7.5
Performances
Script
Music/Soundtrack
Visuals
NA
NA
NA
NA
Suggestions
Can watch again
NA
Good for kids
NA
Good for dates
NA
Wait to rent it
NA
If Tomorrow Comes is considered one of the best works of Sheldon by millions of people. Those millions also consider every other work of his to be one of the best. Being friends with one such person, it was hard not to notice the similarity of the plots of Ek Hasina Thi and If Tomorrow Comes.

Maybe they're not Siamese identical, but they're identical nonetheless. Sarika Vartak (Urmila) is a travel agent who's fending off the strong moves of the suave Karan Rathod (Saif Ali Khan). Karan appears to be a professional Casanova, and Sarika just reels helplessly into his colossal charm. That's when the real movie begins.

From a slick urban love story, Ek Hasina Thi turns drastically into a twisted, up-ended tale of a bewildering and claustrophobic web of malevolence. A friend of Karan's turns out to be a dreaded criminal wanted for various atrocities. The fact that he had left his suitcase at Sarika's place lands her up in deep trouble.

She's tried and convicted as being an accomplice to all the crimes. Karan begs with her not to reveal his connection, as his life would be ruined. Like an obedient Indian naari, she obliges. After all, he even promises to get her off in a couple of weeks if she confesses to her crimes, as the judge (he says) is on his side. She confesses, only find out of horror that Karan was setting her up all the time.

The self-pity of Sarika dies a gruesome death in the prison (If Tomorrow Comes). Her encounters with the butch bully dykes and their treatment of this new "corner bitch" makes her fearless even to the most feared conditions of all - namely, rats.

Having lost all fear of hairy rodents, she's set to take revenge on Karan, who is a sleazier species than that. She gets all the help she needs from a kingmaker in prison who, for some bizarre reason, takes a liking to Sarika. So much so that she arranges five-star accommodation for her outside. As they say, having a killer body never hurt anyone.

The rest of the story is the vengeance tale of the woman scorned who thoroughly gets her share of settling the scores.

That's the plot. Just don't yawn with a knowing derision born of such familiar plot devices (Khoon Bhari Maang, Double Jeopardy etc). It'll only allow the director to stuff and gag you with his fiendishly unsettling take on the predictable.

Every scene of the movie is shot evocatively. The lavish use of blood and gunshots make the movie dark rather than gory. The violent ease with which bodies are splattered everywhere shows how dangerous and ugly it can get when one gets in the way of hardcore gagsters.

Urmila as the subtle-young girl-turned-vixen is very convincing. Seema Biswas plays the thankless police officer following the case of Sarika and Karan from the beginning. She gets a bullet for all her efforts.

But the movie is fantastic for 3 reasons:

He's the reason that makes Ek Haseena Thi ride above the excuse of being a skin crawler mood piece. His boyish charm fused unabashedly into his icy cool attitude, coupled with merciless brutality, makes you wonder why he isn't a Bollywood badshah already.

The only parts of the movie that are not convincing are the sudden transformation of a typical Indian naari into a heartless maniac, and the convenience with which she's handed over Karan's neck in a plate. Her transformation is a key issue, and not dealing with it properly affects the outcome of the entire movie.

ADVERTISEMENT
This page was tagged for
Ek Hasina Thi hindi movie
Ek Hasina Thi reviews
release date
Saif Ali Khan, Urmila Matondkar
theatres list
Follow @fullhyderabad
Follow fullhyd.com on
About Hyderabad
The Hyderabad Community
Improve fullhyd.com
More
Our Other Local Guides
Our other sites
© Copyright 1999-2009 LRR Technologies (Hyderabad), Pvt Ltd. All rights reserved. fullhyd, fullhyderabad, Welcome To The Neighbourhood are trademarks of LRR Technologies (Hyderabad) Pvt Ltd. The textual, graphic, audio and audiovisual material in this site is protected by copyright law. You may not copy, distribute, or use this material except as necessary for your personal, non-commercial use. Any trademarks are the properties of their respective owners. More on Hyderabad, India. Jobs in Hyderabad.