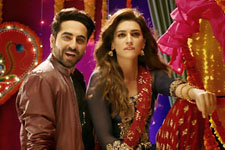 T J Reddy / fullhyd.com
EDITOR RATING
4.5
Performances
Script
Music/Soundtrack
Visuals
7.0
4.0
3.0
5.0
Suggestions
Can watch again
No
Good for kids
No
Good for dates
No
Wait for OTT
Yes
Ah, the joys of watching a film without any expectations to be met. I walked into Ashwini Iyer Tiwari's sophomore effort Bareilly Ki Barfi with little to no anticipation. I have not seen the director's first effort Nil Battey Sannata even though it was quite the acclaimed work. Ayushmann Khurrana and Rajkummar Rao have both flattered to deceive so far as they doled out great performances in mostly forgettable to mediocre films. Kriti Sanon is quite the untested commodity even though she has had quite the prolific career thus far. Seeing Nitesh Tiwari (Dangal) hold one of the writing credits, Pankaj Tripathi on the cast and Javed Akthar on narration were the only few blips of the film which piqued my interest.

With a crystal clear mind which was as open and perceptive as can be, I sat myself down to watch a movie seemingly about the woman who is Mr. Mishra's son and Mrs. Mishra's daughter, Bitti (Sanon). Living in Bareilly, Bitti is the one free-spirited girl who comes clad in hipster-traditional Indian clothing, who is armed to the brim with zingers, and whose parents are on the lookout for a suitable groom. In comes relatively recently heartbroken Chirag (Khurrana) who falls in "Bollywood" love with Bitti.

Bitti, however, has her heart set on meeting the author of her favorite book Bareilly Ki Barfi, Pritam Vidrohi. Little does she know that Chirag is the author. Chirag being who he is, enlists the help of the timid chota-shehri Rajkummar Rao to play a crass version of Vidrohi so that Bitti would end up hating him and come running into his (Chirag's) loving arms.

Most of you who have watched more than a sum total of five Bollywood romances would check off the plot beats and clichéd elements plaguing this film, and you would not be wholly wrong in doing so. While the film starts off with a fresh take on character introductions, with a large chunk of time devoted to Bitti, it quickly devolves into the tried and tested. With brilliantly unoriginal character sequences comprising of Bitti smoking or drinking or cursing serving as ill-advised character development, the film quickly winks at the audience to show them that this cinematic experience is not one to border on the path-breaking.

Rest assured, I am not against females indulging in any of these acts. But many a film has used these actions (while writing nothing else that qualifies as clever) to justify free-spirited characters, and I lead the line of those souls who believe that these sequences act more as crutches for writers than illustrate their knowledge of the modern woman.

With a tidy runtime of 2 hours and 3 minutes, the movie gives itself no room to genuinely develop its characters and their arcs. A slightly sluggish first half leads to the plot-heavy second half where every major plot point commences with a contrivance and ends with a logical loophole. The film tries to serve you extremely old wine in spanking new bottles hoping you won't notice that the fermenting on said wine did not give it the great regal taste the filmmakers had hoped for.

The pretty and personable bottles Sanon, Khuranna and Rao try their hardest to make a movie riddled with clichés palatable to the audience. Rajkummar Rao, who many would categorize as a young Nawazuddin Siddiqui, arrives to the plot proper late, yet arrives the hardest. His magnetic presence that draws your eyes and attention to him whether he is the loudmouth or the faux Vidrohi portrayed as timid (sometimes both versions in the same shot) is a testament to the man's talent as a performer. While neither his nor his co-stars' characters have any gravitas whatsoever, they never stop trying to create three-dimensional characters out of one-dimensional writing and uninspired direction.

With Pankaj Tripathi and Seema Bhargava on the supporting cast, the movie is not entirely unwatchable. The two senior character actors infuse the film with a genuine sense of homeliness, warmth and, most importantly, light-heartedness. However, going against these actors' paramount efforts is everything else surrounding them. A distinctly Bollywood visual palette which makes the film unidentifiable among the host of romantic comedies Bollywood douses filmgoers with every year, and a host of misplaced songs and tepid scenes which try to wring emotion out of thin air, of which there are many, undercut any and all messages of empowerment and sense of depth the film may have had.

Through all these pitfalls, the film works as the perfect cure for a lazy weekend afternoon. A walk to your nearest multiplex with a few people you enjoy watching films with could give you a few laughs and a feeling of your paisa being vasooled. As a work of art, however, this one struggles to get anywhere lower than its dry crust.
Share. Save. Connect.
Tweet
BAREILLY KI BARFI SNAPSHOT

ADVERTISEMENT
This page was tagged for
bareilly ki barfi 2 movie in hindi
Bareilly Ki Barfi hindi movie
Bareilly Ki Barfi reviews
release date
Ayushmann Khurrana, Kriti Sanon
Follow @fullhyderabad
Follow fullhyd.com on
About Hyderabad
The Hyderabad Community
Improve fullhyd.com
More
Our Other Local Guides
Our other sites
© Copyright 1999-2009 LRR Technologies (Hyderabad), Pvt Ltd. All rights reserved. fullhyd, fullhyderabad, Welcome To The Neighbourhood are trademarks of LRR Technologies (Hyderabad) Pvt Ltd. The textual, graphic, audio and audiovisual material in this site is protected by copyright law. You may not copy, distribute, or use this material except as necessary for your personal, non-commercial use. Any trademarks are the properties of their respective owners. More on Hyderabad, India. Jobs in Hyderabad.