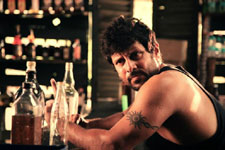 Ravi Kandala / fullhyd.com
EDITOR RATING
5.0
Performances
Script
Music/Soundtrack
Visuals
7.0
5.0
5.0
7.0
Suggestions
Can watch again
No
Good for kids
No
Good for dates
No
Wait for OTT
Yes
Indulgence is often not a good thing. Indulgence in small measures can sometimes be forgiven, but indulgence in large measures causes a pain in the wrong places.

David is a film that chronicles the lives of three people named David who lived in three different time periods. The idea of telling the stories of three different people living in different time periods facing different problems, and then finally bringing the stories together, is definitely fascinating. The three Davids, the problems that they face with their fathers and the society around them are all finely written with a great amount of detail, but it is this detail that starts hampering the film after a while.

The first David in the flick, played by Neil Nitin Mukesh, lives in London in 1975, and is fiercely loyal to Iqbal Ghani, a mob boss and his godfather. His story deals with the prickly relationship he has with Ghani, and the reasons that force him to turn against the man. There is also the sub-plot of his love story with Noor (Monica Dogra).

The second David, played by Vinay Virmani, lives in Mumbai in 1999. He is a struggling musician who is in search of his "one big break". This part of the film chronicles David's struggles for success, and his love-hate relationship with his father, Noel (Nasser) and his two sisters (Sheetal Menon, Shweta Pandit).

The third David, played by Vikram, is a fisherman living in Goa in 2010. This segment deals with his stoned "relationship" with his long-deceased father (Saurabh Shukla), his easy friendship with Frenny (Tabu) and his one-sided love story with Roma (Isha Sharvani).

Bejoy Nambiar has written the film in loving detail, and it was shot by his three cinematographers (R Rathnavelu, P S Vinod and Sanu Varghese) with great care. The frames are all stunning, and they are mostly created minus trickery (read: CG). The movie gives you some great lines, none better than the one comparing God and Dharmyudhs to brands of underwear that are cool (Jockey) and uncool (Rupa).

The music of the film is good, and the background score is even better. Bejoy Nambiar retains his knack of staging stunning action sequences with soft numbers playing in the background. The black-and-white segment, especially, has some brilliantly choreographed scenes that look and sound violent.

However, all these well-written characters, good music, great visuals and performances and stunning action sequences fail to make a good movie, the chief culprit being the length of the movie. David rambles on for close to three hours, and keeps running back and forth amongst the different stories, often losing focus.

Three stories of forty minutes each, with a ten-minute climax tying them together, was all the film probably needed. In establishing and re-establishing and re-re-establishing characters and their motives, David runs on for so long that the audience, never-mind the characters, start yearning for closure. Bejoy Nambiar's indulgence in his stories is the sign of a brave filmmaker, but not necessarily a successful one.

Acting-wise, David has superior performances by each and every actor in the film. Be it the three male leads; the supporting characters played by established actors like Nasser, Saurabh Shukla, Tabu, Rohini Hattangadi (brilliant in a scene in a lift); or the leading ladies, the film is spot on in its casting, and will surely occupy a place of pride on each actor's CV.

David is a film that will leave you frustrated just thinking of the infinite possibilities it evokes. A shorter, snappier version of the film would definitely have made for an engrossing movie that could have cocked a snook at conventional story-telling while giving us three very good stories at one go.
Share. Save. Connect.
Tweet
DAVID SNAPSHOT 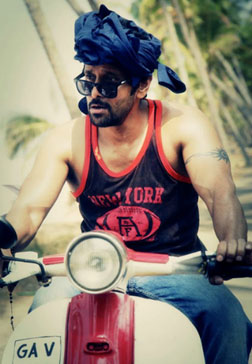 ADVERTISEMENT
This page was tagged for
David hindi movie
David reviews
release date
Neil Nitin Mukesh, Chiyaan Vikram
theatres list
Follow @fullhyderabad
Follow fullhyd.com on
About Hyderabad
The Hyderabad Community
Improve fullhyd.com
More
Our Other Local Guides
Our other sites
© Copyright 1999-2009 LRR Technologies (Hyderabad), Pvt Ltd. All rights reserved. fullhyd, fullhyderabad, Welcome To The Neighbourhood are trademarks of LRR Technologies (Hyderabad) Pvt Ltd. The textual, graphic, audio and audiovisual material in this site is protected by copyright law. You may not copy, distribute, or use this material except as necessary for your personal, non-commercial use. Any trademarks are the properties of their respective owners. More on Hyderabad, India. Jobs in Hyderabad.