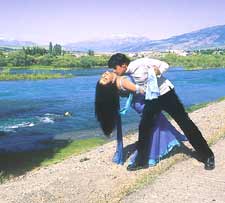 Smriti Kashyap / fullhyd.com
EDITOR RATING
3.0
Performances
Script
Music/Soundtrack
Visuals
NA
NA
NA
NA
Suggestions
Can watch again
NA
Good for kids
NA
Good for dates
NA
Wait to rent it
NA
It's usually a great kick for audiences to bang the gavel down and pronounce wickedly the absolute failure of two twinkling minims who are making their debut, but unfortunately the ones here seem to have stolen a march over us and have gone ahead and proclaimed themselves that!

Then, there's the script, too. The whole of Yeh Mohabbat Hai seems to have written by someone who's been commissioned a grant by Stanford's creative writing department to ferret deep into the abyss of his mind and come up with the most implausible of plots for a Bollywood pot-boiler. You have to see it to believe it.

The flick starts innocently enough with the usual patati-patata about childhood friends turned lovers. Chand (Rahul Bhatt) and Shaheen (an anemic looking Akanksha who looks more like a Shah - hen than a Shaheen) are all draped about each other as they sing and serenade in the picturesque locales of their village and in several other scenic places spread across a multitude of continents. Just as the goose loves the gander, the duo are totally flipped out over each other, and before you can bat your already heavy eyelid, break rapidly into a shing-a-ling-song.

But not all is calm on the horizon, as Chand plays into he hands of crooked and conniving Shaukat (Mohnish Behl), his evil cousin who hands him a parcel of RDX. Of course, ol' Chand has no clue about this and the budding cricketer just supposes the extra heavy bag to be a bunch of willows. He lands in Mumbai, and finds himself in queer street as he innocently blows the entire place up and watches his pals being butchered to pieces. Sure enough, he gets arrested and disappears.

Back in the Himalayas, ol' faithful Shaheen is waiting impatiently for the pigeon to arrive bearing good tidings, and frets as it just doesn't show up. When the village comes to know about the incidents back at Mumbai, they get knocked down with a spoon. Over a period of some tasteless melodrama, we are soon led to the part when Shaheen decides to take her amour in her hands and like a determined fox terrier begins a 'search and rescue' task which would make several U S Marines complain about the ineffectiveness of their training methods.

Whether she manages to find Chand or not is anybody's guess, and betting starts at Rs. 1.50 and the Vegas line is 345 to 1 in favor of the gal finding the guy. Got it?

Anyway, comme-ci comme-ca movie, yaaawn acting, and the songs' medical name is Valium. Unless you want to make ducks and drakes of a crawling afternoon, there really is no logic in trying to bravely go to where no man has ever come out from undrowsy before.
Share. Save. Connect.
Tweet
YEH MOHABBAT HAI SNAPSHOT

ADVERTISEMENT
This page was tagged for
yeh mohabbat hai
Yeh Mohabbat Hai hindi movie
Yeh Mohabbat Hai reviews
release date
Rahul Bhatt, Akanksha Malhotra
Follow @fullhyderabad
Follow fullhyd.com on
About Hyderabad
The Hyderabad Community
Improve fullhyd.com
More
Our Other Local Guides
Our other sites
© Copyright 1999-2009 LRR Technologies (Hyderabad), Pvt Ltd. All rights reserved. fullhyd, fullhyderabad, Welcome To The Neighbourhood are trademarks of LRR Technologies (Hyderabad) Pvt Ltd. The textual, graphic, audio and audiovisual material in this site is protected by copyright law. You may not copy, distribute, or use this material except as necessary for your personal, non-commercial use. Any trademarks are the properties of their respective owners. More on Hyderabad, India. Jobs in Hyderabad.