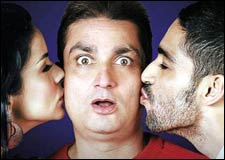 Jaiwantika Dutta-Dhupkar / fullhyd.com
EDITOR RATING
4.5
Performances
Script
Music/Soundtrack
Visuals
6.5
4.5
7.0
8.0
Suggestions
Can watch again
No
Good for kids
No
Good for dates
Yes
Wait to rent it
Yes
How does a girl steal the guy her gay friend has been bonding big-time with? Well, first she kisses him, then she robs him of his well-preserved virginity, and with that, slowly morphs him from homo to hetero. And this brilliant strategy was born from the brain-fever of Parvati Balagopalan, the maker of Rules: Pyaar Ka Superhit Formula.

Now PB, at times, shows sparks of feminist intelligence, so we're not even going to ask why she thinks nice, decent girls should let their latent evil (and Electra) show. Anyhow, in this 'Girl v/s Gay' fury over the guy, she is absolutely clear about who deserves to win. It's Love, of course. The film is hardly about badly-behaved girls, anyway. It's more about Pinu Patel's (Vinay Pathak) almost-but-not-quite sexual exploits, and how Renu's (Gul Panag) entry into his life cures him of all his "confusion".

Well, Pinu has always been desperate to get married (to any "normal", "healthy" woman) but things never quite materialize, and so his sexuality stays in a frigid state till a full-mouthed kiss from the delicately attractive Kamlesh (Anuj Chowdhury) stirs a sinful fire in his loins. Now, Pinu has a painful dilemma to address - is he gay or is he not? And what about his pretty cashier who likes caricatures and men with imperfections?

Straight pretends to root for homosexuality, but all it does is give the spectator the voyeuristic insight of the neighborhood gossip. Quaintly set in England, it has the touching small-film feel, and every now and then you can hear the filmmaker's voice sounding not unlike a pop-feminist at a college rally. Yet, at a time when female filmmakers are torn between asserting feminist rights and freely selling female sexuality for liberation, Parvati Balagopalan does a funny U-turn and has Gul play the doormat who uses sex to get what she wants, in the name of "feminism".

Indeed, for a film made by a woman, Straight is shockingly insensitive in condemning its female lead to a largely sexual role. Renu's character has very few dimensions to it, and finally manages to "get" Pinu by sleeping with him. And that is, unfortunately, the only remarkable thing she does in the entire film, however cutely desperate she seems. You also wish there were gutsier portrayals of homosexuality, female ambition, female sexuality and the Indian diaspora.

Despite Pinu being the central character, he doesn't appeal as much as Kamlesh's character does. The latter has clearly been invested with time, scripting effort and a characterization which is noteworthy. And Vinay Pathak as Pinu is neither convincing as a homosexual nor capable of inspiring awe as a figure of authority. His demeanor is too ordinary, cute, even. He is still fairly good, but one suspects that has to do with the undue amount of footage he gets at the cost of his fellow-actors.

Gul Panag as Renu is a treat, and it's nice to watch a pretty lady who does not ham onscreen. Anup Choudhury as Kamlesh, Pinu's cook and stand-up comedian, is the best of the lot. He delivers a sterling performance, one that is at once power-packed yet controlled, and displays considerable mastery over his skill.

The film is well-scripted, with brilliant sequencing of events that keeps the viewer hooked. It also has some pleasant music which fits in with the mood and the moment. The editing is slick and contributes to the overall pace, so there isn't a moment when the film drags, except towards the end, which could've been handled more sensitively.

And finally, oh no, this isn't just another flick about love. It gauges sexual frustration and puts forth some mind-blowing theories to enrich the universe. Like, "Sexual frustration can cause you to discover the hidden homosexual in you," for one. Watch and learn. And tell your gay friends it's Parvati Balagopalan's fault.
Share. Save. Connect.
Tweet
STRAIGHT SNAPSHOT

See Straight full details
STRAIGHT USER REVIEWS
1 - 1 OF 1 COMMENTS
POSITIVE  |  NEGATIVE |  NEWEST  |  OLDEST  |  MOST HELPFUL  |  LEAST HELPFUL
estate number 4 on 26th Mar 2009, 1:21pm | Permalink
Nice language. I haven't watched the film. However, this review left me greatly confused -
1. "...Parvati Balagopalan does a funny U-turn and has Gul play the doormat who uses sex to get what she wants, in the name of "feminism"."
If this film is about Pinu's confusion, that too on his sexuality, why is the female lead expected to be powerful? Why did feminism even come into the picture?
2. Who is the pretty cashier - is it Renu?
3. Kamlesh, Pinu's stand-up comedian? How??
4. BTW, what about this Kamlesh guy? Is he gay???
Rules was a cute film. Straight, however, looks like something I'll totally avoid, going by everyone's reviews!

ADVERTISEMENT
This page was tagged for
Straight hindi movie
Straight reviews
release date
Vinay Pathak, Gul Panag
theatres list
Follow @fullhyderabad
Follow fullhyd.com on
About Hyderabad
The Hyderabad Community
Improve fullhyd.com
More
Our Other Local Guides
Our other sites
© Copyright 1999-2009 LRR Technologies (Hyderabad), Pvt Ltd. All rights reserved. fullhyd, fullhyderabad, Welcome To The Neighbourhood are trademarks of LRR Technologies (Hyderabad) Pvt Ltd. The textual, graphic, audio and audiovisual material in this site is protected by copyright law. You may not copy, distribute, or use this material except as necessary for your personal, non-commercial use. Any trademarks are the properties of their respective owners. More on Hyderabad, India. Jobs in Hyderabad.