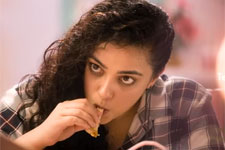 Josh / fullhyd.com
EDITOR RATING
7.0
Performances
Script
Music/Soundtrack
Visuals
7.0
8.0
8.0
9.0
Suggestions
Can watch again
Yes
Good for kids
No
Good for dates
Yes
Wait to rent it
No
Okay, maybe we were wrong. Not more than a month back, this reviewer was talking to a young and talented short filmmaker who was handed the proverbial biscuit by a producer who promised to produce his script and later went incommunicado. Having read that dreamy script, this reviewer told the poor chap, "Idi Telugulo avvadu. Hindiko, Tamilko velthe manchidi." It is with complete conviction and concern that we asserted that these new-age scripts just don't get made in Telugu.

And, apparently, that's what Kajal Aggarwal told Prasanth Varma, the director of Awe!. But the chappie, apparently, insisted that it'll be made in Telugu, and today we saw it materialize and unfold right in front of us. So, yeah, we were wrong. These films are getting made in Telugu and it's all tremendously exciting.

Awe! is a melting pot of over a dozen characters all of whom seem to have little to do with each other but nevertheless converge to a single focal point by the end. And that's about as much as we can say about the plot because practically everything is a surprise and we'd be giving away terrible spoilers if we even discussed any plot point of the movie.

So, instead of describing the plot, we'll do this strange exercise - we'll give you a meta-description of the plot by stringing together a bunch of Awe!-related keywords in alphabetical order, thereby not letting on to the significance of one keyword over another.

(Unintended humour - it's superbly tickling to read those keywords in pairs. Our favourite is homosexual injection.)

Prasanth Varma succeeds in bundling up all these seemingly arbitrary plot points into one film and not having you feel bamboozled at the end of it all. And the guy has a talent for detail which gets him some fascinating cuts (editing by Goutham Nerusu), captivating frames (photography by Karthik Ghattamaneni) and stupendous score (Mark Robin). Just the looks of its myriad characters are worked on with so much love and care (Regina, in particular, is simply transformed). There is absolutely no denying that Awe! is, technically, a great film.

But we can interpret that last line differently. When we evaluate the film in terms of the more classical concerns such as does it make you care for its characters, does it tell its story emotionally, and - that all too important Indian concern - does it entertain, we aren't entirely sure. Awe!, as we saw it, may only technically be a great film.

Of the multiple segments in the film, only two really make you care. One of them (that of Eesha Rebba) greatly benefits from Rohini's natural performance as a mouna-vratham keeping mum, and the other (that of Priyadarshi) is hugely entertaining thanks to the (voice-acting) talents of Nani and Ravi Teja.

Don't get us wrong, it isn't like the other segments bore you or anything. There's certainly much to keep you occupied, but it isn't what happens to the characters that we are interested in. It's these other things like the sketches that they begin and end with, the costumes the characters wear, the colour palette distinction and so on. It's a rich film and keeps on giving, but that isn't the same thing as telling a story that will make the viewer reminisce.

It's also a rich film in that it's about and for the rich. It's about people who visit fancy cafés where they order blueberry mojitos. It's about café waitresses who somehow have fashionable tanktops, overalls, dreadlocks, tattoos, and so much access to cocaine. It's about little girls who ask for charity for cow protection because "Indian cow breeds extinct avuthunnai" (made us wonder if there's a charity for the extinction of Telugu). And it's not for people who don't understand English.

All of that wouldn't have mattered very much if the people were dealt with more involvement. Like in Arjun Reddy, where it's evident that the protagonist is a self-obsessed rich brat but is also dealt with through rather sincere character development. The trouble with Awe! is its numerous characters get inversely-proportionally small screentimes, and fail to ground themselves into your Random Access Memory. And it doesn't help at all that all that richness and polish make them feel alien and unfamiliar.

But the big feat is it doesn't collapse like a house of cards. It isn't one of those cases where ambition fails to meet execution. Awe! stands tall as perhaps the most unusual writing/directing exercise in Telugu cinema. But you're less likely to be in awe with the film than with the fact that it got made at all.
Share. Save. Connect.
Tweet
AWE! SNAPSHOT 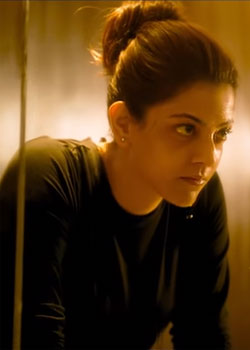 See Awe! full details
AWE! USER REVIEWS
1 - 2 OF 2 COMMENTS
POSITIVE  |  NEGATIVE |  NEWEST  |  OLDEST  |  MOST HELPFUL  |  LEAST HELPFUL
USER RATING
8.0
1 USER
Performances
Script
Music/Soundtrack
Visuals
NA
NA
NA
NA
Can watch again - NA
Good for kids - NA
Good for dates - NA
Wait to rent it - NA
Raghu M on 18th Feb 2018, 9:04am | Permalink
It's like watching Matrix or Interstellar..
you seem to be liking the movie while watching, but don't quite get it, but after coming out of the theater, you want to pretend you're part of the intellectual who understood it, and start praising the director and the producer for making such a ground breaking movie, and when your child asks to explain what he didn't understand, well, you would cover it up.. 'you need to grow up to understand it'. Still you can't really say you didn't like the movie, neither you can.
Hari on 16th Feb 2018, 9:37pm | Permalink
"made us wonder if there's a charity for the extinction of Telugu" - LOL josh. You have these little gems in all your reviews. Makes a great read every time.
Watched premier show and I liked this movie a lot. This is an important film. I doubt it will make money which is an absolute pity but the writing and passion is just amazing. Too many characters did dilute the performance part(not much for the actors to get their teeth into) but writing is the winner here. Best part is, the makers did not attempt to explain things which many telugu film makers are guilty of. I was disappointed many fellow audience members here became restless and just wanted a simple narration. Simple minded films are dime a dozen. Let's accept these off beat films once in a while. We need to thank nani and prashanthi for sinking money into a project that may just eat it. But I do hope there will be producers that trust films as art form and are willing to lose money to make good movies (I mean ultra rich producers should do this atleast as charity towards performing art). Here's hoping.

ADVERTISEMENT
This page was tagged for
Awe! telugu movie
Awe! reviews
release date
Kajal Aggarwal, Nithya Menen
theatres list
Follow @fullhyderabad
Follow fullhyd.com on
About Hyderabad
The Hyderabad Community
Improve fullhyd.com
More
Our Other Local Guides
Our other sites
© Copyright 1999-2009 LRR Technologies (Hyderabad), Pvt Ltd. All rights reserved. fullhyd, fullhyderabad, Welcome To The Neighbourhood are trademarks of LRR Technologies (Hyderabad) Pvt Ltd. The textual, graphic, audio and audiovisual material in this site is protected by copyright law. You may not copy, distribute, or use this material except as necessary for your personal, non-commercial use. Any trademarks are the properties of their respective owners. More on Hyderabad, India. Jobs in Hyderabad.