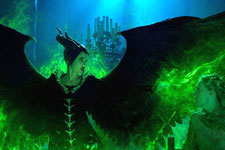 Punarvasu Pendse / fullhyd.com
EDITOR RATING
4.5
Performances
Script
Music/Soundtrack
Visuals
6.0
3.0
5.0
4.0
Suggestions
Can watch again
No
Good for kids
No
Good for dates
Yes
Wait to rent it
Yes
This week is the tale of sequels which released a fairly long while after the originals. But that is where the similarities between Zombieland: Double Tap and Maleficent: Mistress Of Evil end.

The former barely takes itself seriously and is a fun ride, while the latter is supposed to be one of Disney's darkest movies till date. Also, Zombieland 2 is arguably as good as its original, or even (I suspect) a tad better, while Maleficent 2 is as uninspiring as its prequel.

Aurora (Elle Fanning) is now the queen of the Moors, and is soon to be the queen of the humans as well. Yes, Prince Phillip (Harris Dickinson) has finally proposed, and their union also sparks a hope for peace between the humans and the fairy folk / woodland creatures. There's one minor hiccup, though - the Prince's parents wish to meet Aurora's mother, who just so happens to be Maleficent (Angelina Jolie).

Things don't go according to plan at the royal dinner, and Maleficent is treated coldly by the human Queen Ingrith (Michelle Pfeiffer). Aurora is forced to pick a side, and everything threatens to unravel, until Maleficent meets Conall (Chiwetel Ejiofor) who urges her to fight for peace. An epic showdown in the human capital is all but inevitable, and everything that is near and dear to Aurora is at stake.

The original 14th century tale of Sleeping Beauty is absolutely dark, and we should be thankful for Charles Perrault and the Brothers Grimm for the story we know today. The original Maleficent tried to put a "darker" spin on it by giving us the perspective of Maleficent, who originally was the villain, and tried to paint her in shades of grey.

The primary thing which makes this film better than the previous one is that there is a lot at stake here. Aurora is an actual danger, along with all her fey friends. There is a clear villain here, who is nothing short of a genocidal maniac, which makes you think if there's some kind of message here (if there is one, it is a little lost in the general vagueness that is the third act of this mobvie).

But this also brings us to how the movie ignores its own point about racism (discimination against fairies doesn't have a term as far as I know, so we are sticking with racism for now) in a way, giving scant thought for how the racist queen is dealt with at the end. Saying "poof" and making the person responsible for the entire problem disappear for the grand finale is a very shoddy way of talking about racism - screw it, I am going to call it downright irresponsible.

All the familiar tropes that Disney utilizes are here - the cute large-eyed fairies, the imposing but kind woodland creatures, and the dark fey who aren't as dark as their name suggests including the titular Maleficent herself. This story has been done before, but Disney has generally managed to put a twist each time that endears their offering to the masses. Maleficent: Mistress Of Evil sadly doesn't seem to have that X factor.

Apart from its very average story, the sequel's biggest crime is to limit Jolie's screen time. Angelina Jolie takes command as Maleficent in each scene she appears, but there simply isn't enough of her in the frame this time around. We would have loved to see less of the evil mother and her warmongering ways, and more of Maleficent and Aurora. This is not to take away from Michelle Pfeiffer's performance, though - she channels her inner Cersei Lannister admirably.

Despite my lack of expertise when it comes to Disney princesses, I can say that Elle Fanning looks and acts the part. Sam Riley is great at the goofy bits, which is great because the CGI makes the fairy aunts look garish and unnatural, and their humour is as flat as their faces. Chiwetel Ejiofor is believing in Angelina Jolie again after (spoiler alert) Salt, and Ed Skrein looks like he perpetually plays the guy who thinks conflict is a solution.

Disney tries to balance the scales between light and cheery, and dark and dreary, in terms of the mood they wish to showcase through set design, visuals and sound. It feels a little too distinct this time around - the blacks and whites are clearly separated. The end credits roll along with a song by Bebe Rexha which isn't quite an earworm unlike a lot of other tracks on Disney movies.

If you're in the mood for a sequel this weekend, you'd be better off watching zombies get pummeled. If you have kids, stay at home, honestly - this movie is much darker than most Disney productions from the point of view of a child. If you are a huge fan of Angelina Jolie, then maybe I can... nah (we spoke about her not having enough screen time), just go for Zombieland: Double Tap anyway.
Share. Save. Connect.
Tweet
MALEFICENT: MISTRESS OF EVIL SNAPSHOT 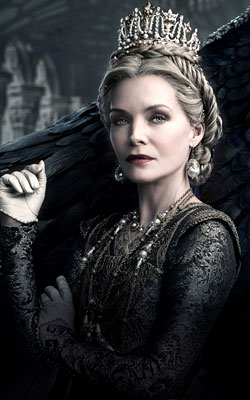 ADVERTISEMENT
This page was tagged for
rdx movie.makeficent mistress of evli
Maleficent: Mistress Of Evil english movie
Maleficent: Mistress Of Evil reviews
release date
Angelina Jolie, Elle Fanning
Follow @fullhyderabad
Follow fullhyd.com on
About Hyderabad
The Hyderabad Community
Improve fullhyd.com
More
Our Other Local Guides
Our other sites
© Copyright 1999-2009 LRR Technologies (Hyderabad), Pvt Ltd. All rights reserved. fullhyd, fullhyderabad, Welcome To The Neighbourhood are trademarks of LRR Technologies (Hyderabad) Pvt Ltd. The textual, graphic, audio and audiovisual material in this site is protected by copyright law. You may not copy, distribute, or use this material except as necessary for your personal, non-commercial use. Any trademarks are the properties of their respective owners. More on Hyderabad, India. Jobs in Hyderabad.