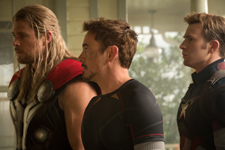 Zehra Abbas / fullhyd.com
EDITOR RATING
8.0
Performances
Script
Music/Soundtrack
Visuals
7.0
6.5
7.0
8.5
Suggestions
Can watch again
Yes
Good for kids
Yes
Good for dates
Yes
Wait to rent it
No
Avengers: Age of Ultron is a comic book aficionado's dream come true; it's got a huge ensemble of kick-ass superheroes, a megalomaniacal villain, thousands of evil minions, adrenaline-on-speed action and cutting-edge digital wizardry. Did we mention Scarlett Johansson in spandex? Yes, it is every comic book geek's dream come true. Its biggest disappointment is that the franchise was ripe for a paradigm shift and the makers have failed to grasp the opportunity.

Avengers: Age of Ultron is basically a fun ride. So all it requires from you is to sit back, put your mind on autopilot (your very own Jarvis moment), and let loose a few "woo hoos" now and then. This is uncomplicated viewing and perfect weekend fare if you're not in the mood for content-heavy cinema. So go ahead, unleash your inner nerd. You know you want to.
Share. Save. Connect.
Tweet
AVENGERS: AGE OF ULTRON... SNAPSHOT
AVENGERS: AGE OF ULTRON (3D) SNAPSHOT 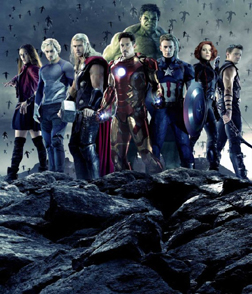 ADVERTISEMENT
This page was tagged for
Avengers: Age Of Ultron (3D) english movie
Avengers: Age Of Ultron (3D) reviews
release date
Robert Downey Jr., Chris Evans
theatres list
Follow @fullhyderabad
Follow fullhyd.com on
About Hyderabad
The Hyderabad Community
Improve fullhyd.com
More
Our Other Local Guides
Our other sites
© Copyright 1999-2009 LRR Technologies (Hyderabad), Pvt Ltd. All rights reserved. fullhyd, fullhyderabad, Welcome To The Neighbourhood are trademarks of LRR Technologies (Hyderabad) Pvt Ltd. The textual, graphic, audio and audiovisual material in this site is protected by copyright law. You may not copy, distribute, or use this material except as necessary for your personal, non-commercial use. Any trademarks are the properties of their respective owners. More on Hyderabad, India. Jobs in Hyderabad.