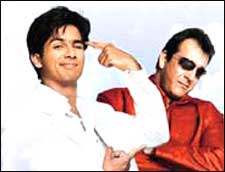 Ghazala Rizvi / fullhyd.com
EDITOR RATING
5.0
Performances
Script
Music/Soundtrack
Visuals
NA
NA
NA
NA
Suggestions
Can watch again
NA
Good for kids
NA
Good for dates
NA
Wait for OTT
NA
When Henry Ford first introduced the concept of assembly line, he never dreamed that 90 years later, one Mahesh Manjrekar will use the same to construct one of the bigger duds of filmdom. Vaah! Life Ho To Aisi has passed through an assembly line where it's picked a camshaft from here, a valve tap from there, and the entire chassis from Shekhar Kapoor's shop. But not even the garnish, in the form of Sanjay Dutt in the full regalia of Yamaraj - The Snatcher Of Souls, can save this one.

The story is about Adi (Shahid Kapoor), his dialysis-dependent grandmother, his alcoholic uncle, his timid aunt, his bubbly sister Anjali, his 7 nephews and nieces, his girlfriend Piya (Amrita Rao), his enemies Indravardhan and Panki... well, let's just say it's about a big Indian parivaar.

Adi is a boy every Indian prays to the saints for. He has most of the qualities that result from being born into the middle-class, and some, from sheer directorial intervention - he is sweet, sexy, solicitous and doting, has a six-pack, and drives fantastic cars. Cutting short the long episode of familial bliss, clichéd pranks and puppy love (you, however, will have to sit through it all), we'll start where Adi ends his life in a road accident. And finds himself seated in a vintage 1927 Chevrolet, with Yama (Sanjay Dutt) sporting Ray-Bans.

Ordinarily, a lifetime's worth of religious upbringing would have come crashing down - imagine yourself finding Samael in Versace or Mal'akh Ha-Mavet driving a Porche? But not for Adi. He befriends the avant-garde snatcher-of-souls, and in return gets a 7-day breather to settle his earthly scores.

Down below, his family is being plagued by a checklist full of maladies. There are creditors who surreptitiously want to take over Adi's massive yet decrepit bungalow, there are unsuitable suitors for Piya, and there is a piggish would-be-pa-in-law of Anjali, bent upon skinning the ladkiwaalas.

How Adi comes alive to the occasion and brings nemesis to the trouble-makers, makes up the remaining part of the tale. He is helped by Fakira (Arshad Warsi), who is a conduit between the 2 worlds. But Arshad, with his Hanuman Chalisa recitals and art-of-living-for-lost-spirits gig, will not be able to help the movie either.

Vaah! Life Ho To Aisi is a mélange of cut-copy-paste scenes. There is nothing original about the plot, the presentation, or the climax. If you are unlucky to have watched Pyaar Ka Saaya, which itself was a direct lift from Ghost, you'll find the Fakira sequence odious, and, after Anil Kapoor's Mr. India, Shahid's invisible gimmicks, trite. Origanility is flouted brazenly when Shahid does his floating-in-air and changing-his-size scenes. Kids, even the very small ones, have seen it once, and seen it all, already.

Himesh Reshammiya's tuning to Sameer's lyrics is a bit offbeat. The music on the whole is fast-paced but raucous, and the songs are not backed by good choreography.

The movie has two pluses - cute, smart kids, and Sanjay Dutt. We would have liked to add Amrita Rao too, but the lady's presence is too thinned out to register. The sheer number of the youngsters makes their presence chaotic where it should have been enjoyable. However, you'll find yourself smirking despite yourself whenever Yama makes his presence on screen. Fan or not, you'll enjoy Sanjay stealing the flick right from under Shahid's nose.

Unless you are very young, or old enough to have young kids of your own, keep away.
Share. Save. Connect.
Tweet
VAAH! LIFE HO TO... SNAPSHOT
VAAH! LIFE HO TO AISI SNAPSHOT

ADVERTISEMENT
This page was tagged for
vaah life Ho to aisi Hindi sex story
Vaah! Life Ho To Aisi hindi movie
Vaah! Life Ho To Aisi reviews
release date
Sanjay Dutt, Shahid Kapoor
Follow @fullhyderabad
Follow fullhyd.com on
About Hyderabad
The Hyderabad Community
Improve fullhyd.com
More
Our Other Local Guides
Our other sites
© Copyright 1999-2009 LRR Technologies (Hyderabad), Pvt Ltd. All rights reserved. fullhyd, fullhyderabad, Welcome To The Neighbourhood are trademarks of LRR Technologies (Hyderabad) Pvt Ltd. The textual, graphic, audio and audiovisual material in this site is protected by copyright law. You may not copy, distribute, or use this material except as necessary for your personal, non-commercial use. Any trademarks are the properties of their respective owners. More on Hyderabad, India. Jobs in Hyderabad.