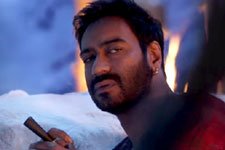 Swaroop Thotada / fullhyd.com
EDITOR RATING
5.0
Performances
Script
Music/Soundtrack
Visuals
5.0
4.0
5.0
7.0
Suggestions
Can watch again
No
Good for kids
Yes
Good for dates
Yes
Wait for OTT
Yes
We watch action movies that are cluttered with wall-to-wall fight and chase sequences and complain that the films are too adrenaline driven and that the characters are glaringly one-dimensional. Then we get movies like Shivaay that make us repent we ever asked for character development. Shivaay looks like a film that was made to counter the demand for actual writing in an action film, by suffocating you with terrible characters that are best left unexplored.

Shivaay (Ajay Devgn) is a mountaineer, dwelling on and swinging around high altitudes where oxygen and subtlety are terminally sparse. He is so pungently narcissistic, he refers to himself in third person, in lines that couldn't possibly get any cheesier. He wields the tattooed versions of the naag and the trishool, and his conceptualisation of the Lord of Destruction is just one ganja pipe far. He passionately puffs it throughout the Himalayan-episode, but even knowing he is stoned most of the time doesn't make the boorishness forgivable, as Devgn plays the character with such witless self-indulgence.

Apparently tattoos are always cool, and a Bulgarian tourist (Erika Kaar, a poor man's Isla Fisher) ends up in helpless infatuation with Shivaay, head over heels. Brief moments of passion ensue and she finds herself pregnant. An enraged Shivaay almost kills himself, his girlfriend and everyone in the way with reckless driving. He then makes a pathetic attempt at emotional manipulation to make her give him the baby and then go on with her life the way she wants.

She tells him that she has her own plans for her life but finally gives in to Shivaay's relentless persuasion. This entire scene is so problematic, so boring, so long and so unwatchable, but unfortunately is central to the story. The daughter Guara (Abigail Eames) grows up and finds out her mom is not dead after all, and now wants to meet her to ask why she abandoned her. So, off to Bulgaria, and then she is "taken".

Films like Shivaay cannot afford to slow down for drama. Not that wall-to-wall action is the only acceptable approach for kidnap flicks, but when a film dedicates a huge chunk of its time to explore its characters, they better be interesting or relatable. Films like Taken (an obvious inspiration for this film) spend on the runway for only as long as necessary to establish the emotional counterpoints and the character traits that leverage the plot at the key turns. Unfortunately, Shivaay is a boring character and one that cannot be grounded in reality. The other characters can't compensate, as they are elbowed out to make room for Shivaay most of the time. To make up for the lack of a well-thought-out conflict, the film resorts to heavy-handed melodrama brewed between a regressive central character and criminally under-developed supporting characters.

Ajay Devgn delivers a brooding and moody performance for most of the time that forces the film to take itself seriously, and hence renders it devoid of any fun. Sayyeshaa Saigal as an officer in the embassy and Vir Das as her wannabe boyfriend do not make any impact. Erika Kaar's phony Hindi is impressive anywhere outside, but is distractive and unappealing in the film. Abigail is sweet and it helps.

Aseem Bajaj's cinematography brings the grandeur and spectacle, but deliberately shaking the camera during chases is so yesteryear. The background score is loud, and reflects the sensibilities of the script. And the film could easily be 30 minutes shorter had they removed the slo-mo shots.

Having said that, there are a few scenes that really work, but they are too few and too far apart.
Share. Save. Connect.
Tweet
SHIVAAY SNAPSHOT 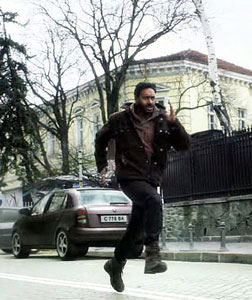 ADVERTISEMENT
This page was tagged for
Shivaay hindi movie
Shivaay reviews
release date
Ajay Devgn, Sayyeshaa Saigal
theatres list
Follow @fullhyderabad
Follow fullhyd.com on
About Hyderabad
The Hyderabad Community
Improve fullhyd.com
More
Our Other Local Guides
Our other sites
© Copyright 1999-2009 LRR Technologies (Hyderabad), Pvt Ltd. All rights reserved. fullhyd, fullhyderabad, Welcome To The Neighbourhood are trademarks of LRR Technologies (Hyderabad) Pvt Ltd. The textual, graphic, audio and audiovisual material in this site is protected by copyright law. You may not copy, distribute, or use this material except as necessary for your personal, non-commercial use. Any trademarks are the properties of their respective owners. More on Hyderabad, India. Jobs in Hyderabad.