Godzilla 2: King Of The Monsters Review 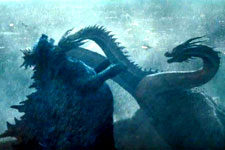 Punarvasu Pendse / fullhyd.com
EDITOR RATING
6.5
Performances
Script
Music/Soundtrack
Visuals
6.0
5.0
7.0
8.0
Suggestions
Can watch again
Yes
Good for kids
Yes
Good for dates
Yes
Wait to rent it
No
The sequel to Godzilla(2014) and the third movie in Legendary Pictures' Monsterverse, Godzilla 2: King of the Monsters returns to the original Toho-esque vision of monsters rampaging on the screen, something that the first movie sorely lacked and was criticised for (it gave only seven minutes of screentime to Godzilla).

Screenwriter Michael Dougherty took over from Gareth Edwards as the director of the movie. Dougherty stated that while he loved Edwards's slow-build, his film would definitely take the gloves off and not hold back. And he was true to his word - Godzilla 2 absolutely packs a wallop in terms of the action.

The human focus of Godzilla 2 is now on a fragmented family - scientists Mark (Kyle Chandler) and Emma Russell (Vera Farmiga), and their teenage daughter Madison (Millie Bobby Brown). The Russells have lost their elder son in the 2014 Godzilla incident, and have since separated, forming an interesting conflict that goes beyond personal grief and portrays strong ideological ties. Emma and Madison are captured by eco-terrorist Alan Jonah (Charles Dance) in order to get his hands on the ORCA, a powerful sonar device that mimics "alpha" titan cries to render lesser monsters docile.

A special team is formed to rescue the biologist and her daughter, and reclaim the ORCA - which includes Ishir? Serizawa (Ken Watanabe) and Vivienne Graham (Sally Hawkins) from the previous movie. Frantic chases across the globe ensue, with all the Godzilla monster staples - King Ghidorah, Mothra, Rodan - featuring in elaborate battles over land, sea and air. All of which poses the fundamental question: do these titanic monsters pose a threat, or is it the humans that are a curse to the earth?

This question is in the driving seat for the entire 132 minute runtime of Godzilla 2. The film's writing firmly puts each character on a spectrum which ranges from "kill the damn monsters" to "the titans are our allies". A couple of characters seem to have motivations which purely stem from the need to incorporate their arcs on this graph the writers created. When things are not being blown to smithereens, Godzilla 2 talks a lot about the impact of humanity on the world. The message, however, is pretty clear by the end of the movie - you, the viewer, aren't really allowed to reflect upon your own stance on the fate of these monsters.

Godzilla has a huge cast, and there are some solid performances all around. The primary trio of Chandler, Farmiga and Brown are mostly believable, even if Chandler's character is the belligerent know-it-all and Farmiga's character is surprisingly gung-ho about things. Brown injects the film with an energy that was much applauded in Netflix's Stranger Things, but her character is a tad unbelievable. There are more supporting characters than needed, honestly, like the bumbling Dr. Sam Coleman (Thomas Middleditch). Even the motivations of Colonel Alan Jonah (Charles Dance), as the identifiable villain of the movie, leave you perplexed by the end.

The huge cast problem bugs the monsters as well - you are left questioning the actions of King Ghidorah and Rodan (not to mention the several other smaller monsters). Godzilla himself is more central to the story this time, and marks his authority each time he appears on the screen, but the show stealer here is Mothra. The queen is the real visual treat in a movie about the king of monsters, with some beautiful panoramic shots that feature a waterfall playing the curtain as Mothra illuminates the screen with her bioluminescence. Truly spectacular.

Bear McCreary does an exceptional job with the music, writing every single track in what he termed as "the most audacious he has ever been" in an interview with the Rolling Stones magazine. The background sound helps set the mood for the dark-ish visual tone that the movie takes on, and hits a crescendo whenever any of the monsters duke it out on the screen, that gives you the chills.

To some connoisseurs of cinema, this will be a film that suffers from the constant need to make everything look and feel epic. For a majority, though, Godzilla 2: King of the Monsters has plenty of things going for it - fantastic special effects, a story that focuses on the humans as much as it does on the monsters, and a large number of easter eggs for the hardcore fans. Leave subtlety to the others, and go watch the king stomp around!
Share. Save. Connect.
Tweet
GODZILLA 2: KING OF... SNAPSHOT
GODZILLA 2: KING OF THE MONSTERS SNAPSHOT 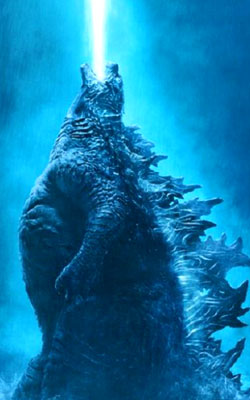 ADVERTISEMENT
This page was tagged for
Godzilla 2: King Of The Monsters english movie
Godzilla 2: King Of The Monsters reviews
release date
Kyle Chandler, Vera Farmiga
theatres list
Follow @fullhyderabad
Follow fullhyd.com on
About Hyderabad
The Hyderabad Community
Improve fullhyd.com
More
Our Other Local Guides
Our other sites
© Copyright 1999-2009 LRR Technologies (Hyderabad), Pvt Ltd. All rights reserved. fullhyd, fullhyderabad, Welcome To The Neighbourhood are trademarks of LRR Technologies (Hyderabad) Pvt Ltd. The textual, graphic, audio and audiovisual material in this site is protected by copyright law. You may not copy, distribute, or use this material except as necessary for your personal, non-commercial use. Any trademarks are the properties of their respective owners. More on Hyderabad, India. Jobs in Hyderabad.