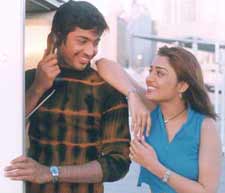 Into the equal opportunity world of Tollywood steps in another young man who worked extremely hard to be born to the right person, and is finally reaping the rewards. Despite all the obstacles that came his way such as the lack of any acting skills whatsoever, the lack of any heroic build whatsoever and the lack of any charisma whatsoever, he makes it into the big league. We at fullhyd.com are extremely glad whenever we see success stories like this. They give an important message to all those waiting outside the studios - to just be born of the right sperm the next time around. 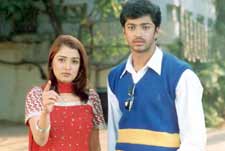 Aryan Rajesh (Aryan Rajesh) returns from America after finishing his MBA, and starts doing what he's best at - roaming about with his friends. Enter Priya (Nikita) with a dive into a pool that unfortunately has water, thereby prolonging the movie. Then according to the Rule 142 of the Telugu Filmmaking Manual, they first meet in a mall. FLASH, FLASH and another blinding FLASH, and he's in love with her (can't help it... needed for Rule 143 compliance!).

The hero and heroine enter a billiards bar... and it's Bim Bam Bim Biff Ouch!!! The guy who was ogling at the heroine is flat, and so is the heroine. But when they propose to the father of the heroine (Prakash Raj), he objects, giving the usual yadda yadda about failures of love. He then throws up a novel challenge to the lovers - and believe me, when I say novel, it is NOVEL. Any resemblance to Ek Dooje Ke Liye or its copy Nuvve Nenu strictly means you've been watching too many movies. 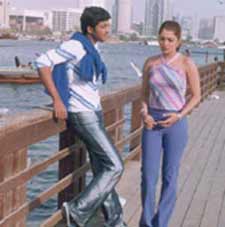 The challenge is that he will send them both to a foreign country for a month, and after coming back if they are still in love, he will get them married. Then Twist, Sob-Sob, Twist, another Twist and yet another Sob-Sob, and the hero and heroine get married. The End. It is a happy ending in the true sense; everyone is happy that it's ended.

Aryan Rajesh causes you a to develop a new respect for that doyen among actors, Uday Kiran. If there was any concept like anti-matter in this universe, then Aryan is perfect anti-matter for Arnold... he has absolutely no physique at all! The heroine, with fingers fatter than those of Narasimha Naidu, seems more macho than the hero himself. There are some good scores from Koti, which is the only thing prompting me to give this movie a rating far better than what it deserves. 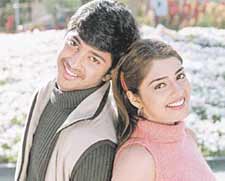 Recommendation? Oh, YES! I recommend this movie to all the M-type people - M as in S&M. Because every single scene save for some good sceneries will urge you to slide off your chair and smash your skull into the floor, and I bet you will enjoy it better that way.
Share. Save. Connect.
Tweet
HAI SNAPSHOT
See Hai full details
HAI USER REVIEWS
1 - 5 OF 5 COMMENTS
POSITIVE  |  NEGATIVE |  NEWEST  |  OLDEST  |  MOST HELPFUL  |  LEAST HELPFUL
USER RATING
2.4
5 USERS
Performances
Script
Music/Soundtrack
Visuals
NA
NA
NA
NA
Can watch again - NA
Good for kids - NA
Good for dates - NA
Wait for OTT - NA
Nagender Telkar on 28th May 2002, 7:15am | Permalink
Hello Kiran..

RATING
4
GK on 28th May 2002, 12:09am | Permalink
...The heroine with fingers fatter than Narsimha naidu...hahahaha good review..I laughed like anything.
RATING
2
Ramesh Reddy on 27th May 2002, 9:33pm | Permalink
hi every body,
actually i was in a very good kind of spirits while i was going to that movie but all my elated spirits are starting to fall by seeing the first half of the movie
i don't why EVV is have that much grudge on his own son even if it directed by some kannada director it would have sounded better thanks to naresh's decision to go into the movies with out the support of his father othere wise his career is also at the worst
it's time for EVV to change his trend or other wise to wuit the industry i prefer to watch a an awrd winning malayam movie to this movie even the worst flop in the history is better than this

ADVERTISEMENT
This page was tagged for
hai movie telugu review
Hai telugu movie
Hai reviews
release date
Aryan Rajesh, Nikhita
Follow @fullhyderabad
Follow fullhyd.com on
About Hyderabad
The Hyderabad Community
Improve fullhyd.com
More
Our Other Local Guides
Our other sites
© Copyright 1999-2009 LRR Technologies (Hyderabad), Pvt Ltd. All rights reserved. fullhyd, fullhyderabad, Welcome To The Neighbourhood are trademarks of LRR Technologies (Hyderabad) Pvt Ltd. The textual, graphic, audio and audiovisual material in this site is protected by copyright law. You may not copy, distribute, or use this material except as necessary for your personal, non-commercial use. Any trademarks are the properties of their respective owners. More on Hyderabad, India. Jobs in Hyderabad.