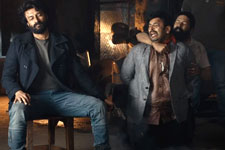 Sai Tulasi Neppali / fullhyd.com
EDITOR RATING
5.5
Performances
Script
Music/Soundtrack
Visuals
6.0
4.0
7.0
7.0
Suggestions
Can watch again
No
Good for kids
No
Good for dates
No
Wait for OTT
No
An elite police force scrambles to identify a mysterious man known only as Godse, who has kidnapped several high-ranking government officials. Several hours of investigation yields no leads. Godse is a ghost. But then one of the so-called data experts has an idea?-? ah, Google! He types "Godse" into the search bar, and begins to enthusiastically scroll through the results. It is all you can do to suppress a laugh.

In an egregious "Starbucks cup in Game of Thrones" moment, there is a glaring "CGI" label at the bottom corner of the screen, in a shot of an eagle gliding high up in the sky. For a second, I thought the stream switched to Nat Geo! Godse is so chock-full of such flubs, it is at times unintentionally funny.

The story is nothing new?-?a frustrated man turns vigilante to expose government corruption and bring the perpetrators to justice. Several movies like Republic, Khaidi No. 150, Dookudu and Leader have beaten this dead horse, with perhaps far better impact. Godse adds nada to this template. It's a faint carbon copy of a carbon copy of politically charged movies like V For Vendetta. It is at times even shamelessly derivative, as when Godse and his crew carry out kidnappings in a Guy Fawkes mask.

A series of Skype calls between Godse (Satyadev Kancharana) and a Special Police hostage negotiator, Vyshali (Aishwarya Lekshmi), makes up the main thread of the movie. From his dingy lair on a faraway island where he holds several mid-level corrupt officials hostage, Godse dials in. He leans far back into his chair, his face haggard, his hands gripping a gun, as he stares intensely into the camera, at Vyshali, and lists his demands. He summons a string of hotshot politicians to the negotiating table and threatens them till they confess their sins. Thus, a massive money-laundering scam that runs all the way up to the Chief Minister is revealed. Still, we know little about Godse himself. Surely some great tragedy has led him to resort to such extreme tactics.

It is in the latter half of the movie that Godse's tragic story is told via flashback. He was once an ultra-wealthy businessman living in London who relocated to India with the high-minded vision of creating thousands of jobs (aren't they all?). But fighting the good fight in a cesspool of Indian politics, he loses everything and everybody dear to him, and turns into a raging revenge-seeker.

Godse tries to be a hard-charging movie, but the writing is so drab and infantile, that you are embarrassed for the actors who have to mouth such lines: a top cop introduces himself as "I'm from Intelligence"; a boss chides an employee with "don't irritate me" and later begs her, "you're my only hope"; and funniest of all, several hushed warnings about Godse that are dryly repeated, that "he is very smart" and "he needs to be stopped". A play written by high school kids might have more captivating dialogue.

The story too plods along well-worn crime-drama clichés?-?data is hacked, and geo-locations are tracked using glistening computer graphics. There is even a montage of a master hacker (Priyadarshi) writing gibberish C++ code to steal evidence of fraud from behind a firewall. It's copy-paste storytelling at its dullest.

Many of the characters are entirely unconvincing, too. Director Gopiganesh Pattabhi is way off the mark with his interpretation of Vyshali. In a high-stakes negotiation with Godse, she shows about as much tact as Tom evading Jerry. She pleads and goads, huffs and puffs, and gesticulates wildly. She strides down corridors looking hot and bothered, utterly unfit for such a delicate job.

Pattabhi also leans on a parade of veteran actors for various small roles (Tanikella Bharani, Brahmaji, Nagendra Babu), but their insipid dialogues alongside their horrendous dubbing make them puppet-like.

If there is any reason to sit till the credits roll, it is for actor Satyadev's sparkling performance against all odds. He is perfectly cast as the tender-hearted friend and husband, as well as the gun-toting bloodthirsty renegade he later becomes. He flirts, yells, smirks and weeps with pitch-perfect precision. Perhaps Satyadev's best acting to date is in scenes where he is alone, talking directly to the camera, with no one else on the screen to eclipse his brilliance. Even the cinematography, which is nothing special otherwise, is captivating in Satyadev's scenes where his face is lit by a misty yellow light.

Satyadev, who caught his big break during the last two years with movies like Uma Maheswara Ugra Roopasya, has once and for all proven his ability to carry a big-budget movie by himself, to transform even a shoddy one into something watchable.

While Godse doesn't aim to be original in its approach, it does shed light on a simmering issue in our country?-?millions of disillusioned youth who are unable to find jobs in their fields of study. In one memorable scene, Godse's high school friend, responding to the suicide of one of their classmates, asks around a circle of youngsters, "What did you study?" and then "Where do you work now?". An engineer is now a cab driver, a topper is now a tutor. Godse pins this crisis upon greedy politicians who resort to cronyism, burying real entrepreneurs under a mountain of regulation. His answer is to simply get rid of such bad actors. Kill them. As if chopping off one of Hydra's heads won't grow two in its place.

In our cynical world, where any real justice arrives too little, too late, perhaps our only respite is at the movies?-?watching a God-like hero annihilate a gaggle of evil men with the push of a button. But I'm far from convinced that Godse has what it takes to soothe our souls.
Share. Save. Connect.
Tweet
GODSE SNAPSHOT 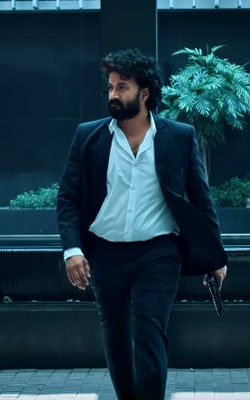 ADVERTISEMENT
This page was tagged for
Godse telugu movie
Godse reviews
release date
Satyadev Kancharana, Aishwarya Lekshmi
theatres list
Follow @fullhyderabad
Follow fullhyd.com on
About Hyderabad
The Hyderabad Community
Improve fullhyd.com
More
Our Other Local Guides
Our other sites
© Copyright 1999-2009 LRR Technologies (Hyderabad), Pvt Ltd. All rights reserved. fullhyd, fullhyderabad, Welcome To The Neighbourhood are trademarks of LRR Technologies (Hyderabad) Pvt Ltd. The textual, graphic, audio and audiovisual material in this site is protected by copyright law. You may not copy, distribute, or use this material except as necessary for your personal, non-commercial use. Any trademarks are the properties of their respective owners. More on Hyderabad, India. Jobs in Hyderabad.