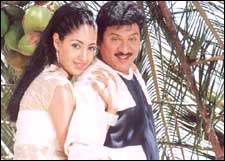 Mithun Verma / fullhyd.com
EDITOR RATING
5.0
Performances
Script
Music/Soundtrack
Visuals
NA
NA
NA
NA
Suggestions
Can watch again
NA
Good for kids
NA
Good for dates
NA
Wait to rent it
NA
There can be a million comedians, but there is only one Rajendra Prasad. You specifically realise this when he's dancing in this movie. Having said that, his dancing was probably introduced for that itself. Even his wig and paunch, probably. Even the plot. And all the other actors.

Harischandra (Rajendra Prasad) lives in a cinematic middleclass crisis, with a modest salary, a pesky son and an overweight wife (Raasi). But those are not the only tensions that his mind (somewhere under that wig) has to accommodate. He has other issues going on, like lending originality to his character that's exactly like Jagapathi Babu's in Shubhalagnam. Being the actor that he is, he does a good job of it, and that's when things go wrong.

They ask him to play another battered cliché. Having the name Harishchandra, he finds himself lying unabashedly. That's because a Swamiji tells his greedy wife that if they lie consistently, they'll end up with a daughter. And they need a daughter, as the wife's big bro promises to deposit one crore on her name.

One crore is a lot. Especially if it's money we're talking about. Raasi doesn't want to pass up on this opportunity to make some money. Because in all probability, that's the only money the movie will ever make. Anyway, she forces Harishchandra to start lying.

And because of this, he ends up marrying another woman (Gurlin Chopra). Harishchandra owes money to his friend (Jeeva), and when he offers his sister's hand, Harishchandra's not able to refuse.

Raasi is so virtuous. So after this second wife walks in, Raasi becomes the maid servant. She's introduced as a single mother, a relative of Harischandra. But one day, the 2nd wife finds out that Raasi is pregnant.

This greatly confuses her. How can this happen to a single woman? It confuses us even more. The way Raasi's abdomen was in the songs, we assumed that she was carrying from the beginning of the movie itself. Now we know. Moreover, that logic has holes. That way, even Rajendra Prasad must be carrying!

And he does carry. Not a baby, but the whole movie, on his aging shoulders. He remains great during the lighter moments as well as during the pseudo emotional scenes. In the end, all the three of them live happily with their respective babies.

The first half of the movie, though irritatingly reminding us of Shubalagnam, is fairly interesting, and earns it a decent rating, thanks to the Rajendra Prasad's humor timing. No clever dialogues - just his timing keeps it going here. The second half is overwhelmingly emotional. A lot more humor here that wasn't meant to be funny. A lot of crude attempts at humor, though.