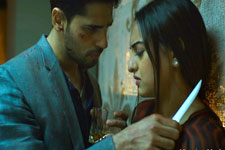 T J Reddy / fullhyd.com
EDITOR RATING
7.0
Performances
Script
Music/Soundtrack
Visuals
8.0
7.0
5.0
8.0
Suggestions
Can watch again
Yes
Good for kids
No
Good for dates
Yes
Wait to rent it
No
At the onset of The Prestige, Cutter (Michael Caine) is busy showing a little girl the simplest of magic tricks and conditioning the audience's minds for the movie they are about to see. While eloquently describing the second stage of a trick (The Turn) as only Michael Caine can, Cutter drops a line which rings true for most mystery/thriller aficionados because with a good mystery, "You're looking for the secret, but you won't find it, because of course you're not really looking. You don't really want to know. You want to be fooled."

Between bouts of being utterly engaged by director Abhay Chopra's Ittefaq, I spent the limited windows of downtime trying to piece together the mystery for myself. I was working in tandem with investigating officer Dev (Akshaye Khanna) at trying to poke holes in the stories Vikram Sethi (Siddharth Malhotra) and Maya (Sonakshi Sinha) were monologue-ing through.

I was busy using my vantage point of grizzled moviegoer as I looked through costume colours, makeup, lighting and editing choices, and logical reasoning hoping that I would solve the mystery before the movie eventually solved it for me. To the film's credit, it played its cards close to its chest as long as it could, and somewhere along the hour mark I cracked its code by realizing that I was busy looking at all the right things through the wrong prism because subconsciously, I wanted to be fooled by its narrative, too.

Set during a rainy weekend in Mumbai, Ittefaq begins with renowned author Vikram Sethi speeding down the streets being chased by the Mumbai Police on the count of being the prime suspect in the death of his wife Catherine (Kimberley Louisa McBeath). A car crash, some genuinely humorous cop banter and a Sonakshi Sinha intro shot later, the police find Vikram standing over the lifeless body of Maya's lawyer husband Shekhar Sinha. Chief investigating officer Dev is given an arbitrary time frame of three days to solve the murders with his primary aides being the crime scene, his forensic team and two wildly different accounts of the same night.

Dev, however, is not your regular grandstanding supercop nor is he a brooding detective from movie noir's heyday. Like his name suggests, he is a thoughtful, resourceful, funny and intelligent man. Like the movie he is in, his life has a series of inconvenient obstacles, bafflingly nonsensical occurrences and caricatures of Mumbai. He wades through those with ease while taking his band of merry men along for the ride.

While conveying Dev's enviable deductive skills through visuals and staging, the movie cleverly pervades the audience's minds with the fact that this specific case is where his nous has finally met its match. Between listening to the dual accounts of the same night and humanising his subjects, Dev crosses his arms, sits himself down and thinks. HE STOPS TO THINK. WOW! You, sir, are better than 95% of movie cops already.

The movie rarely gives Vikram, Maya or any of the supporting characters a chance to impede Dev's investigation with overlong monologues or needless emotions (even if the fact that Vikram has multiple stabs at telling different parts of the same story seems jarring). Everyone is efficiently given their time slot to speak up about their alibis while comic relief and foreshadowing are woven into Dev's daily routine which includes chai drinking, shoe wiping and reading magazines in the welcome silence of the can.

Akshaye Khanna might have found his niche as the young Jim Gordon of Mumbai. Ittefaq-ly (coincidentally) his previous work in Mom and his current iteration of a hardened yet human cop are excellent showcases of his layered acting and ability to carry a movie with nothing more than a series of glances, smiles, deliberate footsteps and intimidating stances.

The marketable duo of Siddharth Malhotra and Sonakshi Sinha, while stellar when interacting with each other, are slightly exposed when sharing screentime with Khanna. Malhotra and especially Sinha overact just a tad too much in a movie that prides itself on maintaining a consistent mood and darkly humorous tone.

That gripe however is negligible as it is shrouded beneath gorgeous cinematography that mirrors that of Darius Khondji's work in Seven. The camera glides along the open streets and the closed apartment spaces of Mumbai with consummate ease as the director's and cinematographer's skills at filming story-laden one-shots and Roger Deakins-esque shot-reverse shots are on full display.

As a much more noticeable example, direct your attention to the many seemingly similar establishing shots of the cityscape which inconspicuously add a new detail each time. Sad, the music can't match the movie's visual design. Beggars (for quality cinema) can't be choosers, I guess.

Teeming with so many positive attributes, and with Karan Johar and Shahrukh Khan (why don't you star in a movie like this one?) stamping their seal of approval all over it, the relatively micro-budgeted, and tightly scripted and edited Ittefaq might have a few legs to stand on at the box office. Even though it lacks edge-of-your-seat thrills and a final reveal whose stay in the sense department might be short-lived after some introspection, Ittefaq makes for an engaging mind game whose presence on the big screen is quite welcome.

The movie demands your attention after showing you a car crash and holds it there by briskly walking you through its plot with no time to stop and question its illusion. But you don't want to really question the illusion because you don't really want to know the answer - what you want is entertainment, and the movie excels in providing you just that.
Share. Save. Connect.
Tweet
ITTEFAQ SNAPSHOT 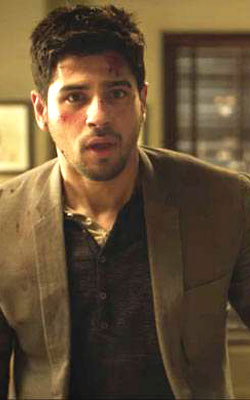 ADVERTISEMENT
This page was tagged for
Ittefaq hindi movie
Ittefaq reviews
release date
Sidharth Malhotra, Akshaye
theatres list
Follow @fullhyderabad
Follow fullhyd.com on
About Hyderabad
The Hyderabad Community
Improve fullhyd.com
More
Our Other Local Guides
Our other sites
© Copyright 1999-2009 LRR Technologies (Hyderabad), Pvt Ltd. All rights reserved. fullhyd, fullhyderabad, Welcome To The Neighbourhood are trademarks of LRR Technologies (Hyderabad) Pvt Ltd. The textual, graphic, audio and audiovisual material in this site is protected by copyright law. You may not copy, distribute, or use this material except as necessary for your personal, non-commercial use. Any trademarks are the properties of their respective owners. More on Hyderabad, India. Jobs in Hyderabad.