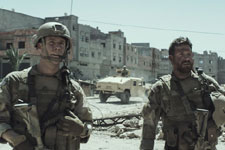 Kritika Deval / fullhyd.com
EDITOR RATING
8.0
Performances
Script
Music/Soundtrack
Visuals
9.0
7.0
8.0
9.0
Suggestions
Can watch again
Yes
Good for kids
No
Good for dates
No
Wait to rent it
No
Chris Kyle (Bradley Cooper) is the penultimate American soldier, a sharpshooter whose sniper found its mark 160 times at least, a warrior who is deeply convinced in the rightness of what he does and, by his own account at least, sleeps the sleep of an innocent baby. In the face of this ebullient lust for lives that are purported to threaten all he holds dear, his fragility away from the eternal fount of adrenaline that is war is all the more shocking.

American Sniper has been adapted from the autobiography of Chris Kyle, a man whose humility and self-awareness becomes apparent in the title of the book - "The Autobiography of the Most Lethal Sniper in U. S. Military History". In the empathetic hands of Clint Eastwood, though, this braggadocious tome turns into something only Eastwood can beget - a narrative on the thought processes of someone whose very way of life is through violence. There is no judgment, and nary an attempt at directing your thoughts. Not the slightest hint of morality sullies this intuitive chronicle of the average All-American hero.

A while after the film starts, you see Kyle as a boy hunting with his father. Later, as the family sups together, you see the moral heft placed on the boy's shoulder as the father classifies humanity into three - sheep, wolves and sheep-dogs - with the admonishment that he will not tolerate either of the two former kind in his family and that only sheep-dogs, who protect and defend, have any honor.

This scene is sandwiched smack-dab in the middle of another landmark scene - one where Kyle hits his mark for the first time in war, killing a mother and child who are in the process of lobbing a grenade at a convoy of American soldiers. It is almost as if, as a relative noob at finishing people, Kyle is trying to justify his distasteful job by reminding himself of exactly why he thought he was doing all of this. Again, no judgment on part of the makers - all that they're trying to do is decipher what is going on in the mind of this particular soldier in this particular situation, and, by extension, in the minds of tens of thousands of other soldiers who take great pride in their nations and place great stock in all the values that go into making a good soldier.

The scenes of combat in Iraq, skillfully constructed to push you to the edge of the seat, give perspective into Kyle's apparent imperviousness in the face of all the death surrounding him, the distance that the pinpoint of his view-finder puts him at from the combat, his conviction that his fellow soldiers, along with his home and hearth, are all that matters. However, it is only when Kyle comes home to his wife Taya (Sienna Miller), determined to swing right back into the warp and weft of life as usual but discomitingly unable to do so, that you come to see just how deep Bradley Cooper's understanding of his character is, and just how deft his translation of the same.

It is when he is away from war that the strength of Kyle's conviction is tested. It is at home that he is given room to think. It is with friends and family, especially his wife, that Kyle's deep discomfort with who he might become wars with who he knows for sure he is. The cracks in his bone-deep knowledge of himself are all the more violent for the feather-light touch Cooper applies on them. A sheen of moisture on the forehead, a quiet desperation in the eye, a defiant vitality in the face of weariness - these are the tools Cooper applies to the task of breaking down the psyche of Chris Kyle for our consumption. Your entire view of the world is Kyle's perspective, and if you find that narrow, maybe this isn't the film for you.

Unsurprisingly, therefore, it is Cooper who finds the entire film dropped onto his elegantly molded shoulders, a burden he carries lightly. The only other actor who can be deemed more than a bit character is Sienna Miller, and that too barely. She does the best she can with a role that occupies very little time, giving an intense portrayal of a woman who, despite being torn from her husband on the day of their wedding, is fighting to save her marriage with as much vengeance as Kyle is to save America, if not more.

The visuals are beautifully knitted together, providing a dynamic background to a simple tale told in a dynamic fashion. The soundtrack does much to direct the mood in the theatre, melting into the screenplay with fluidity and a sense of fatality.

American Sniper asks a lot of its audience despite all appearances to the contrary. In giving us such an unvarnished view into the average soldier's mind, it compels us to endow every gesture, every translation of thought, with our own meaning. It is hard work, but eventually worth it.
Share. Save. Connect.
Tweet
AMERICAN SNIPER SNAPSHOT 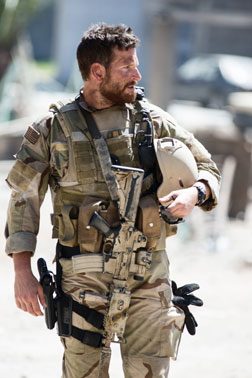 ADVERTISEMENT
This page was tagged for
American Sniper english movie
American Sniper reviews
release date
Bradley Cooper, Kyle Gallner
theatres list
Follow @fullhyderabad
Follow fullhyd.com on
About Hyderabad
The Hyderabad Community
Improve fullhyd.com
More
Our Other Local Guides
Our other sites
© Copyright 1999-2009 LRR Technologies (Hyderabad), Pvt Ltd. All rights reserved. fullhyd, fullhyderabad, Welcome To The Neighbourhood are trademarks of LRR Technologies (Hyderabad) Pvt Ltd. The textual, graphic, audio and audiovisual material in this site is protected by copyright law. You may not copy, distribute, or use this material except as necessary for your personal, non-commercial use. Any trademarks are the properties of their respective owners. More on Hyderabad, India. Jobs in Hyderabad.