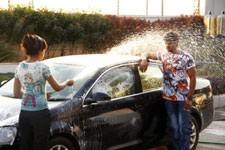 Kritika Deval / fullhyd.com
EDITOR RATING
3.5
Performances
Script
Music/Soundtrack
Visuals
6.0
3.5
4.5
6.0
Suggestions
Can watch again
No
Good for kids
No
Good for dates
No
Wait for OTT
Yes
Vaishnav (Naveen Chandra) is the quintessential big man on campus, ripped, rich, and brilliant to boot. He has women tripping over each other to get to him, and, giving lie to his brilliance, seems to have decided that his father's advice to love wisely makes it necessary to torture every female in his vicinity.

Bindu (Ritu Verma) has no time for men. She has no time for anything, in fact, other than wishing the demise of all those involved in educating her. Her puerile hatred for studies seems to have decided to become a lifelong ally. Add to that her homicidal tendencies and general propensity to violence, and we have a match for Vaishnav.

When the two meet, there are fireworks. No, really. Bindu has just attempted to bomb the principal for having given her more to study. Vaishnav, who happens to be in the office at the fateful instance, decides to take this opportunity to gain a replacement for his errant housemaid, and over the course of murderous intentions and constant blackmail, the two fall happily in love.

Then what seems to be the problem? Because there is one, not only because this is a Telugu romance and there must be one, but also because, at the beginning of the film we see our heroine headed, quite intentionally, towards her own demise.

Bizarrely enough, the answer seems to have something to do with education. It appears that the makers have decided that a reliable education and a reliable romance are impossible to conduct simultaneously, especially when the education in question is geared towards the pursuit of a degree in anything involving the words computer and engineering.

Firstly, this has to stop. We get that engineering colleges make for easy sets considering how many there are and how many are shutting down, but the surplus also exists mostly because filmmakers insist that it's only those in pursuit of that hallowed degree who can have lives interesting enough to make film about. Whatever happened to the good old days when any hero worth his salt had to be an arts student?

Secondly, there really have to be better ways to impress upon the youth the necessity of putting their careers ahead of their love lives. We are quite, quite sure that any tale on the subject that involves one of the leads attempting to take her own life is headed towards suicide (ha!).

Thirdly, there is sacrifice involved in the story, at the behest of one of our leads' parents. We thought that sort of thing had ended with the '80s.

The point is, while the first half is charming enough, mostly thanks to the utterly adorable Ritu Verma and her various antics; you will be hard put to find the will to stay through the second half, by which time Tragedy has Struck and people spend a lot of time brooding and weeping and generally being tedious.

Naveen Chandra takes to his role the same way his character takes to having a pretty young thing cooking and cleaning for him on demand. Ritu Verma, as we mentioned above, is quite stupendously adorable, and makes you want to pull her cheeks and then run away, because surely she will come after you with the nearest sharp item.

The rest of the characters are as half baked as the story is, and we don't know why a lot of them were even there. We get that MS, Krishna Bhagavan and the rest are supposed to be comic relief, but telling someone to wear a T-Shirt that says "I Am Stupid" instead of "I Am Genius" as part of therapy cannot possibly be funny by any standards. Sitara as Bindu's mother, though, is lovely, and makes us feel guilty about every time we have disobeyed our mother.

The music is not only mediocre, but also jarringly placed. The camera work is quite polished and pleasingly executed, but not when it comes to the music videos.

All in all, romance can be found in better packaging this weekend. Watch this one only if you have cross-checked your appointment book to make sure you have absolutely nothing to do.
Share. Save. Connect.
Tweet
NAA RAKUMARUDU SNAPSHOT 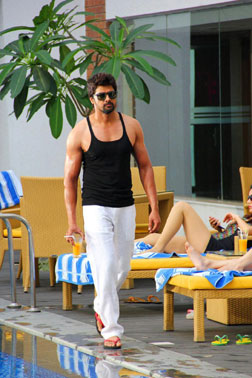 ADVERTISEMENT
This page was tagged for
naa rakumarudu review
Naa Rakumarudu telugu movie
Naa Rakumarudu reviews
release date
Naveen Chandra, Rithu
Follow @fullhyderabad
Follow fullhyd.com on
About Hyderabad
The Hyderabad Community
Improve fullhyd.com
More
Our Other Local Guides
Our other sites
© Copyright 1999-2009 LRR Technologies (Hyderabad), Pvt Ltd. All rights reserved. fullhyd, fullhyderabad, Welcome To The Neighbourhood are trademarks of LRR Technologies (Hyderabad) Pvt Ltd. The textual, graphic, audio and audiovisual material in this site is protected by copyright law. You may not copy, distribute, or use this material except as necessary for your personal, non-commercial use. Any trademarks are the properties of their respective owners. More on Hyderabad, India. Jobs in Hyderabad.