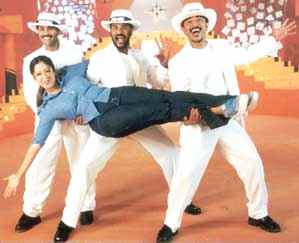 EDITOR RATING
5.0
Performances
Script
Music/Soundtrack
Visuals
NA
NA
NA
NA
Suggestions
Can watch again
NA
Good for kids
NA
Good for dates
NA
Wait for OTT
NA
Away from the Tollywood formulae, 123 is the tale of a lass and mizaru-iwazaru-kikazaru, which stands for blind-deaf-dumb monkeys in Japanese. The good news is that the flick is in Telugu. The bad news is that it wasn't, and it shows - the concept is novel, which can only mean it isn't mana vaallu teesina cinema, and the dubbing is bad, which continuously reminds you that it isn't mana vaallu teesina cinema. The totally pointless news is that Japan's emperor has a cold - we mention that because that still does more to broaden your horizons than the rest of this review will.

Here's the plot, anyway. Tirupathi (Prabhu Deva) is mizaru, the blind music-monkey who hates to admit that he is blind. Srisailam (Raju Sundaram) is iwazaru, the deaf photographer-monkey, and Bhadrachalam (Nagendra Prasad) is kikazaru, the dumb painter-monkey. Enter Narmada (Jyothika), the central character around whom the three monkeys start making revolutions for obvious ape-ish reasons.

Narmada learns that her father has been brutally murdered and that the murderers were acquitted for lack of evidence. Sometime later she discovers that the blind monkey was present at the spot when the murder happened. Not knowing that our blind monkey is blind and hence couldn't have actually served as evidence, she vows revenge on him for letting the murderers get away.

Narmada befriends the three monkeys. One fine day she beckons the blind monkey to a lonely spot and bumps him off a 300-odd-stairs staircase. Bump-Bump-Bump-Thud-Interval. Blind monkey miraculously survives the mishap. Then Narmada realizes the truth and pleads for forgiveness of the blind monkey. The blind monkey, being very empathetic, forgives Narmada of her mistake. One-Two-Three... heroine is in love with the blind monkey.

In order to revoke her mistake, Narmada moves in with them and starts encouraging the talents of the monkeys. One-Two-Three... they own the numero-uno advertising firm in India. One-Two-Three... Narmada gets married to the blind monkey. Okay, Three-Two-One... get it? No? THE-END.

The performances of both Jyothika and Prabhu Deva are above the median of current industry standards. But when it comes to the figurines department, Jyothika is way below our standards... Her behind reminds you of those of several non-human species. The choreography (partly assisted by Raju Sundaram) is amazing in some scenes.

The title song One-Two-Three from Deva has very good pace and rhythm. As is the case of all Telugu-dubbed-Tamil movies, the lyrics are BAD. Director K Subhash must have put in a gargantuan effort in executing the rather dry plot in a witty manner, and it shows positively in the movie. The pre-interval pace of the movie is excellent, which sort of tapers off during the last half an hour.

ADVERTISEMENT
This page was tagged for
Telugu 123 review
telghu 123rivew
telugu123movie
movie telugu review123
3 monkeys telugu 123movies
Follow @fullhyderabad
Follow fullhyd.com on
About Hyderabad
The Hyderabad Community
Improve fullhyd.com
More
Our Other Local Guides
Our other sites
© Copyright 1999-2009 LRR Technologies (Hyderabad), Pvt Ltd. All rights reserved. fullhyd, fullhyderabad, Welcome To The Neighbourhood are trademarks of LRR Technologies (Hyderabad) Pvt Ltd. The textual, graphic, audio and audiovisual material in this site is protected by copyright law. You may not copy, distribute, or use this material except as necessary for your personal, non-commercial use. Any trademarks are the properties of their respective owners. More on Hyderabad, India. Jobs in Hyderabad.