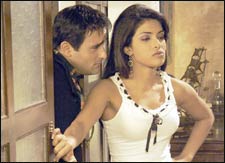 EDITOR RATING
3.0
Performances
Script
Music/Soundtrack
Visuals
NA
NA
NA
NA
Suggestions
Can watch again
NA
Good for kids
NA
Good for dates
NA
Wait to rent it
NA
Watching Aap Ki Khatir is like reading Pride And Prejudice as written by a 12th standard student in his own words as a compulsory school assigment - on a day when he has 3 other deadlines, all of them in other subjects which interest him more. The only differences between that student and the director Dharmesh Darshan are that Darshan has money to make a film out of it, and that the student would get more marks for his work.

Aap Ki Khatir has big names, and if they had a choice, they'd all want to go back to the beginning and look at all ways to improve upon it and see how the final product could actually have been - and would then decide to not do it. Yes, it's a surprise this one has come from a person who's made a reasonably interesting film like Raja Hindustani.

Anu (Priyanka Chopra) is staying in Mumbai away from her opulent family in London, after her marriage breaks down almost at the altar when her fiance Danny (Dino Morea) dumps her at the last minute. She cannot get over him, however, and when her sister Shirani (Amisha Patel) is to get married 3 years later, she decides to go to London for the marriage and make an attempt to hitch Danny again.

To play with Danny's head through the jealousy factor, she enlists Aman (Akshaye Khanna), a colleague that she hasn't really interacted with before, to play the role of her boyfriend for money. Aman is a cool and unruffled persona, and perhaps the only watchable thing about the film. Even as Anu keeps snubbing him repeatedly, he keeps a languid attitude and a cheery smile on.

They land in London, and Anu gets him to meet her parents (Lillette Dubey and Anupam Kher), sister and sister's fiancé Karan (Suniel Shetty), and starts her exercise at trying to get Danny interested in her again.

This is the first 15 minutes, and nothing happens in the film hereon.

You'd expect the usual - a slow romance building up between Aman and Anu a la Dil Hain Ke Manta Nahin, as the soul of a collage of forced interactions between them. Absolutely nothing of that sort. In fact, the way that they bond is completely illogical.

For example, on day one, Anu, dressed in a very tight top showing cleavage, comes into Aman's bedroom in the middle of the night, sits on his bed (and almost on him), and insists that she wants to talk to him about Danny. And just in the scene before that, she despises him for taunting and hitting on her, warning him to come nowhere near her.

More like this - there isn't a single character that is built logically. Aman is hitting on Anu playfully for half the film and she keeps pish-toshing him, and suddenly in a frame they are great friends making major physical contact. Then, Aman is towards the end praised as a highly decent guy by everyone, but he's done nothing to earn that all through - he's just doing his job as a hired boyfriend. Similarly, Danny is continuously made to look like he is pining for Anu, but what comes out in the end is completely different. And on the whole, there is nothing happening.

Akshaye Khanna is the saving grace in this heartbreak saga - he is charming and composed, and you develop respect for him in the end. Priyanka's character is sketched meaninglessly, so it's not her fault.

Suniel Shetty has just set a new precedent for himself in what roles he's willing to accept - just what is he doing here? Amisha Patel looks as lost as a kitten in an astronomy conference, and as far as bringing life to her role is concerned, it is a job for Julia Roberts, with full-time support from God. Only Lillette Dubey escapes with some grace.

On the whole, a film for people who can't wait till next week.
Share. Save. Connect.
Tweet
AAP KI KHATIR SNAPSHOT

ADVERTISEMENT
This page was tagged for
Aap Ki Khatir hindi movie
Aap Ki Khatir reviews
release date
Akshaye Khanna, Priyanka Chopra
theatres list
Follow @fullhyderabad
Follow fullhyd.com on
About Hyderabad
The Hyderabad Community
Improve fullhyd.com
More
Our Other Local Guides
Our other sites
© Copyright 1999-2009 LRR Technologies (Hyderabad), Pvt Ltd. All rights reserved. fullhyd, fullhyderabad, Welcome To The Neighbourhood are trademarks of LRR Technologies (Hyderabad) Pvt Ltd. The textual, graphic, audio and audiovisual material in this site is protected by copyright law. You may not copy, distribute, or use this material except as necessary for your personal, non-commercial use. Any trademarks are the properties of their respective owners. More on Hyderabad, India. Jobs in Hyderabad.