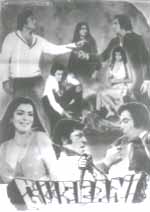 Chinmayi Sirsi / fullhyd.com
EDITOR RATING
3.0
Performances
Script
Music/Soundtrack
Visuals
NA
NA
NA
NA
Suggestions
Can watch again
NA
Good for kids
NA
Good for dates
NA
Wait for OTT
NA
For all the money that Feroz Khan (known to this generation as Fardeen's dad) is said to have poured into its production, for all the mercs that he smashed up and all the foreign shoots that he treated his cast to, Qurbani sure could have been a far better film than it is. I suppose it is a little unfair to judge a movie as old as this by today's standards, but then again, both creativity and movie-making aren't really that time-bound, are they?

Qurbani, as the name suggests, is a story of two friends who love the same woman. But it isn't as simple as that. Contrary to the usual way with which these themes are dealt, the focus here is as much on the parallel plots as it is on the "mere dost" aspect. Only, these parallel plots are so pathetic, one wishes Mr. Khan had stuck to the main theme.

Rajesh (Feroz Khan), a skilled thief, is captured by Inspector Khan and sent to prison for three years. His girlfriend Sheela (Zeenat Aman) promises to wait for him. While Rajesh is in prison, Sheela meets Amar (Vinod Khanna), who falls in love with her. That's the gist - told in an extremely leisurely fashion, sprinkled generously with action sequences, fights, villains, bad comedy and more action sequences.

The sub-plot tells of Daka, a criminal who robs his rich wife (Aruna Irani) of her jewels and sends her brother to jail. Wife swears revenge, and engages a confused Rajesh to do the job. Amjad Khan as the persistent inspector Khan makes a number of unwelcome appearances in the film, in the process taking up a lot of screen-space and testing your patience. And then there is this little girl - Amar's motherless child, who thankfully is quite sweet but is of no use to the story until she gets kidnapped by Daka.

Qurbani, as I said, is fragmented. Undue attention is paid to the fights and very less to the story, which as a result goes haywire. The performances are average, though one wishes Zeenat Aman had something better to do than to croon, swoon and moon over Feroz Khan. The saving grace of the movie is - you guessed it - its music. Nazia Hussan's immortal "Aap Jaisa Koi", the sultry "Laila O Laila", the yearning "Hum Tumhe Chahte Hai Aise" and the title song "Qurbani", all excellently composed by Kalyanji-Anandji, probably are the reasons for the film's long-standing popularity.

This Feroz Khan's partially narcissistic movie has nothing much to offer in terms of a viewing experience. Full of Bollywoodian clichés, the film's attempts at style and substance are half-hearted. Watch it only if you have an unending horde of patience or if you really enjoy its music.
Share. Save. Connect.
Tweet
QURBANI SNAPSHOT

ADVERTISEMENT
This page was tagged for
Qurbani Full Movie
hinde filme kurbne
qurbani full movie
filmkurbanidindi
Qurbani hindi movie
Follow @fullhyderabad
Follow fullhyd.com on
About Hyderabad
The Hyderabad Community
Improve fullhyd.com
More
Our Other Local Guides
Our other sites
© Copyright 1999-2009 LRR Technologies (Hyderabad), Pvt Ltd. All rights reserved. fullhyd, fullhyderabad, Welcome To The Neighbourhood are trademarks of LRR Technologies (Hyderabad) Pvt Ltd. The textual, graphic, audio and audiovisual material in this site is protected by copyright law. You may not copy, distribute, or use this material except as necessary for your personal, non-commercial use. Any trademarks are the properties of their respective owners. More on Hyderabad, India. Jobs in Hyderabad.