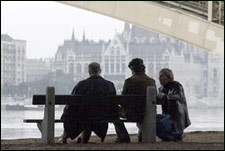 Samrat Sharma / fullhyd.com
EDITOR RATING
7.0
Performances
Script
Music/Soundtrack
Visuals
NA
NA
NA
NA
Suggestions
Can watch again
NA
Good for kids
NA
Good for dates
NA
Wait to rent it
NA
In 1972, a group of Palestinian terrorists belonging to an organization called “Black September” sneaked into the Munich Olympic grounds and took eleven Israeli athletes hostage. After a standoff that tensed and worried the whole world, the terrorists slaughtered the athletes, and left the games and their participants shattered. Israel decides to hit back at the terrorists and the masterminds behind the massacre, and that is where Munich truly begins.

Munich tells the story of Avner (Eric Bana), a Mossad officer who is given the mission to assemble a team and travel through Europe hunting down "Black September" agents. The team includes Daniel Craig and Ciaran Hinds, and during the course of their mission, they begin to realize the toll that revenge takes on their personal lives.

In a way, the film's name is a misnomer, as it is less about the events of Munich than about the repercussions. In that sense the film forcefully conveys the relevance of the events, not only in this film, but to our present world with its terror stricken cities and “War on Terror”. Spielberg has not only crafted a fine documentary on the events following the massacre, he has also effectively conveyed the sense of belonging in his storytelling about the world we live in today and the choices that face us daily.

Spielberg has told an emotional and psychological tale of a regular foot soldier following orders, and his ascension from dutiful soldier to cold-hearted killer and eventually to a paranoid and broken individual whose work has taken its toll on him. Despite this fact, the film remains an almost unemotional and very strongly unwavering, unflinching look at the violence that the events partook in, and that have since become a part of our lives increasingly.

In a scene that cannot be mistaken as anything but a strong statement, Avner's handler Ephraim (Geoffrey Rush) walks along a New York river bank, and the Twin Towers are clearly visible in all their majesty behind them. Constant moments like this dot the film, where Spielberg just ups the ante on focusing sharply on the thin line between terrorist and patriot.

And the emotional range the actors deliver is astonishing. Bana proves that he is under-appreciated as an actor - the range he shows in his transformation from the beginning to the ending with such gradually practiced ease astonishes you. Hinds plays the conscience of the team, and a lot of the weight of the spoken dialog is on his very able shoulders. And while Daniel Craig is fun, Geoffrey Rush plays his role with such playfulness, juxtaposing it with appropriate brevity, that he takes control of the screen every time he is in a frame.

As should probably be de riguer for a Steven Spielberg feature, this film looks and sounds fantastic. The cinematography catches the feel of ‘70s cinema with some truly great visuals, ranging from beautiful European vistas to up close shots of gore and debris as an aftermath of violence. Technically and aesthetically superior to last year's Oscar winner Crash, this film seriously brings to mind doubts over the veracity of last year's Academy decision.

As good as it is, the film is not short of a big flaw that many movies have been guilty of recently – weight. At close to 160 minutes, Munich is (and seems) too long to sit through. Watching each frame is a pleasure, yes, but the second act just becomes a terrorism/vendetta procedural with lengthy sequences and set pieces. There is unmistakable flab in the middle of this film, and it seems indulgent of the director to not trim it.

The length of the film also hampers the final climax when it comes - it almost feels anti-climactic because of the time you have spent seeing the killings and the meticulous execution. The implicit transformation of Avner's world, and the film's rejection of morals, seem to be the central themes, and they needed less reinforcement, and more denouement, in my opinion. With about 30 minutes less, the film could have been Spielberg’s best film ever.

However, the theme of the film is intact. Avner eventually finds himself in a world where a man with convictions is a man willing to become evil enough to protect them. This simple, effective realization slowly brings all the film's messages dawning upon you, and you can't help but admire the courage behind this film

“An eye for an eye will make the whole world blind.” The film strongly believes in this, and constantly brings up debates between both sides of the conflict. It leaves behind the explicit conflict between two nations and sensibilities, and instead steadfastly refuses to take sides, condemning both sides of violence and vengeance. This is the strongest thing going for it – it is such an antiseptic look at the world of these men, that it makes you cringe and empathize in turn. In short this is no mere film – it is relevant, important cinema.
Share. Save. Connect.
Tweet
MUNICH SNAPSHOT

ADVERTISEMENT
This page was tagged for
Munich english movie
Munich reviews
release date
Eric Bana, Daniel Craig
theatres list
Follow @fullhyderabad
Follow fullhyd.com on
About Hyderabad
The Hyderabad Community
Improve fullhyd.com
More
Our Other Local Guides
Our other sites
© Copyright 1999-2009 LRR Technologies (Hyderabad), Pvt Ltd. All rights reserved. fullhyd, fullhyderabad, Welcome To The Neighbourhood are trademarks of LRR Technologies (Hyderabad) Pvt Ltd. The textual, graphic, audio and audiovisual material in this site is protected by copyright law. You may not copy, distribute, or use this material except as necessary for your personal, non-commercial use. Any trademarks are the properties of their respective owners. More on Hyderabad, India. Jobs in Hyderabad.