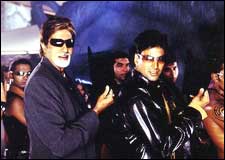 Ghazala Rizvi / fullhyd.com
EDITOR RATING
6.0
Performances
Script
Music/Soundtrack
Visuals
NA
NA
NA
NA
Suggestions
Can watch again
NA
Good for kids
NA
Good for dates
NA
Wait for OTT
NA
Here is our version of a movie that has many elements similar to others, but with none of the vitality, none of the excitement, and, mainly, none of the sex. Waqt outruns its time; it's the product you get when you try to catch too short a story in too long a time.

Waqt tries to equate good parenting with good kite-flying. You let your kite go, and then you reel in when you want to wind up. You make a brat and then pull the mat from under his feet. If this dictat on child psychology does not give you the jitters, Akshay's non-emoting and false on-screen tears will.

The film is the story of Ishwar Chandra Thakur (Amitabh Bachchan), who was once a postman, delivering people's letters. His boring, regular post changes with lightening speed - one day, God delivers a good one to him. Ishwar sells some toys, makes a billion, produces a brute, develops cancer, and is well on his way to a rich boredom of retired life.

His only son, Aditya, is a pampered brat who knows nothing about postmanship, or anything else about life. He is well-versed in the art of spending Rs. 15 lakhs per day, charting planes and playing with imported cars. Aditya's indulgences are only matched by those of Pooja's (Priyanka Chopra). She lives in a 12-bedroom flat, with a private and heated swimming pool within her bedroom, and finds Rs. 45,000 a reasonable price to pay for a dress. Which, coupled with her single-expression-carved wooden face, says loads about her brain - that is, if anybody gets past looking at her body.

Suddenly, Ishwar realizes that he has groomed a perfectly worthless son. He thinks, delays, stammers, and pampers Aditya some more. Then he gives him shock treatment. On the spur of the moment, Ishwar kicks Aditya out of his house, prematurely. No pregnant pauses, no unfolding of emotional baggage - just one abrupt kick, and Aditya is on the road to responsibility.

Nathu Bhai (Boman Irani) is Pooja's rich dad, with a richer sense of humor. A friendly rival, he is always at loggerheads with Ishwar Chand. The first half of the movie is a complete blast with Boman and his inflated ego contrasting with the stoic and unbatting-an-eyelid query sessions of Rajpal Yadav.

It's the second half, and the Big B takes over. Amitabh surpasses himself as he plays a smoky-eyed father, a dying man, a loved husband and a beleaguered grandfather-to-be. We can certainly say much more about Shaifali Shah's role than about Priyanka's, and without going into lascivious adjectives, too.

Waqt has successfully sidestepped the urge of big-tear films, which buss every clichéd character from every previous movie together. Director Vipul Shah has balanced out the brevity of characters with an abundance of accidental songs. But that should be overlooked as an occupational hazard of a movie-watcher.
Share. Save. Connect.
Tweet
WAQT SNAPSHOT

ADVERTISEMENT
This page was tagged for
Waqt film review
Waqt hindi movie
Waqt reviews
release date
Amitabh Bachchan, Akshay Kumar
Follow @fullhyderabad
Follow fullhyd.com on
About Hyderabad
The Hyderabad Community
Improve fullhyd.com
More
Our Other Local Guides
Our other sites
© Copyright 1999-2009 LRR Technologies (Hyderabad), Pvt Ltd. All rights reserved. fullhyd, fullhyderabad, Welcome To The Neighbourhood are trademarks of LRR Technologies (Hyderabad) Pvt Ltd. The textual, graphic, audio and audiovisual material in this site is protected by copyright law. You may not copy, distribute, or use this material except as necessary for your personal, non-commercial use. Any trademarks are the properties of their respective owners. More on Hyderabad, India. Jobs in Hyderabad.