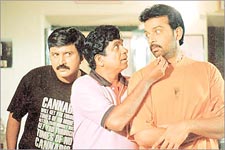 Is there a movie called Golmaal? How come I never heard of it? Should I watch it? These are some questions you face before watching Golmaal - and they are nothing compared to the thousands of questions you have after watching the movie. In order to make it easy for all of those who watched, who didn't and who came in late, here are answers to some Frequently Asked Questions about Golmaal.

What is Golmaal and why was it made?

It's a Telugu movie and was made with the sole noble intent of giving something to the public without expecting anything in return.

Is there a Golmaal here? Why should anybody do something without expecting anything?

There is no catch here. Since the movie has been lying in the cans for over three years now and we have actors like JD who are so ancient that we can perform radio-dating on them now, we are not expecting anything. 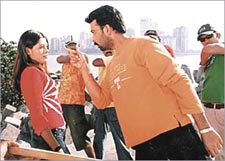 Why should I watch Golmaal?

What will I get if I do?

Up to two hours of sleep or upto one hour of bodily cramps, whichever is lesser

If I don't like Golmaal, can I walk out? Yes, you may, but you will not be refunded the ticket fare. However, you can save your friends' money by spreading the good word about the same.

Now that you are clear about Golmaal, here's a virtual tour for FREE! This tour will take you only two minutes, and at the end of it, you are spared the effort of having to watch it for two hours.

Two friends, Amir and Amar, a Muslim and a Hindu, want to swap places for their convenience. But Amar finds it hard to fit into the slot of a Muslim, and Amir finds it hard to act as a chaste Brahmin. The ensuing confusion results in a chaos called Golmaal. Hope you enjoyed our quick tour.

Golmaal has not a single redeeming point. JD is outdated, and we can't relate to the other actor. There are two girls who fall into the 'never before, never again' category. They will be one-film blunders.

That the movie was made at least four years ago is clear because we're shown that Amir (JD) is going to the US to earn big bucks because there's a software boom there. The music is so pathetic that you want to sing something aloud to keep yourself from falling asleep.

JD has barely any role in the movie though he is the one who's seen in the posters and promos - it's Ramesh Arvind who has the chunk of the movie, and he does a decent job. Brahmanandam too has a neat role. But the only saving grace is the laughs worth Rs. 8 or four minutes, whichever is lesser. 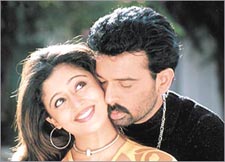 ADVERTISEMENT
This page was tagged for
Golmaal telugu movie
Golmaal reviews
release date
J D Chakravarti, Ramesh Arvind
theatres list
Follow @fullhyderabad
Follow fullhyd.com on
About Hyderabad
The Hyderabad Community
Improve fullhyd.com
More
Our Other Local Guides
Our other sites
© Copyright 1999-2009 LRR Technologies (Hyderabad), Pvt Ltd. All rights reserved. fullhyd, fullhyderabad, Welcome To The Neighbourhood are trademarks of LRR Technologies (Hyderabad) Pvt Ltd. The textual, graphic, audio and audiovisual material in this site is protected by copyright law. You may not copy, distribute, or use this material except as necessary for your personal, non-commercial use. Any trademarks are the properties of their respective owners. More on Hyderabad, India. Jobs in Hyderabad.