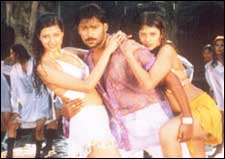 EDITOR RATING
3.0
Performances
Script
Music/Soundtrack
Visuals
NA
NA
NA
NA
Suggestions
Can watch again
NA
Good for kids
NA
Good for dates
NA
Wait to rent it
NA
The most cruel thing that you can do to a movie-goer is to show him the "Intermission" message when he is expecting the "The End" message. 786 - Khaidi Prema Katha is at least 150 minutes long (that's when we finally passed out), and you spend so much time and effort in waiting for it to end, you become perfect at it. Only one thing can be worse, and that is reliving it all to type out this stupid fullhyd.com review.

The year is 1566. At least that's what it looks like, considering how old the plot is. The film starts by showing a deathrow convict in prison who's meditating for no known reason. Then he starts beating up some goons in the jail, at the end of which he says something like, "True love is immortal, and no one can kill it." He says it in the same tone as you would say, "Can you pass the salt?" This is when the first half ends. You wish.

The jail is then visited by Poonam, the daughter of the DSP, and her friends, who want to interview some prisoners. You're worried about where the rest of their clothes are, thereby completely missing the bigger picture - which we did, too. We are still trying to find out what it is. Anyway, Poonam is impressed by Shashi's dialogue delivery, which proves that somebody somewhere has been created to appreciate everyone's dialogue delivery. She digs deeper into his life to find the root cause for his ending up here, and comes up with nothing interesting. So she strips further and sings some songs.

Anyway, it transpires that Shashi was in love with Yana, the daughter of a rich guy who frames him in a murder rap and lands him on the deathrow. This is the problem - why can't they just tell this to us instead of making a whole movie about it? Well, Poonam gets him to escape from prison, and he kidnaps Yana to tell her the truth - that he is not a murderer, that her dad is the real villian, and that nothing lasts forever, even a scene where she has to wear clothes.

Anyway, he skunks the villians and proves his innocence, but it's too late - the audience have already left, some of them in just their undergarments and screaming hysterically. Shashikant does not use a dupe for the action scenes - he should, though, for all the other scenes. Poonam Bartake and Yana Sheik need not, however, use dupes for the action scenes - there aren't any scenes where they act. Brahmanandam, AVS and M S Narayana feature in routine comic sidetracks, and do not die in the end. The music is inevitable.

The film has an A certificate. Watch it when you become an adult.
Share. Save. Connect.
Tweet
786 KHAIDI PREMA KATHA SNAPSHOT

ADVERTISEMENT
This page was tagged for
786 Khaidi Prema Katha telugu movie
786 Khaidi Prema Katha reviews
release date
Sashikant, Yana Sheik
theatres list
Follow @fullhyderabad
Follow fullhyd.com on
About Hyderabad
The Hyderabad Community
Improve fullhyd.com
More
Our Other Local Guides
Our other sites
© Copyright 1999-2009 LRR Technologies (Hyderabad), Pvt Ltd. All rights reserved. fullhyd, fullhyderabad, Welcome To The Neighbourhood are trademarks of LRR Technologies (Hyderabad) Pvt Ltd. The textual, graphic, audio and audiovisual material in this site is protected by copyright law. You may not copy, distribute, or use this material except as necessary for your personal, non-commercial use. Any trademarks are the properties of their respective owners. More on Hyderabad, India. Jobs in Hyderabad.