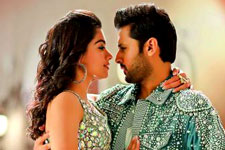 Chaitanya Karthik / fullhyd.com
EDITOR RATING
5.5
Performances
Script
Music/Soundtrack
Visuals
6.0
5.0
5.0
7.0
Suggestions
Can watch again
No
Good for kids
Yes
Good for dates
Yes
Wait to rent it
No
There are entertainers that promise to keep tickling your funny bone, and more often than not they fall short of the mark because they try to pack it all in with punch dialogues aplenty that fail to distinguish between humour and silliness. Thankfully, Bheeshma doesn't belong to that category. It sets the bar pretty low with a protagonist who isn't taken seriously by anyone including himself, and it's not that difficult for us to take the cue and follow suit.

Bheeshma (Nithiin) is a single guy who's more than ready to mingle. He is a degree dropout and his hobby is making memes - only, if you look at the memes he makes, you'd be glad that they don't show up on your newsfeed. But the good thing about this is that there is Vennela Kishore who feels the same way as the audience.

Anyway, Bheeshma is desperate to get rid of his single tag, but his attempts to that end keep failing repeatedly, until he finds Chaitra (Rashmika), whose discernment is questionable.

Even though he lies to her about being an ACP to impress her and keeps constantly staring at her midriff (which is absolutely okay because it is the hero who is doing it and because surely it is absolutely fine to be creepy if you love someone even if they don't love you back), she eventually falls in love with him. If this isn't just what society needed, then we don't know what is.

Then you have another Bheeshma (Anant Nag), a farming giant, who uses a cutting-edge technology that has been developed by Raghavan (Jisshu Sengupta). Bheeshma is the quintessential nice guy who uses the millions of dollars he has made to uplift the downtrodden. Raghavan is the bad guy, the opposite of Bheeshma.

The younger Bheeshma enters the fray and is made the CEO of the older Bheeshma's company because any guy who is good and can do anything for the girl he loves is absolute CEO material. You can't help but wonder how the older Bheeshma, who is the multi-millionaire moral compass of the plot, made so much money despite his hiring process. In case you are still curious despite the irrationality of the plot, do watch the movie.

One reason why Bheeshma works is the lightness infused into the script. And because it makes it clear that we need not brace ourselves for intelligent jokes, it makes for a partly hilarious ride. Raghu Babu and Vennela Kishore steal the show with their performances - they really add colour to this inherently bland movie. But as is the norm with many filmmakers being insensitive, this movie is also full of derogatory comments about weight and complexion. And these "jokes" are so old that they would make cobwebs look shiny. But you can't really blame only the filmmakers, when the audiences still buy these jokes.

Nithiin's character reminds you of his role in Gunde Jaari Gallanthayyinde - only, in GJG his character had a lot more depth than the one in Bheeshma. Here, he is just lucky. He also adopts a unique slang that makes his dialogues sound funnier than they actually are, and there's a certain ease with which he reprises this role. He isn't that convincing when he's beating up goons. Hopefully, he chooses roles that bring out his versality as an actor.

Rashmika got trolled a lot for her role in Sarileru Neekevvaru, and her performance here too can pave the way for more memes. It's not a bad performance per se - she is great with comedy - but a role like this doesn't do justice to the talent.

Speaking about talent, actors like Naresh, Brahmaji and Sampath Raj are wasted, and do not really have much to do.

The songs are randomly placed, and it feels like the makers kept suddenly remembering that Rashmika is a part of the story. The breaks sort of take your interest away and make you forget about the story, which is already pretty lacking. The cinematography makes for beautiful locales and ensures that your mood doesn't change from "Why am I still tolerating this?" to "Chuck this! I'm going home."

Overall, Bheeshma is just a time-pass movie, as long as you set your expectations pretty low.
Share. Save. Connect.
Tweet
BHEESHMA SNAPSHOT 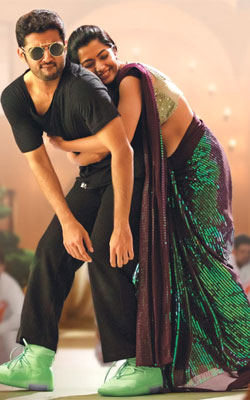 ADVERTISEMENT
This page was tagged for
bheeshma online watch
Bheeshma telugu movie
Bheeshma reviews
release date
Nithiin, Rashmika Mandanna
Follow @fullhyderabad
Follow fullhyd.com on
About Hyderabad
The Hyderabad Community
Improve fullhyd.com
More
Our Other Local Guides
Our other sites
© Copyright 1999-2009 LRR Technologies (Hyderabad), Pvt Ltd. All rights reserved. fullhyd, fullhyderabad, Welcome To The Neighbourhood are trademarks of LRR Technologies (Hyderabad) Pvt Ltd. The textual, graphic, audio and audiovisual material in this site is protected by copyright law. You may not copy, distribute, or use this material except as necessary for your personal, non-commercial use. Any trademarks are the properties of their respective owners. More on Hyderabad, India. Jobs in Hyderabad.