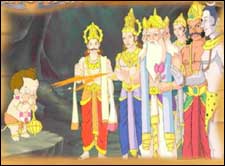 Megha Mehta / fullhyd.com
EDITOR RATING
7.0
Performances
Script
Music/Soundtrack
Visuals
NA
NA
NA
NA
Suggestions
Can watch again
NA
Good for kids
NA
Good for dates
NA
Wait to rent it
NA
“Jai Hanuman Gyan Gun Sagar, Jai Kapees Tihu Lok Ujagar” begins the background score, and you know you are about to be transported into a world of divinity, where there is always only one victor in the battle against evil. But before you can yawn in anticipation of a ‘Ramayana Revisited’, you take one look at the cute little Hanuman in this animated saga, and it’s not just evil that is defeated – even you are won over!

This 100-minute film has over 40 individual characters, and has been recorded officially as India's first indigenous animation film in the Limca Book of Records' 2004 edition. A Percept Picture Company's production in association with Silvertoons, ‘Hanuman’ hopefully marks the beginning of many more such films in its genre.

The film has the endearing little Hanuman narrating his own tale. Born to an apsara Anjani and Vayu, Hanuman is first named Maruti. Buoyant and mischievous as a kid, on one occasion he actually mistakes the Sun for a succulent fruit and chases it. The gods erroneously punish him for his feat, but when they are later told about the child’s celestial birth, they decide to bless him with unique powers. The supremely intelligent and gallant child is then renamed Hanuman, and is destined to serve the Lord Rama.

Thus starts Hanuman’s journey in Lord Rama’s service. During one of his sessions in meditating the Lord’s name, he chances upon the Lord himself. After introducing himself as Lord Rama’s devotee, Hanuman finds that Lord Rama is aggrieved over the abduction of his wife Sita by the demon-king Ravana. He then decides to find Sita and help the Lord in rescuing her from Ravana’s kingdom, in a tale that you have heard in M S Rama Rao’s voice so often.

Only, the plot revolves around too many sub-characters, and unless you are a Ramayana pro, you’d find it difficult to have your memory sustain each of their names. With all due respect, Hanumanji might have lived a really long life and seen many a significant event during its course, but deciding to cram all of them into a little, 1½ hour film is certainly an overload.
The audience is expected to have exemplary knowledge of the Ramayana and the various characters it enmeshes, and the screenplay seems like a whole bunch of short stories pulled together with some effort to avoid being incongruous, the only common factor being the involvement of Hanuman in all of them.

Nevertheless, the hanky-panky that Hanuman gets involved in is heart-warming to watch. And there are some genuinely rib-tickling moments, humorous though they perhaps weren’t intended to be. For example, the scene when Ravana is preparing for battle reminds you of the quintessential shot in most movies where the camera covers the heroine through each step of her makeup and accessorizing process, all in a bid to tantalize the audience!

The visuals are a commendable effort, and with the release of such movies you know for a fact that Bollywood is ready for a major transition. And of course, this superhero is sure to enchant children and elders alike!
Share. Save. Connect.
Tweet
HANUMAN SNAPSHOT

This can be considered as a milestone to the Indian Animators.

Hope there would be much more entertainment in the future...

ADVERTISEMENT
This page was tagged for
Hanuman hindi movie
Hanuman reviews
release date
Mukesh Khanna as the voice of Hanuman
theatres list
Follow @fullhyderabad
Follow fullhyd.com on
About Hyderabad
The Hyderabad Community
Improve fullhyd.com
More
Our Other Local Guides
Our other sites
© Copyright 1999-2009 LRR Technologies (Hyderabad), Pvt Ltd. All rights reserved. fullhyd, fullhyderabad, Welcome To The Neighbourhood are trademarks of LRR Technologies (Hyderabad) Pvt Ltd. The textual, graphic, audio and audiovisual material in this site is protected by copyright law. You may not copy, distribute, or use this material except as necessary for your personal, non-commercial use. Any trademarks are the properties of their respective owners. More on Hyderabad, India. Jobs in Hyderabad.